Cooking Then and Now

Cooking Then and Now
Martha Rogers

I majored in Home Economics at Baylor University and graduated in 1957 with a Bachelor of Science degree so the opportunity to talk about foods, kitchens, and appliances is a natural for me. The place of food in our diets began in the Garden of Eden when Adam and Eve had their pick of fruits and vegetables that grew in abundance.

Before the invention of fire, man consumed raw foods that he hunted and killed. Archeologists have found charred wood and seeds in Israel that date back 790,000 years. So even though the exact date of the discovery of fire isn’t known, evidence of its use goes back a long way. That discovery changed man’s way of life and his dietary habits. Those changes continue to evolve today with new methods of cooking, new health guidelines, and new recipes for the bounty of food we have.

One important note is that not all foods are found in all countries. America has been able to reproduce most of the foods from other nations, but many are still imported. Foods native to our own land are corn, beans, and squash that were staples in most Indian diets.

Explorers discovered that Indians were as diverse as the cultures in Europe and Asia and lived on one continent. Their languages and rituals as well as their diets varied from region to region. As they explored, they found the Indians of the northwest coast areas of what is now Oregon and Washington had a diet of fish and traded that fish for the seeds and fruits from the lower, more fertile regions of the lower west coast.

Back then, the food had to be planted, grown, harvested and then cooked. Animals had to be grown, slaughtered, preserved, and then cooked. Although we still have farming and ranching today and a bountiful supply of fruits and vegetables at the supermarkets and from Farmer’s Markets, many of us rely on the freezer for meals that can be zapped in the microwave oven for a minute or so.

I am one of those who still love to cook and have an extensive collection of cookbooks. Still, I find myself using convenience foods when I’m in a hurry. I would imagine that most of you do too.  Starting with a recipe and fresh ingredients to create a cake, casserole, pastry, cookie, or other dessert can be rewarding, but we still have modern appliances to make our job easier.

Imagine trying to cook some of your favorite recipes over an open fire. No ovens, no stove tops, no fireplaces or big iron kettles, all you had were sticks and whatever utensils could be carved and could withstand fire or heat. Even as stoves were invented and developed, they had none of the “bells and whistles” of our modern day stoves. 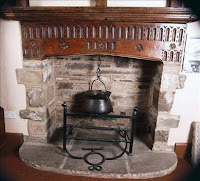 The early settlers used open fireplaces to prepare their meals and worked hard to have food for the table. Soups and stews as well as many vegetables were cooked in iron pots over open flames. Baking was done over the flames as well in cast iron pan that could be covered. The fireplace was the main focus of the home as it was usually the only source of heat for winter. The kitchen became the hub of the home with meals served there as well as studying, reading, and family time around the kitchen table.

Of course wealthier families had servants to take care of the cooking for them and separate rooms for the kitchen evolved. Down south, the kitchens were in a separate building either just outside the back of the house or to the side. As the kitchens grew in size, so did the meals and types of food served from the simple suppers of the prairie home to the elaborate dinners of the southern plantation home.

As the years went by, inventors dabbled in all types of inventions to make life easier. In 1740, a Franklin stove came into use, but still used wood as its source of fuel. Food could be cooked in pot on top instead of dangling over the fire.

In the 19th century when wagon trains traveled west, once again travelers cooked over open fires as people sat around the campfires and ate. Mealtime was a time of fellowship as well as a time of fueling the body.

All through the 19th century, and into the 20th, new and better methods of cooking entered the home. Some replaced wood with coal and then gas came along. Gas powered stoves are in use today as well even though electricity came along and gave us the modern electric range. The convection oven gave us more options and then the microwave oven came on the scene and our methods of cooking changed even more. Gas stoves are still the best to have when the electricity goes out in a storm and all other cooking appliances don't work.

When I met my husband, he worked for a gas utility company and I worked for an electric one. When we built our first home and installed built-in oven and surface units, I chose to have electric ovens and gas surface top. That way, I'd always have a way to cook. Sure came in handy during a number of hurricane strikes along the upper Texas coast.

I hope this little foray into the past makes you glad to have all the modern conveniences now available for preparing meals for our families.

Martha’s book credits include two four book historical series, Winds Across the Prairie, published in 2010 and 2011, and Seasons of the Heart, in 2011 and 2012 as well as Christmas at Holly Hill in 2012. A new series is scheduled for 2013 all with Realms of Charisma media. Martha is also one of nine authors in the Bloomfield series published by B&H. Martha and her husband live in Houston, Texas where they are active members of First Baptist Church. 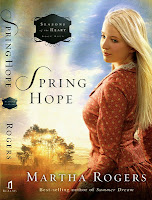 Be sure to leave email address with your comment to be in the drawing for a copy of my book, Spring Hope.

Libby Cantrell’s life has gone from bad to worse since her mother’s death. As a deputy, Cory Muldoon sees it as his duty to find out the truth about her even as he is attracted to her. Will he be able to accept her as she is now and truly forget and forgive her sordid past?