Thomas Jefferson and The Big Cheese

Hi.  Winnie Griggs here.  I subscribe to one of those “This Day In History” Calendars.  Not only do  I enjoy reading the interesting little tidbits to be found there, but it’s also a great idea sparker for future stories.

When I checked out the entry for today, this is the note I found:

Mar 26, 1804:  On this day in 1804, President Thomas Jefferson attends a public party at the Senate and leads a diverse crowd in consuming an enormous loaf of bread dubbed the “mammoth loaf.”

Intrigued, I had to do some follow-up research and came across an even more intriguing tidbit - that the loaf was baked to go with a mammoth cheese that had been given to the president two years earlier.  And for the record, I’m using the word mammoth deliberately, because that’s how these items were described at the time.  I found a footnote that stated Americans of this period were enamored with the term due to fascination with the discovery of a giant woolly mammoth skeleton in in 1801.

But I digress.  This massive wheel of cheese was the brain child of John Leland, the Elder of a Baptist  congregation made up of the staunchly Republican citizens of a farming community located in the Berkshire Hills of western . The goal was to recognize and commemorate ’s long-standing devotion to religious freedoms.

It was reported that the milk from 900 cows went into the making of the cheese and that it was formed in a cider press that measured six feet in diameter.   The final product, once cured, measured more than 4 feet in diameter, 13 feet in circumference, 17 inches high and weighed 1235 pounds. 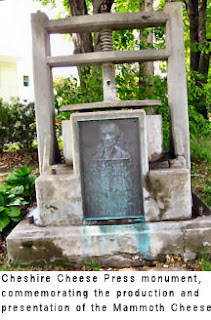 Transporting this huge cheese wheel from to was no small feat.  It was moved by wagon and sleigh to the where it was loaded into a sloop.  At it was then loaded into a wagon once again for the remainder of the trip.  All told it took about a month to complete the journey.

John Leland presented it to on New Year’s Day 1802 at a White House ceremony. Leland declared it “the greatest cheese in , for the greatest man in .”   In part of his speech, the Baptist Elder praised for the “singular blessings that have been derived from the numerous services you have rendered to mankind in general.”  , in turn, praised the people of Leland’s congregation for the "extraordinary proof of the skill with which those domestic arts which contribute so much to our daily comfort are practiced by them."   Because President Jefferson adhered to a policy to refuse gifts while in office, he paid Leland $200 for the cheese.

The cheese lasted for quite some time as it was gradually consumed at various White House functions over the next two years.  Finally, on March 26, 1804, the President attended the above-mentioned party designed to rally support for a naval war with the . A Navy baker wheeled in the huge loaf of bread as well as the remnants of the “mammoth cheese” and large quantities of roast beef and alcohol.  It is assumed that the last of the cheese  was consumed during the event.  An alternate theory is that after this party, the remnants were disposed of in the .

So, is this a bit of history you were already familiar with?  And why do you think we have such a fascination with things of an unusual size?  Is it just the novelty of it?  Or something else?

Now for the giveaway!


Any of you who comment on this post today will get their name in the hat for my drawing.  I’m giving away a copy of my RT Reviewer’s Choice nominated book Handpicked Husband along with a booklovers pin.

And don’t forget about our Grand Prize Drawing happening at the end of the month.  For every day you post during March you’ll get another chance to have your name drawn for one of the following:

Comment on every post in the month of March and earn 31 entries!
Posted by Winnie Griggs at 1:30 AM