Ghost Town Memories: Where the West was Wildest

The track beneath my tires wended its tortuous way through the foothills of the eastern Sierra Nevadas. Other vehicles shared the road, some taking corners on two wheels, others crawling with too much caution. I chose a moderate approach, passing drivers with hands locked on steering wheels but giving way where possible to the restless herd behind me. Vehicles accelerated past, churning loose gravel as they hurtled through space and time, the drivers giving little regard it seemed for sanity. You had only to look into the ravine below to understand the dread of the slower drivers. I didn’t want to wind up there either, although the drop was less deep than many I’d encountered while driving through Yosemite National Park yesterday. At least today cars weren’t barreling towards me head-on in the middle of a narrow two-lane road with certain death mere inches from my tires. I'd arrived last night at the safety of the hotel on a wing and a prayer and possibly the last of my shredded nerves.

I’d rather have lingered in bed, then afterwards warmed my belly with repeated cups of coffee at the restaurant over plate-sized chocolate chip pancakes than venture forth on a new adventure, and yet the children in our family group were not to be denied. My own curiosity drew me onward until the ghost town of Bodie sprawled through dry grass and sagebrush before me. Built on gold, liquor, opium dens and houses of ill repute, Bodie was renowned for its lawlessness. Tweet This! Its reputation was so notorious that a little girl whose family moved to Bodie from San Jose is said to have prayed, "Goodbye, God. We are going to Bodie in the morning." (Source: Daily Bodie Standard, Bodie, CA, 13 February 1879)

I’d once visited this place as a young child on a family trip and had come away with the impression of sun-bleached buildings, scorching sunshine, and an abiding sense of history. Nothing seemed to have changed in the intervening years. Buildings over a hundred years old still baked in the heat of a sun that necessitated the application of sunscreen and repeated gulps from our water bottles. There was much to see, far more than we could possibly take in during the hours available for our visit. Many of the houses had been abandoned with the furnishings and paraphernalia of daily living intact, right down to wire hangers in the closets. Antique litter strewed the ground--the remains of a washbasin lay in the open, a rusting bucket sat beside a house, and a mining cart crouched in the grass.

Peering into windows revealed peeling wallpaper, coverlets on beds, and an antique potty chair. Tweet This! I peered into a brick strongroom and gasped. The safe inside had miraculously escaped decay. I put my arm through the grating to snap a picture of the safe still within the building. How many visitors have missed this discovery? And yet there was much we lacked time to see. Although only a fraction of the original buildings still stand, Bodie stretches into the surrounding hills with a scope that boggles the mind. Tweet This!


I posed for pictures in the doorway of a crumbling structure. When a sharp buzzing sound alerted me to wasps or bees, I left it in haste. Although much of Bodie has fallen to nature, the remaining buildings boast details such as carved doors and tin ceilings and are preserved in a state of arrested decay. This means that roofs and windows will be replaced as needed and standing buildings will not be allowed to collapse. Bodie is preserved as a ghost town museum. Tweet This! 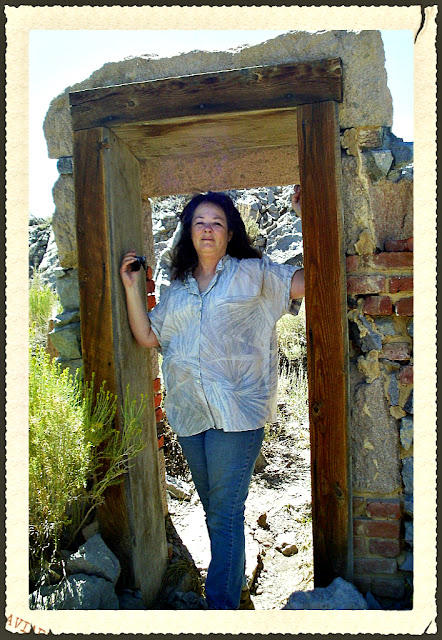 I had to wonder how anyone could survive living here in the innervating summer heat, let alone the winter cold. Although most of the structures we explored were locked, we grew adept at ducking into their waning shadows for relief from the merciless sun until empty water bottles and the wails of our youngest member, aged two, drove us to the former miner’s hall, now a museum and visitor center. Inside among other surprises waited two hearses, presumably employed often in this rough and ready mining camp.
The west was reportedly wildest here. And yet, on the way back to the car for the arduous return journey, we passed a church.

God apparently followed that little girl to Bodie.
This post has been brought to you by Janalyn Voigt. To see more pictures from Bodie and read the travel journal  Janalyn wrote at the time she visited Bodie, go to Ghost Town in the Shadow of the Sierra Nevadas at Janalyn Voigt's Fantasy Worlds site. 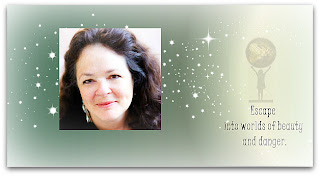 Receive updates from Janalyn's research and travels absolutely free by subscribing to the Creative Worlds newsletter and/or blog. As a bonus gift, you'll receive access to three of Janalyn's original photographs for use as computer wallpaper. Sign up is easy and secure, so don't hesitate. Click here to escape into Creative Worlds!