Kathleen Y'Barbo's March 1st post "Taking the Waters at the Crescent Hotel in Eureka Springs, Arkansas" brought back delightful childhood memories. Not far from my hometown of Piggott, AR, Eureka Springs, was a favorite family day-trip on special occasions. Kathleen's article made me think about what's in my own Colorado backyard.

Once called "Pah gosah" by the Ute Indians, the Great Pagosa Hot Springs' boiling, healing waters reach 145 degrees Fahrenheit. It's considered the deepest hot springs in the world. Although too warm for safe human use, "water that has a strong smell" is still a popular visitor attraction in Pagosa Springs, Colorado. The strong smell emanates from a very high mineral content and is reminiscent of a million rotten eggs. That number of eggs might be inaccurate. It may be closer to two million. 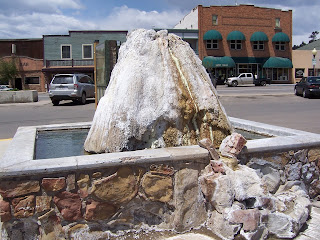 No, this isn't the therapeutic natural mineral hot springs, just one of the geothermal fountains along the river walk. Turn around and you'll see the San Juan River and the spas benefiting from the healing waters. 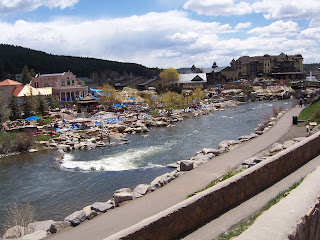 Bathing in or drinking the mineral is said to cure everything from rheumatism to obesity. The three spas in use today draw water from the same heated underground aquifer that feeds the Great Pagosa Hot Springs. Twenty-three naturally heated, family-sized outdoor pools of various temperatures are available at The Springs Resort & Spa. Men's and Women's indoor hot baths and a year-round heated outdoor swimming pool can be enjoyed at the Healing Waters Resort and Spa. Rest assured, the rooftop pools and indoor tubs of the Overlook Mineral Springs Spa, with its Victorian ambience, are as therapeutic as they are charming. 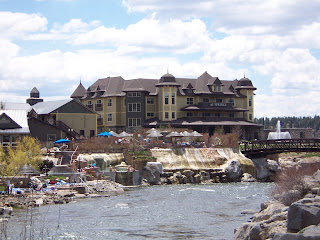 The San Juan River courses through the heart of down town. 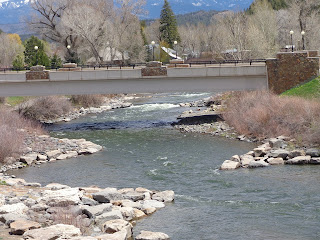 Along the San Juan River Walk, geothermal water flows in three fountains created by the town of Pagosa Springs. Yes, they're hot to the touch. Won't take you long to examine those fountains.

Now, before I start sounding like a member of the Chamber of Commerce, you should know that Pagosa Springs is surrounded by Southern Ute Indian lands and the San Juan National Forest. Approximately 65% of county land is either forest or Indian land. For centuries, Pagosa Springs was the center of dispute between the Navajos and the Utes. Both tribes used the springs ("pah"-water, "gosah"-boiling) and small battles often erupted. In 1866, the Utes chose Albert H. Pfieffer, a New Mexico Indian agent, to be their tribe representative in a one-on-one battle with a Navajo warrior. Pfieffer killed the Navajo and the Utes took control of the springs. In 1880, the U.S. government claimed ownership of the Springs and a few years later the town of Pagosa Spring was founded.

But wait, there's more — The Utes were not the first native inhabitants around Pagosa Springs. According to the Chimney Rock Interpretative Association and the archaeological evidence, the first inhabitants were the ancestors of the modern Pueblo Indians. Other tribes, including the Navajo and Apache, frequented the hot springs. Early Anglo explorers found well worn trails converging at the Springs. Sweat lodges were located around the seeps and cavities nearby.

Legends abound in the mountains around "Pah gosah" and $5 million in gold is said to be still waiting to be found. Only two Frenchmen had maps to the hidden gold. They never claimed it.  Maybe it's in my own backyard! 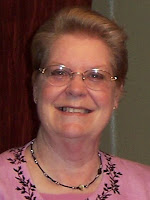