MUSTANGS — Horses of the Old West

Hello again, readers of the Christian Fiction Historical Society blog! I have a book out this month, HILL COUNTRY CATTLEMAN, published by Love Inspired Historicals. Horses figured prominently in its plot, since my hero, Raleigh Masterson, is a cowboy who rode a blue roan stallion, and its heroine, Violet Brookfield, and English aristocrat, foxhunted (or "rode to hounds) back in England and was loaned a pinto mare by the hero to ride while she visited in Texas. 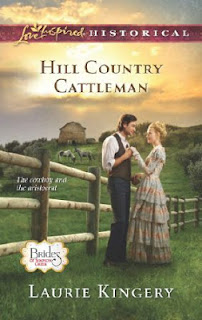 So horses of the Old West seemed like a good topic to explore for this month's blog. Of course, there isn't room to cover all the horses that appeared in the "Old West," but the two most frequent types that would be encountered were the mustang.
Horses were unknown in the Americas until the coming of the Spanish explorers such as Cortez. Inevitably, some of the horses got loose and began to gather in herds and to breed in the wild, and became known as mestengos, derived from the Spanish word mesteño, meaning "stray livestock animal." 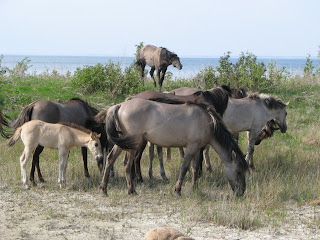 --By Lynne Gerard (Own work) [CC-BY-SA-3.0 (http://creativecommons.org/licenses/by-sa/3.0)], via Wikimedia Commons--
The Plains Indians that we think of as such great horsemen were afoot until they saw how the Spanish put them to many uses, and they lost no time in stealing them from the Spanish or capturing many of those who ran loose. They first used them to replace dogs as pullers of travois, a platform or net supported by trailing poles, which could transport their belongings as well as children and the elderly. It wasn't long before they learned to ride horses into battle and in buffalo hunts, and became the feared warriors that we remember today. 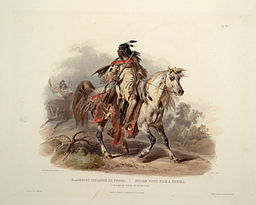 Mustangs are usually compact, strong boned and hardy, which made them valuable to westerners in need of horses. Herds were often captured and those fit for riding were "broken" to saddle—often by riding them until they'd gotten the bucking out of their systems, even if it meant repeatedly re-mounting horses that had just thrown their riders. The wise horseman, of course, gentled a horse gradually and kindly, but many of the cowboys' horses were only "green-broke" at best and had to buck a little before they settled down to the job at hand—cutting cattle, driving cattle to market, chasing down strays, and so forth. 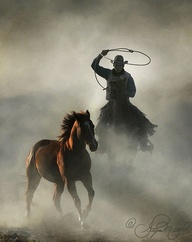 The modern mustang no longer has the genetic makeup of the Iberian horse. Other breeds have intermingled with it, either by getting loose or by deliberate attempts by ranchers to refine the feral horse. The American Mustang Association (AMA) was formed in 1962 in San Diego, California to preserve & document the pedigrees of American Mustang horses. Horses are registered to meet certain standards & measurements in the hopes of preserving the characteristics of the original Spanish bloodlines. The breed standard states that the horse can be any color although more traditional Spanish horse coloring is valued including roan, dun and buckskin. It is a wild animal, tending to be stubborn, high-spirited, and full of vigor. 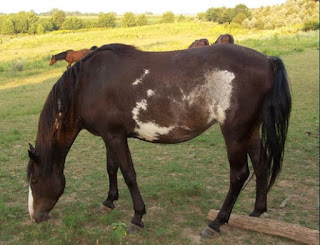 --By Mcgregorranch at en.wikipedia [Public domain], from Wikimedia Commons--

In modern times, mustangs were used as a resource by the military or captured for use as food, especially dog food, or poisoned and shot from helicopters, because some ranchers felt their free-roaming ways damaged crops or decreased grazing available to domestic animals. "Mustanging" was graphically shown in the John Huston movie, "The Misfits," starring the late Clark Gable and Marilyn Monroe.
Fortunately, the mustang is too much of a symbol of freedom and an icon of the Old West to continue unprotected forever. The mustang population had been greatly reduced by the time the first federal wild free-roaming horse protection law was enacted in 1959, the "Wild Horse Annie Act", which prohibited the use of motor vehicles for hunting wild horses and burros. Protection was increased further by the Wild and Free-Roaming Horses and Burros Act of 1971, which provided for protection of certain previously established herds of horses and burros. Today, the Bureau of Land Management is the authority that oversees the protection of mustangs on public lands, with the Forest Service assisting on additional wild horse and burro territories.
The protection of the mustang by law remains a sore point with some ranchers. In order to prevent overpopulation, some mustangs are periodically captured, sometimes by use of a "Judas horse" who leads bands of mustangs into a pen and is then released.  Most horses that are captured are offered for adoption to individuals or groups willing and able to provide humane, long-term care after payment of an adoption fee of at least $125. As of 2010, nearly 225,000 Mustangs have been adopted.
I might never have had the opportunity to see real mustangs up close, but my stepdaughter and her family live about halfway up on a mountain near Cold Creek, Nevada, about an hour north of Las Vegas. Here, on the edge of public land, Here mustangs live unmolested, often grazing on the lawns of the delighted inhabitants, who provide hay in the winter so that the mustangs will not grow hungry. 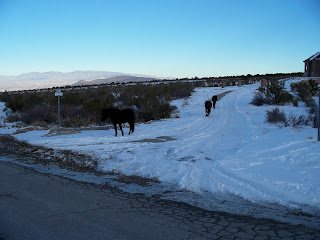 I hope you've enjoyed this overview of the American mustang of the Old West. Because this is the publication month for my book, HILL COUNTRY CATTLEMAN, there will be a drawing and one lucky commenter will win a copy!
Best of luck and blessings,
Laurie Kingery