The Day the War Stood Still


The Armistice in April of 1865 called a truce and ended the War Between the States, but the damage had been done and healing would take years for this wounded and bleeding nation. At that time thousands of young men were released or “exchanged” from prison camps all over the north and south. We read of the atrocities of Andersonville and Pt. Lookout and know that so many of the nation’s young men died in those places in addition to those who died on the battlefield. 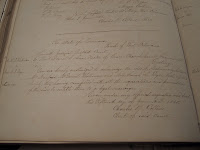 My great-grandfather was one of those released from Pt. Lookout, Maryland in April of 1865. He and his brother Edwin survived to go home to Louisiana and Sallie, the girl he loved and married in June of that year. I found a copy of their marriage license at the courthouse in St. Francisville. Manfred's days are recorded in letters to Sallie and in things he wrote about those months of his life.

While researching family history, I came across some other fascinating facts about them and about the times in which they lived. All through the south homes were destroyed and families torn apart. Many people in the South referred to that time as the War of Northern Aggression. No matter what we call it, it happened and is a part of the history of this nation and can’t be denied.

One of the most interesting events of the war happened in my great-grandfather’s hometown of Bayou Sara and St. Francisville just up the hill from the river. A battle raged at Port Hudson twelve miles south of Bayou

Sara and St. Francisville. Port Hudson was a major Confederate fort to protect the Mississippi River.  I'm standing by one of the cannons Port Hudson used to fire at the ship on the river.

In March of 1863, a Federal warship, the U.S.S Albatross sat in the Mississippi River at the port of Bayou Sara. Its captain, Lt. Commander John E. Hart ordered guns to assail St. Francisville with a church as a target. The church sat high on a hill, quite visible to the ship which rained down shells on Grace Episcopal Church, a beautiful Gothic structure that was the church of my ancestors. The rector there is said to have run down the hill to the river waving a white flag and yelling for them to stop shelling his church.

On June 12, 1863 the guns fell silent, and the church elders breathed a sigh of relief. Maybe the siege was over. However, something even more dramatic was taking place. Lt. Commander Hart lay gravely ill with a high fever and before his crew could stop him, took his own life. Hart was a Mason, as were several others aboard the ship. A boat with a group of men was launched with a white flag of truce.

The messenger aboard the boat asked permission to bury the captain in the cemetery of Grace Church, the same one they had used as a target. Although the ship’s crew didn’t know it, St. Francisville was the home to the oldest Masonic Lodge in Louisiana. The Senior Warden of the Lodge No. 31, Captain W.W. Leake was also captain of Company C, 1st Louisiana Cavalry, one of the units harassing the Federal army.

The rector at Grace summoned Captain Leake who met with the Union Officers. Upon learning that Hart was a fellow Mason, Leake arranged to have the funeral services and burial at Grace Church.
His body, accompanied by an honor guard of U.S. Marines and a delegation of Navy officers and sailors, was carried up the steep hill to the church. With Leake and other local Masons participating, they buried Hart with full Masonic honors. A brief moment of peace and fellowship happened during the bloodiest war in America’s history and become known as “The Day the War Stopped.” It is still remembered each year in St. Francisville.

As my great-grandmother Sallie asked her mother, “If they stopped the fighting for
one day, why couldn’t they just quit then? Why do men have to fight about everything?” 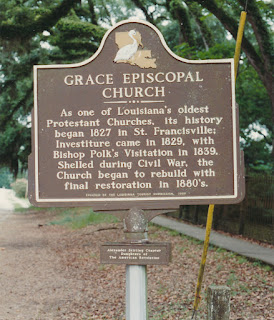 My cousins and I visited Grace Church in St. Francisville in June of 2005 in remembrance of our great-grandparents 150th wedding anniversary. We walked through the cemetery to find our ancestors’ graves. Here I'm standing beside my great-great-grandmother's grave. She is the mother of my hero in LOVE STAYS TRUE. We also saw the memorial erected for Lt. Commander Hart. The church hasn’t changed much, but it took years to repair the damage to the building that had been completed in 1860. Those repairs are still visible today on the side of the church.


Have you done any research into your family history? I found it to be most interesting and a lot of fun. If you're not careful, it can be addictive.

I'm giving away a copy of Love Stays True to one lucky person today, so leave your comment and be in the drawing for the book released this month.

In April, 1865, the day following the surrender at Appomattox, Manfred McDaniel Whiteman and his brother Edward are released from in an exchange of prisoners. They are given a few provisions before they begin a long journey by foot to their home in Bayou Sara, Louisiana.
At home, Sallie Dyer is waiting word of her beloved Manfred. Though just a young girl when Manfred left, Sallie has grown into a caring you woman who is determined to wait for her love—despite her father’s worries that she is wasting her life on someone who may never come home.

On their journey, Manfred and his brother encounter storms, thieves, and destruction, and are even thrown in jail in one town. Sallie carries a heavy burden of guilt and fears Manfred will reject her when he learns what she has done. Will these two young lovers be able to reunite despite all obstacles?

Martha Rogers is a free-lance writer and the author of the Winds Across the Prairie series as well as the novella, Key to Her Heart in River Walk Christmas. Her second series, Seasons of the Heart, is now available as is her Christmas novel, Christmas at Holly Hill. She was named Writer of the Year at the Texas Christian Writers Conference in 2009 and is a member of ACFW and writes the weekly Verse of the Week for the ACFW Loop. She is a retired teacher and lives in Houston with her husband, Rex where they enjoy spending time with their grandchildren and attending football, baseball, and rugby games when one of the grandchildren is playing or performing.
Posted by Martha W. Rogers at 1:00 AM