The Miraculous Defeat of the British at Fort McHenry and a Book Giveaway!

AND THE WINNER IS KAYM!!!!!  Congratulations to Kay! And thank you all for entering!!!


I had the privilege of traveling to Baltimore, Maryland while doing research for my series, Surrender to Destiny, a romantic War of 1812 trilogy set in that fair city. Having already read so much about it, I walked around the port district in complete awe, imagining my characters walking 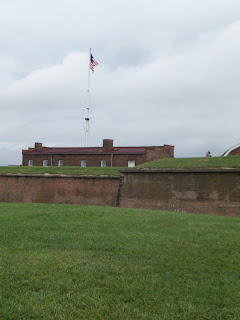 down those same cobblestone streets! For those of you who don't know much about this war, believe me, it's fascinating. In particular, the miracles that occurred over and over again. Against all odds, this fledgling American nation with a ragtag army and barely a navy defeated the most powerful military and navy forces of the day and sent them running for home! Only God could preform such a feat.

Another miracle occurred while I was in Baltimore. It so happened that on the EXACT day I was there, they were having a War of 1812 reenactment at Fort McHenry. This was not planned. I had no idea it was happening until I got there!  Cool huh?  Here are some pictures I took and if you don't know what happened that night, here's a summary of how this tiny fort, along with Baltimore's militia, defeated the British troops on land and sea and sent them packing for home. 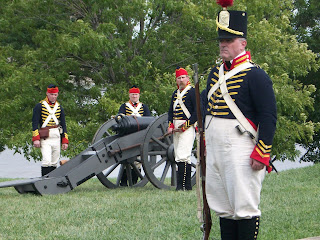 At noon on September 11, 1814, the British fleet sailed to the mouth of the Patapsco River and anchored off North Point, just fourteen miles from Baltimore. Arrogantly spurred on by their successful march into Washington DC three weeks earlier, the British planned to attack the “Nest of Pirates,” as they called the city, from both land and sea. Early in the morning on September 13, while British troops advanced on land from North Point toward Baltimore, five bomb ships and several other war ships maneuvered into a semi-circle two miles from Fort McHenry. Just after dawn, the bombing commenced.
Major Armistead, commander of the fort, would later estimate that in the next twenty-five hours, the British would hurl between 1500 and 1800 exploding shells at them. A few never hit their mark, but most exploded directly over the fort, showering destruction on the defenders. One bomb exploded on the southwest bastion, destroying a twenty-four-pounder, killing Lieutenant Levi Claggett, and wounding several men. Soon after, another shell crashed through the roof of the gunpowder 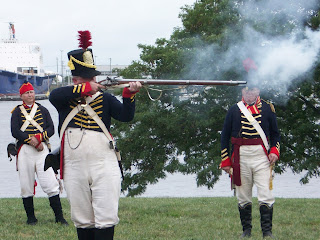 magazine. By the grace of God, it did not ignite. Major Armistead soon ordered the barrels of powder removed and stored elsewhere.

While the British land invasion was failing due to the courage and preparation of Baltimore’s militia, the bombardment of Fort McHenry continued throughout the long night. Finally at 7:00 a.m. on September 14, the shelling ceased, and the British fleet withdrew. Major Armistead immediately brought down the dripping storm flag that flew over the fort and hoisted in its place the forty-two by thirty foot flag sewn by Mary Pickersgill, the action accompanied by the fort’s band playing Yankee Doodle.
Eight miles away, aboard an American truce ship, Sir Francis Scott Key, overcome with emotion 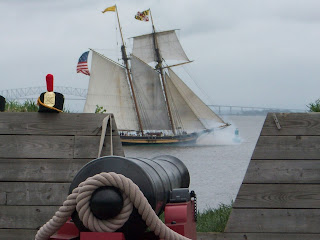 at the sight of the flag, penned what would become our national anthem, The Star-Spangled Banner Miraculously, Baltimore successfully defended itself against an attack by the greatest military and naval power on earth. The humiliating defeat suffered by the British changed the course of the war, and three months later, on Christmas eve, Britain made peace with the United States at Ghent. In Baltimore, the Niles Weekly Register announced the news with the headline: “Long live the Republic! All hail! Last asylum of oppressed humanity!”

May it ever be so!

Oh! thus be it ever, when freemen shall stand
Between their loved home and the war's desolation!
Blest with victory and peace, may the heav'n rescued land
Praise the Power that hath made and preserved us a nation.
Then conquer we must, when our cause it is just,
And this be our motto: "In God is our trust."
And the star-spangled banner in triumph shall wave
O'er the land of the free and the home of the brave! 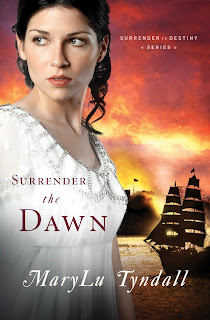 I'm GIVING AWAY a copy of SURRENDER THE DAWN,  the last book in my Surrender to Destiny Trilogy, aromantic adventurous tale of privateers that ends with the victory at Fort McHenry. To enter, please leave a comment with your email address.
Posted by MaryLu Tyndall at 12:30 AM