This is Boler’s Inn located in . This picture is the earliest known picture of the inn which was a stagecoach relay station in in the 1840s through the turn of the century. The stagecoach route ran from , to .

In 1834 Wesley Boler received the Land Patent for the land on which the inn is built.

The Choctaw Indians called the area Chanki. White settlers say Chunky. Many streams flow through the area into the Chunky Creek that flows into about 40 miles from my home town.

Surveyed in 1832-1833, the old wagon road eventually became known and the to , or simply the “”. It would become a and major road west during those early days of westward expansion.

Notable guests during Boler Inn’s heyday were Jefferson Davis and Stonewall Jackson. As could be expected with a building (and an inn at that) over 150 years old, numerous stories, fact mixed with fiction, abound. One of the most interesting is that General William T. Sherman’s wounded payroll clerk buried the Union Army’s payroll there on February 21, 1864 when quartered his troops in overnight. In addition, local legend has it that didn’t burn on his march through the South because of its name.

General Sherman burned the courthouse on his march to , so few records of the
time period survive. There is no solid proof what year the existing building was constructed. Some historians point to 1845, while others lean toward 1856.

And as is also the case with such a grand old lady, Boler’s has fulfilled many roles throughout her lifetime: inn, stagecoach and mail stop, newspaper office, private home to inventor F. C. Bradley, and the place where many young ladies took piano lessons from Mrs. Myrtle Stribling in the first half of last century.

This picture is what I remember of Boler’s Inn during most of my life growing up in and around . I have traveled past this building thousands (literally!) of times, and yes, I knew part of the history, but until one starts looking at what’s right before their eyes, it’s just another building, isn’t it?

Finally, I’m very happy to report that Boler’s is looking much better these days! In 1995, several citizens in Union banded together and formed the Foundation for the Restoration and Preservation of Boler’s . The State of has come alongside the foundation, and the restoration is still underway. 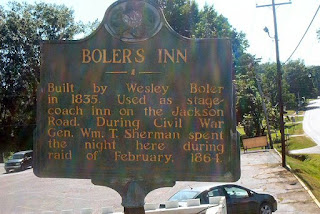 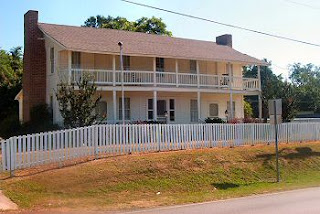 Tell us about a historic location in your home town
for a chance to win an eCopy of Claiming Mariah (Kindle or Nook).
Please include email address and specify if you would like to be in the drawing.
Winner will be posted in the comments on this blog post
no later than June 18th and in the sidebar.

Pam Hillman was born and raised on a dairy farm in  and spent her teenage years perched on the seat of a tractor raking hay. In those days, her daddy couldn’t afford two cab tractors with air conditioning and a radio, so Pam drove the Allis Chalmers 110. Even when her daddy asked her if she wanted to bale hay, she told him she didn’t mind raking. Raking hay doesn’t take much thought so Pam spent her time working on her tan and making up stories in her head. Now, that’s the kind of life every girl should dream of! Claiming Mariah is her second novel. www.pamhillman.com