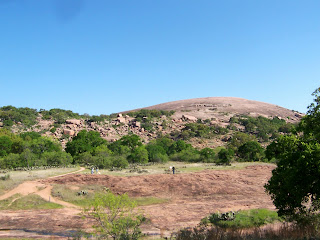 Laurie Kingery here, and for my blog this month I'd like to tell you about a magical place in my favorite part of Texas, the Hill Country. Enchanted Rock, an enormous dome of pink granite in the basin of the Llano Uplift, lies fifteen miles north of Fredericksburg at 16710 Ranch Road 965. The Enchanted Rock State Natural Area lies on the border between Gillespie and Llano Counties, and covers 645 acres. It was designated a Recorded Texas Historic Landmark in 1936. 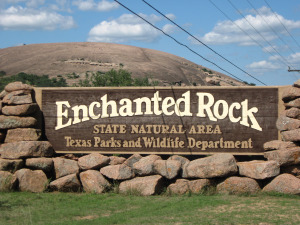 Why is it magical? Legends of the Comanche, Apache and Tonkawa tribes in this part of Texas assigned spiritual powers to this rock, which they believed was a portal to other worlds. The Tonkawa tribe believed that ghost fires flickered at the top of the dome, and that the creaking and groaning noises they heard at night was caused by spirits. Another legend says the rock is haunted by an Indian princess who threw herself off the rock after witnessing the slaughter of her people. It's said that bad fortune and death will befall any who climb the rock with bad intent. There are supposedly footprints imprinted in the stone that belong to an Indian chief who sacrificed his daughter there, and was condemned to walk on Enchanted Rock into eternity. 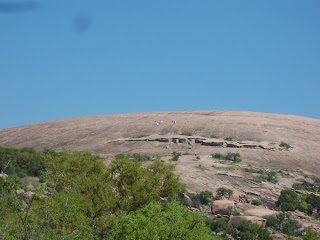 Geologists explain that the sounds are actually the contraction of the stones after their heating during the day. The rock has also been called "Crying Rock" and "Spirit Song Rock." The first European to visit it was probably Spanish explorer Alvar Nuñez Cabeza de Vaca in 1536.
Indians hid from settlers on top of this rock, unseen by the settlers below. In 1841, from its summit, famous Texas Ranger Captain John C. Hayes fought a battle against Comanches who had cut him off from his company, and repulsed them, inflicting heavy losses against the Indians. 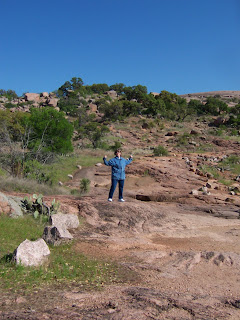 I climbed to the top of the dome with my husband on our honeymoon in 2005. It is about 425 feet to the top by a steep, winding trail, so no scary climbing gear or danger was involved, but I doubt I could do it now! :) The view was amazing from atop the windy dome, as the picture demonstrates. 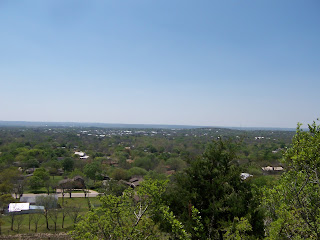 One can camp on the grounds, but we didn't, being too busy filling ourselves with good German food in nearby Fredericksburg! I'd like to say I will camp there another time--but probably not. I'm into my comforts, which doesn't include primitive camping in an area populated by snakes, bats and other wild creatures. J But I would've liked to hear the singing of Enchanted Rock at night… 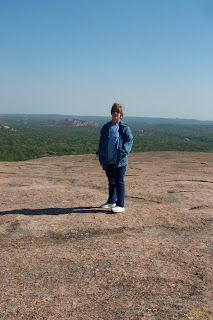