Hi! Darlene Franklin here. As a child, I enjoyed visiting Fort Western in my home of Augusta, Maine. It enjoys prominence as the "oldest surviving wooden fort" in the United States. It also has a certain notoriety as the staging point for Benedict Arnold's invasion of Canada at the beginning of the Revolutionary War.

I went back to Benedict Arnold in searching for inspiration this month. From what I've read, he was a spirited, rambunctious young man, little suited to a disciplined life style. He finally stumbled upon his occupation as an apothecary (his sister was his partner in the business.  That would make a grand story! A female pharmacist in Colonial times. Hmm . . .)

In spite of his lack of respect for the chain of command, especially under men who were promoted over him, Arnold was an able officer. Massachusetts commissioned him to attack Fort Ticonderoga on Lake Champlain.

Unfortunately for Arnold, Ethan Allen and his Green Mountain Boys received the same commission from Connecticut (Vermont was "New Connecticut" at one point in its history).  Allen claimed the victory of the battle and Easton was made commander of the fort.

Arnold kept pushing for opportunities to prove himself. George Washington respected him, and gave him the task of invading Canada. The troops got a late start in the season, and anyone who has lived in Maine knows how cold it can be during the winter. He kept his men together in spite of the harsh conditions, a feat that rivaled Washington's impact at Valley Forge. But his best efforts couldn't fight desertion, smallpox, and end of subscriptions for the soldiers. His letter requesting reinforcements reached the British instead. Left with a fighting force of only 600 men, he was praised for showing to the fight. They didn't win.

Arnold received a bullet to the leg during the battle of Quebec. He continued to serve, and a later victory against Burgoyne helped to convince France to come to America's aid.

What brought about his ultimate downfall was a woman. He married a wealthy heiress and attempted to maintain her in the lifestyle she was accustomed to. If that meant cheating the Continental Congress out of a few dollars. . .

And Arnold attempted to hand it over to British, earning the name of traitor. 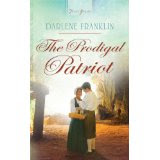 This month my story of Revolutionary Vermont, Prodigal Patriot, is on sale for $.99 in ebook format from Amazon and other outlets.  It covers the second battle at Ft. Ticonderoga.

GIVEAWAY: I will give one copy of Hidden Dreams, the fourth book about Maple Notch (Prodigal Patriot is book #1) for every 10 comments left today. Winners will be chosen on Sunday, June 16th.
Posted by Darlene Franklin at 12:30 AM