Hi.  Winnie Griggs here.
I recently had a need to figure out what sort of schoolyard games children in a very rural small town in 1896 might have indulged in.  And I thought I'd share some of my findings with you.
One of the things that surprised me while I was researching the topic of recess is that in some schools there were not restrictions as far as where the children could wander off to, they could mosey into adjoining rural areas or farmlands, so long as they could hear the bell when it rang and return to class on time.

As for the games they would have played, it seems that most of them would be familiar to today's children - at least those who do actively play games still.  Games like Tag, Hide-and-seek, Hopscotch, London Bridge, Duck-duck-goose and Follow the leader.  Marbles and jacks were popular for those who had access to the materials required.  And if they had access to a ball and bat - or were crafty enough to be able to fashion one - they might have played baseball.

During inclement weather, when they were forced to stay inside during recess, they might have indulged in a game of I Spy or Blindman's Bluff.  Or perhaps Charades or Jackstraws (what we call pick up sticks).

Then there were word games which tested participants' memories, like I Packed My Suitcase, where participants list things they packed in their suitcase in consecutive letters of the alphabet.  The first person might say "I packed my suitcase and in it I place an apple."  The next person would have to remember what the first person said and add something that starts with a B such as "I packed my suitcase and in it I packed and apple and a balloon." And so on until someone forgets an item or adds something out of order.  I used to play this one with my own kids in the car on long trips and they really enjoyed it.

One game I had not heard of before was one called Throwing The Smile.  In it, the players form a circle with on person in the middle.  It is the job of that person to try to make everyone smile, by whatever means possible.  Anyone who smiles is out.  The last person standing wins.

So, as it turns out, I was able to draw on a lot of my own memories of recess as a little girl to write my schoolyard scene.

What about you?  Was there a favorite game you remember playing during recess?

And since it is still June, I'm going to give one of the commenters on today's post a copy of my June release The Bride Next Door. 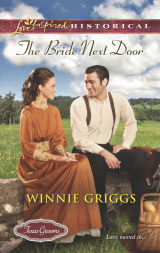