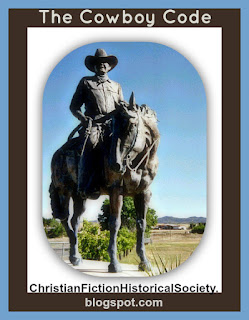 This post is brought to you by Janalyn Voigt. Escape into worlds of beauty and danger.

Western writer Zane Grey first described a standard of morality in his 1934 novel The Code of the West, and in 1947 Gene Autry first identified what he called the Cowboy Code.

Cowboys did not hold any governing laws  with as much esteem as they did their own code. Anyone who broke faith with it could expect ostracism, ridicule, and punishment. A summary of the Code of the West includes the following items:

In many ways, the Code of the West parallels the code of chivalry adopted by medieval knights. That’s not surprising since the culture of the Wild West resembled feudalism. Adherence to the code was voluntary but seldom overlooked. In her auto-biographical book, No Life For A Lady, Agnes Morley Cleaveland describes an incident when as a young girl traveling home after dark she met an outlaw on the run. The man, who sat on a winded horse, greeted her mildly and let her pass without incident. He paid the ultimate cost for his unwillingness to frighten a young girl. If he’d taken her horse he might have escaped to Mexico. By dawn a bullet had ended his life.

Ghost Town Memories: Where the West was Wildest
The Medieval Code of Chivalry
The Writing Life of Janalyn Voigt (Or a Tale of Two Genres)