Cooking in the Old South

Up until I began taking home economics classes in eighth grade, I thought everybody around the country ate the same things my family did in Texas. Red beans, cornbread, chicken fried steak, fried chicken, barbecue pork, black-eye peas and turnip greens were our standard fare for supper or Sunday dinner along with grits, biscuits, and flapjacks for breakfast.

That year I learned about different foods from all over the country, and more about foods from different cultures. I did know some about German because my grandmother cooked Sauerkraut and a German Fruit Cake for my grandfather, but I never thought much about them except that I hated the Sauerkraut, especially since she made it from scratch.

The discoveries in those cooking classes led me to major in Home Economics at Baylor in the ‘50’s. There I found all kinds of good foods from all over the world. Research for my historical novels also led me to some interesting finds.

Because my newest release is set in the days of plantations and southern living, I did quite a bit of research into foods of that time. Southern cooking, like Southern hospitality has become a legend that is partly truth and partly myth. Not every plantation had good cooks and not all plantation owners were hospitable hosts. Still, every region from Maryland to Louisiana has a rich tradition of culinary lore. 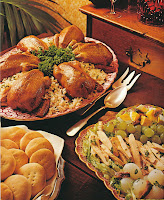 Corn and pork were staples of the diet. Ham was a favorite, smoked right on the premises. Chicken was another favorite and used in everything from main dishes to salads.
This picture depicts a mid-day dinner of chicken with oyster/giblet dressing, beaten biscuits, and Salmagundi.
3 cups cooked chicken in strips    1/4 cup white vinegar

During the war, foods became scarce as supplies were limited to what they had on hand. Cooks had to improvise in order to satisfy the appetites of the family. Sometimes they would even boil the dirt from smokehouses to get the salt, and they made soda from burnt corncobs. Sweet potatoes were easily grown and used in all sorts of ways from vegetable side dishes to desserts that birthed Sweet Potato Pie. 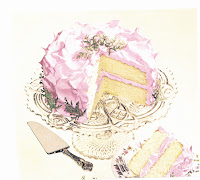 This Rose Geranium Cake came about as a result of the shortage of various flavorings and seasonings. Rose geranium leaves were used as a replacement for more common flavorings such as vanilla or almond.

'
Remember everything cooked started with natural ingredients, many times women were in the kitchen most of the day preparing the foods for the meals to be served. In many cases, eggs had to be gathered and cows milked before breakfast, and a trip to the smokehouse was in order if they wanted smoked meat for a meal. No quick trips to the grocery store for forgotten items unless you lived in town with a good general store close by.

Do you have any recipes handed down in your family? If so, share them with us. I'm compiling a list of all my grandmother's recipes to give to my cousins.

Love Stays True takes place immediately after the Armistice in 1865. It is the story of Manfred's journey from Pt. Lookout, Maryland and a prison camp to Louisiana. While he traveled, Sallie waited for him and endured some painful experiences that molded her into the woman who would become a doctor's wife and travel to Texas to help him set up practice.

Martha started late in life but now has multiple novels and novellas in print. She lives in Houston, Texas with her husband and is active in their church where she sings in the choir and teaches a class on Sundays and he serves as a deacon. She is a member of ACFW, The Woodlands Chapter of ACFW: WOTS and IWA! She is a regular member of the faculty for the Texas Christian Writers Conference held in Houston each August.


Leave your comment for a chance to win a copy of this book. Don't forget to leave your email address and answer the question above. The winner will be announced on this blog on July 12. Thanks for dropping by.
Posted by Martha W. Rogers at 1:00 AM