As we continue our series on the Harvey Girls, the Women Who Tamed the West as waitresses along the Atchison, Topeka and the Santa Fe railroad, what better way to get an inside peek at their lives, then to look at their jobs. Harvey's first waiters were men. After getting into a brawl one night and serving customers with cuts and bruises, Fred Harvey decided he needed a more gentile workforce. The female waitress was born! Men were relegated to the tasks of cooks and busboys. Fred Harvey, the enterprising man of vision, expected and demanded perfection. The finest service, the best linens and silverware, the loveliest smiles, and a top of the line menu that left customers forgetting they were eating at a railroad stop. Harvey wanted the best and wouldn't stop at anything to achieve it. Here is a menu from a Chicago Harvey House in 1945. 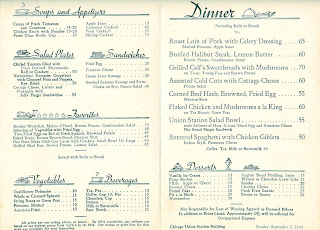 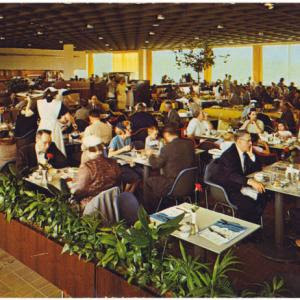 Once a girl was employed as a Harvey waitress, her uniform became hers, although it was washed and ironed on location. Once the uniform began to show wear, Harvey replaced it for her, even going as far as to reimburse her for the uniform, depending on signs of wear, at the end of her contract. Nothing but the best! But let's not romanticize the lifestyle too much. While Fred Harvey may have been a fair man, he didn't stand for foolishness or laziness. Harvey waitresses, cooks, and managers worked hard. Often ten to twelve hours a day only to collapse into their dormitory style rooms and start all over again the next day. Yet the women seemed content. They were supporting themselves in a profession that was rapidly gaining approval. Many say if not for Fred Harvey's vision, we wouldn't have female waitresses. 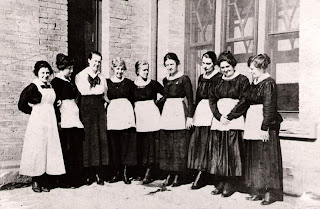 As I continue to research these amazing women, I am constantly astounded at their strength. Long hours left little time for socializing or courting, yet these women married and continued to forge westward, providing the western men with upstanding wives who could work as hard as they did.

Cynthia Hickey is the author of Cooking Up Love, the first book in the Finding Love the Harvey Girl way. Look for the second book in the series in March 2014. www.cynthiahickey.com
Posted by Unknown at 3:00 AM