Historical Societies and Fiction Authors: A Match Made in History

Recently, I gave a speech at my local historical and genealogical society, and I wanted to tie in the important relationship between historical societies and authors who write fiction. So I asked several of my writer friends to share an obscure, unusual, or little known historical tidbit they stumbled upon accidentally and used in one of their books.

So let’s get started…

Author Anne Mateer writes for Bethany House. Anne wanted to set a novel close to where her husband grew up in central . She began her research online and found the website for the Huntingdon County Historical Society. There she learned about a Home for Orphan and Friendless Children that existed in Huntingdon from the late 1800s into the 1920s. The home for orphans started from a revival on the college campus in town. But she couldn't find much of anything else. She planned a trip to Huntingdon to promote her first published novel and decided to leave enough time to research on site.

When Anne arrived at the historical society, no one knew any more information about the Home, but once she explained the reason for her visit, the director offered to call a woman who had written several books on history. The woman--Nancy Shedd-- agreed to meet Anne. Turns out she had long had a fascination with the Home and looked for records and other historical documents but hadn't found much, and hadn't tried again in several years. Her interest was personal--her grandmother was the first matron of the home! 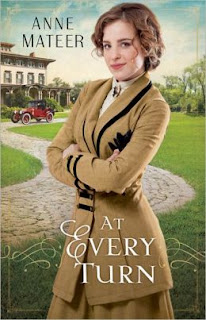 Because of Anne’s request, and knowing her time in town was only a couple more days, made some phone calls and dug around. When she called Anne again, it was with news that a box of documents had been found in the storage archives of the college! The two women spent several hours sorting through them, reading much of the history of the Home and its residents. The next day--the last day before Anne left, found her again. She had discovered two of the ledgers of the Home in the basement storage of the courthouse! Again, amazing stuff, especially regarding the children who lived in the Home, the circumstances that put them there, and for a few, what happened to them when they left! Records lost for many years come to light after Anne’s request.

While researching online, Anne also became fascinated with auto racing in the years just preceding WWI. She wanted to build a story around this, but information about auto racing in this era was not easy to come by. She was finally able to take a trip to the . While there, she
took pictures of old race cars and asked questions of the docents.

One of the docents introduced her to a gentlemen he felt sure could answer her questions. This man patiently answered her questions about how the cars worked, then telling her stories he remembered from his grandfather ….. who was the mechanic for the car that won the 1922 Indianapolis Motor Speedway! His technical knowledge as well his anecdotes brought realism to her story.

Without his willingness to share his knowledge and his stories, not only would her book have been poorer, but much of what he told her might have been lost to future generations.

Anne concluded her email to me with these words, “I wouldn't try to write a book without consulting the people who have lived, worked, and studied the place and time in which I desire to write!” 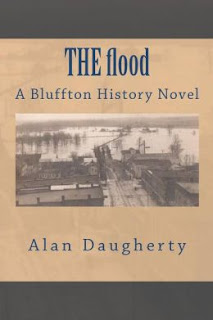 Alan Daugherty from NE Indiana is a and Bluffton history lover who once served on the local historical society board. Using the historical society archives, he researched and fictionalized the 1913 flood that occurred 100 years ago this past March.

He read local newspaper documentation via the library’s film reference.

Many little stories were hidden in the newspaper reports, as well as individual family folklore accounts. Old postcard photo scenes were included in B/W. In his research, he discovered that many Bluffton dentist offices were broken into during the flood and dental gold stolen. Of course he included that in the story, enhancing his fictional plot, and making it more believable.

Alan added that just recently he was reading local newspapers of 1886 and found a story of his great-great uncle being arrested as a young man for stealing, cooking, and eating a turkey. He’s relieved to know that as far as he knows, he doesn’t have a horse thief in the family….but he does have a turkey thief.

Celia Hayes says, “Pam, I can't tell you how often I’ve used incidents and people in my books whom I have found out about through researching local history.” 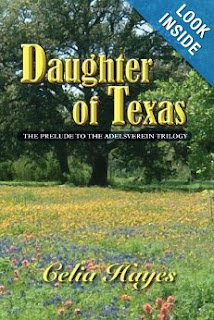 Her books set in the Texas Hill Country used just about every archived account of German settlers from the area - and she also enjoys speaking before her historical associations and for Civil War buffs, also.

Celia wrote a fictionalized account of the Gonzales men who participated in the Come and Take It Fight, and in response to Col. Travis's plea for reinforcements. She depended on research by a local Gonzales historian who had gone back into various state archives to work up short biographies of the men from Gonzales. The biographies were invaluable to Celia, because they had all kinds of details - what the men had done for a living, where they had come from before settling in , and the names of their wives and children. Much of her fictionalized account of these events is set in Gonzales, so it was all pure gold for her.
those who had gone to the

Celia concluded with this. “And then there was the time that I had to know how to clean and load an 1836 Colt Paterson revolver. A collector put me in touch with a reenactor who had a replica pair. Got a lesson from him - exactly what I needed.” 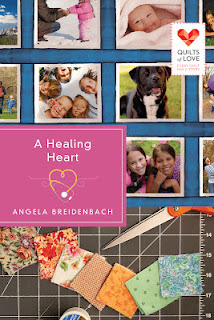 My friend Angela Breidenbach is from , shared a touching story about research that bridged generations and continents. She discovered the history of Japanese people lost to their families because they moved to at the mining boom in the early 1900s. Many were never heard from again and when families in  tried to find them, they were officially listed as buried in , , but the graves are located in .

100 years later, someone in did grave stone etchings and sent them to to be analyzed. About 12 years ago, those stone etchings were translated. Quite a few Japanese families have found their missing family members in the . Many were turn of the century through the 1930s.

I don’t have space to share all their stories, since my speech was forty-five minutes long, but I want to thank the following authors for sharing their historical finds with me: Carrie Stuart Parks, Susan Page Davis, Cara Putman, Darlene Franklin, Kathleen Y’Barbo, Myra Johnson, and Patty Hall.


Next month on the 16th, we’ll get to hear from some interesting historical moments from these ladies as well. Writers and readers alike, please feel free to tell us something that really caught your attention when you visited a museum or a historical society. 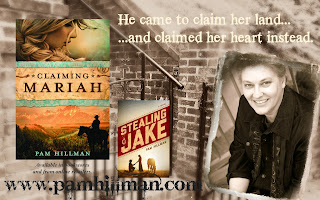 Pam Hillman was born and raised on a dairy farm in and spent her teenage years perched on the seat of a tractor raking hay. In those days, her daddy couldn’t afford two cab tractors with air conditioning and a radio, so Pam drove the Allis Chalmers 110. Even when her daddy asked her if she wanted to bale hay, she told him she didn’t mind raking. Raking hay doesn’t take much thought so Pam spent her time working on her tan and making up stories in her head. Now, that’s the kind of life every girl should dream of! www.pamhillman.com
Posted by Pam Hillman at 12:30 AM