A recent study by Anytime Fitness showed that more than 70 percent of Americans would rather go to the dentist, do taxes or sit in the middle seat of an airplane than go shopping for a swimsuit.  Agree or disagree?

I just got back from Laguna Beach, California, which explains why bathing suits are very much on my mind this week.

Young and the not-so-young alike wore the teeniest, tiniest of bikinis everywhere, even in restaurants and on trams.  As a mother, I was tempted to pull my husband’s shirt off on several occasions and wrap it around some scantily-clad teen whose bikini string threatened to pop.

Fortunately, I contained myself, but one thing is clear; Nothing documents the mores of the times as much as bathing suits. 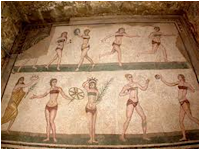 Two French designers get credit for inventing the bikini in 1946, but women wore bikini-like costumes for sports and public bathing as early as 1400 BC.  After the fall of the Roman Empire, the church came into power and public bathing disappeared. 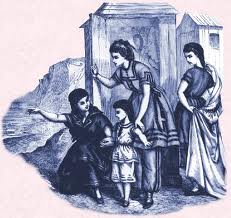 Two things happened during the Victorian age that was to have an impact on fashion; Railroads made the seashore a popular destination and women began participating in croquet, golf, bowling, tennis and other sports.The most controversial sport was swimming. Considered good for health, swimming also found favor for not causing women to do something as unfeminine as (gasp) sweat. But modesty and white skin took precedence over comfort and even safety.  Any effort to make swimwear more suitable to the sport was met with opposition.

As a result, feminine bathing suits were typically black and long-sleeved wool dresses were worn over bloomers.  Black stockings, lace-up bathing slippers and a ruffled cap completed the outfit.

Of course Victorians never left modesty to chance; for added protection weights were sewn into hems to prevent a skirt from floating up and revealing a feminine limb. 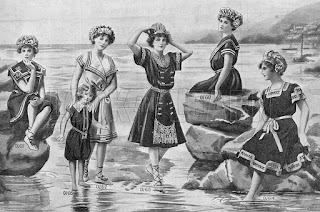 indecent exposure.  One woman in Coney Island was indeed arrested for merely wearing a bathing suit under her street wear.  Men didn’t fare much better.  In 1892 William B. Hemmenway of New York was arrested for swimming in a bathing suit that lacked sleeves. And, of course, strict rules forbade men and women swimming together as more than one hapless couple found out.

Since some bathing suits reportedly weighed as much as twenty-two pounds, ropes were attached to buoys to give “swimmers” something on which to hold.

Bathing machines became all the rage in the mid 1800s.  Invented by a Quaker in 1753, bathing machines contained a “modesty tunnel.” These little cabanas would be drawn into the water by horses and allow a female swimmer to emerge from the water in her dripping flannel or wool dress in complete privacy.

This all changed in 1907 when the first woman to swim the English Channel, Annette Kellermen was arrested in Boston for wearing a one-piece form-fitting bathing suit. Considered scandalous at the time, her bathing suit helped pave the way for bigger and…uh…smaller things to come.

I’m happy to report that the teeny-tiny bikinis weren’t the only ones creating a sensation in Laguna Beach last week; my “Mother Teresa” approved swimming suit got its share of attention. If only the looks of disbelief weren’t accompanied by shaking heads.  It’s a good thing I left my hem weights at home.

Today I'm giving away a copy of A Bride for All Seasons Collection, featuring Mary Connealy, Robin Lee Hatcher, Debra Clopton and me! So if you have an opinion on bathing suits, good, bad or indifferent, now's the time to speak up!