Hi!  Winnie Griggs here.  In my upcoming October release, A Family For Christmas, the heroine Eve runs a confectionery shop.  As part of the research for this book, I looked into what sorts of treats might be sold in such an establishment in 1896, the time period this story is set in.  Today, I thought it would be fun to share a bit of this info with you.  (Oh, and you'll also find information about a giveaway I'm sponsoring today at the bottom of this post)

When I looked into the items you’d find in a small town confectionery during this period, I was surprised by some of the things I did - and didn't - see.

Some of the expected items on the list were butterscotch, peppermints, lemon drops and sugar plums.  Marshmallows, gum drops and sour drops were a few of the things on the list that I didn’t expect to see - I hadn’t realized they’d been around that long ago.  Another surprise -  popcorn was classified as a candy during that period.  One thing conspicuously absent from the lists were references to any sort of chocolate candies.  Apparently, even though chocolate WAS around at this time, it hadn’t made into everyday use as a children’s treat.

Most of the candies offered by a general store would be hard candies such as peppermint sticks, butterscotch, lemon drops, hoarhound candy or rock candy.  I decided I’d prefer my heroine, however, to concentrate on softer treats such as bon-bons, taffies, nougats, gum drops and fudge.  She also makes brittles and pralines.  It was great fun coming up with a list of offerings for her shop!

One thing I learned in my research is that fudge is an American invention.  The exact origins are a matter of some dispute, but the first mention of it is found in a letter written by a student at Vasser College, Emelyn Hartridge.  In the letter dated 1886 Emelyn mentions that the relative of a schoolmate made the confection and sold it for forty cents a pound.  Emelyn obtained the recipe and made about 30 pounds of the sweet treat for a school fundraiser.  It was a huge success and a tradition was born. 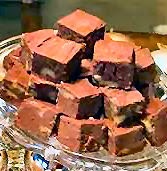 If you’d like to get a look at some of the early recipes, you can check them out at this link:
http://www.thenibble.com/reviews/main/candy/old/history-of-fudge2.asp

In addition, I thought I’d share a much more modern version, namely my personal favorite.  This is made the old fashioned way so it takes a bit of time and attention, but whenever I make it, I think of making it with my mom and sister back when I was just a kid - that always adds to my enjoyment of the treat.
Here it is:

So tell me, what is your favorite confection?

And to celebrate the October release of my book A Family For Christmas, I’d like to give one of today’s commenter an advanced copy of the book. 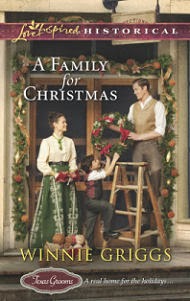 An Unexpected Gift
Eve Pickering knows what it's like to be judged for your past. So she's not about to leave the orphaned boy she's befriended alone in this unfamiliar town. Since Chance Dawson's offer of shelter is the only way to look after Leo, Eve is determined they'll have a warm, welcoming home for the holidays.

Chance came from the big city to make it on his own despite a painful secret. But Eve's strength is giving him a confidence he never expected—and a new direction for his dream. With a little Christmas blessing, he'll dare to win her heart—and make their family one for a lifetime.
Posted by Winnie Griggs at 12:30 AM