The History of the Gun

The history of the gun tells the story of America. At its most fundamental, the history of the gun is the history of freedom. And it illustrates why freedom is a thirst within each man and woman's soul. Being set free unleashes the best in all of us. The story of freedom isn't reflected by the gun itself, but by the ingenuity behind it, the wealth to be made through it. This is why being allowed to work for our own best interests makes a better world for everyone.

I’m going to hit some of the highlights of the progress made with guns in today’s blog post.

1364: First recorded use of a firearm - shooter lit wicks by hand that ignited gunpowder that was loaded into the gun barrel. Contrary to popular belief, the Chinese did not use gunpowder only for fireworks. In fact, the earliest surviving recipes for gunpowder can be found in the Chinese military treatise of 1044 AD, which contains three: two for use in incendiary bombs to be thrown by siege engines and one intended as fuel for smoke bombs.

14th century China: The matchlock firearms were first mentioned. The matchlock appeared in Europe sometime in the mid-1400s, although the idea of the serpentine appears some 40 years previously in an Austrian manuscript. The first dated illustration of a matchlock mechanism dates to 1475, and by the 1500s they were universally used. The Matchlock secured a lighted wick in a moveable arm which, when the trigger was depressed, was brought down against the flash pan to ignite the powder. This allowed the musketeer to keep both hands on the gun, improving his aim drastically.

1630: Flintlock guns - the flintlock did two things mechanically, it opened the lid of the flash pan and provided an igniting spark. Flintlock is the general term for any firearm based on the flintlock mechanism. Introduced about 1630, the flintlock rapidly replaced earlier firearm-ignition technologies, such as the matchlock and wheellock mechanisms. It continued to be in common use for over two centuries, replaced by percussion cap

1825: Percussion-cap guns invented by Reverend John Forsyth - firing mechanism no longer uses flash pan, a tube lead straight into the gun barrel, the tupe had an exposive cap on it that exploded when struck The percussion cap, introduced around 1830, was the crucial invention that enabled muzzle-loading firearms to fire reliably in any weather.

The percussion cap system was made obsolete by: 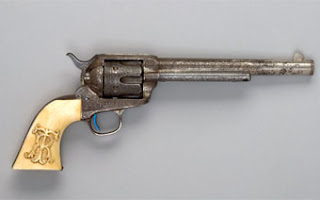 Before the Colt revolver only one and two-barrel flintlock pistols had been invented for hand held use. Colt revolvers were all based on cap-and-ball technology until the Smith and Wesson license on the bored-through cylinder (bought from Rollin White) expired around 1869. "Abe Lincoln may have freed all men, but Sam Colt made them equal."

I sometimes wonder if people today even know what Freedom truly is.

What does Freedom mean to you? Where is the balance between guns and safety and crime and Freedom?

Ben Franklin once said:
"Those who would give up Essential Liberty to purchase a little Temporary Safety,
deserve neither Liberty nor Safety."

I know this:
America is the land of the Free and the home of the brave. But if we don't start being a lot more brave we're going to be a lot less Free.

Fired Up, Book #2 Trouble in Texas Series, Dare Riker is a doctor who saves lives, but someone seems determined to end his. It may have something to do with the traitors he dealt with during the Civil War, or it might be related to the recent incident with Flint Greer and the ranch. Whoever the culprit is, he or she seems really fired up, and Dare can't let his guard down for a moment, which is a challenge, since right now he's trying to win the heart of the recently widowed Glynna.

Glynna Greer came west as a mail-order bride and ended up in a bad situation. Now her husband, Flint, is dead, and she's determined to care for her son and daughter on her own. She wants to believe Dare Riker is as decent as he seems, but she's terrified to lock herself into another marriage. She plans to support her small family by opening a diner--never mind that cooking is not her greatest talent. The men in Broken Wheel, Texas, are so desperate for home cooking that they seem willing to overlook dried-out beef and blackened biscuits. Glynna can't help but notice that danger follows Dare wherever he goes. There's the avalanche. And then the fire. But things really get out of hand when someone plunges a knife from Glynna's diner into Dare's back. Are Flint's cronies still plotting revenge? Is Glynna's son engaged in a misguided attempt to protect his mother? Is a shadowy outsider still enraged over past injustices? And can Dare survive long enough to convince Glynna to take another chance on love?

Mary Connealy writes fun and lively "romantic comedy with cowboys" for the inspirational market. She is the author of Swept Away, her twenty-sixth book and also the bestselling Kincaid Brides, Lassoed in Texas, Montana Marriages, and Sophie's Daughters series, and she has been a finalist for a Rita and Christy Award and a two time winner of the Carol Award. She lives on a ranch in eastern Nebraska with her husband, Ivan, and has four grown daughters.

Posted by Vickie McDonough at 9:22 AM