Since I love cooking and taught home economics in high school for twenty years, I’ve always been fascinated by old kitchens and the appliances cooks used back in the 17th and 18th centuries. Since we all do some form of cooking whether by microwave or conventional stoves, I thought it would be interesting to look back at some of the antiques and to learn more about cooking in history.

After fire was discovered and foods were then cooked, the methods of cooking have evolved from cooking over the open fire to modern built in convection and microwave ovens. With all the new appliances to make it so much easier, we still find ourselves cooking over open flames from either gas or charcoal or even wood and call it “grilling” or “barbecue.”

The first cook stoves go back a lot further in history than I remembered from my days as a student of such history. The first cast iron stoves began in about 1728 and were of German design. 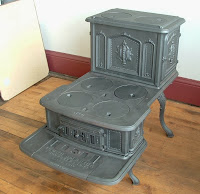 In 1740 Franklin improved the design and created what he called the “Pennsylvania Fireplace.” It was based on the original six-plate stove. By 1760, ten plates of cast iron were used. Four plates formed an oven and added two hinged doors. Smoke passed through the openings on either side and out a pipe.
By the 1820’s and through 1870, the most common stove was the “step” stove. The one pictured was used in that time frame. The circles on top were heated by the fire under them. You can see the “step” in front of the stove. 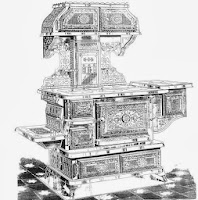 By 1890, a much more elaborate stove made its appearance, and by the turn of the century the stoves became much more convenient and added time to the cook’s busy schedule. Manufacturers began a search for new heat sources other than wood or coal. Gas became an alternative. However, gas was considered too expensive a fuel to be burned for cooking (not to mention the source of an after-taste in some minds). 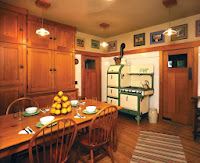 After 1900 electric power companies nibbled away at their major source of income, lighting, they turned to the kitchen and the cook stove for new market. Gas ranges had no need for the heavy, cast iron box of a wood- or coal-burning range, they could be built in much lighter and more compact forms. These new stoves were light enough to stand on slender legs to become, along with sinks, one of several pieces of freestanding furniture in the early modern kitchen.
(Photo: Douglas Kiester)
One of the iconic images of the 1920s kitchen is the special gas cabinet range with its distinctive barrel-door warming oven on top. They also were more colorful than the old black iron ranges. The one above is an antique stove from that era in a more modern kitchen setting.

By the Roaring Twenties, the cabinet range hit its stride as a five-burner, two-oven appliance with reliable heat regulators or thermostats to control oven temperatures.  Today, cooks enjoy either gas or electric ranges along with microwaves for instant cooking.

I don't cook as much as I once did with three growing boys, but I still much prefer my modern kitchen with a gas range top with a microwave above it and electric built-in ovens. How about you? What do you prefer for cooking?

Thanks to the Antique Stoves website for the pictures of the older stoves. Interesting information here about the history of cook stoves.
http://www.antiquestoves.com/images/new_adonis.jpg

Martha Rogers is a free-lance writer and was named Writer of the Year at the Texas Christian Writers Conference in 2009 and writes a weekly devotional for ACFW. Martha and her husband Rex live in Houston where they enjoy spending time with their grandchildren and attending football, baseball, and basketball games when one of the grandchildren is playing or performing. She is a member of several writing groups.  A former Home Economics teacher, Martha loves to cook and experimenting with recipes and loves scrapbooking when she has time. She has written two series as well as several other novels and novellas. The first book in her new series, Love Stays True, releases in May, 2013.