History of a Pit Bull 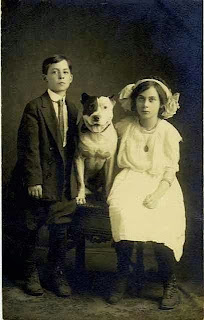 My extended family lived on the drug infested borders of Mexico and therefore, I was raised with a horrific aversion to anything pit bull. They were killers, reactive, and deadly to man. One of the weeks I visited there, a young child was killed by an aggressive attack from a pit bull and another a man lost his hand when they couldn't pry the jaws of the pit bull apart from its relentless bite.

Imagine my surprise, when I started researching the idea of the "nanny dog" for my next book and uncovered a plethora of pit bull loving ancestors who not only owned them as pets but entrusted them with the protection of their children! They were trained to love the children to the ultimate and became fierce protectors and companions to the little ones who snuggled and cuddled them on a daily basis.

And it wasn't just the wealthy who owned pit bull nanny dogs, but the poor over the wealthy often chose the pit bull as the wealthy tended toward the more "good looking" dog that would enhance the visual and not just protect.

Oddly enough, the pit bull nanny dog's opposite was the pit bull in the dog fighting ring. Trained in the late 1800's and early 1900's for the ring, pit bulls became some of the fiercest most bet upon dog in the outlawed sport. Solely trained to kill other dogs, these pit bulls were also non-human aggressive. Because of their ability to lock jaw and maintain such a violent death grip, trainers in the dog fighting arena were careful to build the trust and loyalty of the dog, while encouraging its hatred toward its own species.

Enter in abuse, starvation, and an overarching sense that all men-but-the-trainer are evil, and you 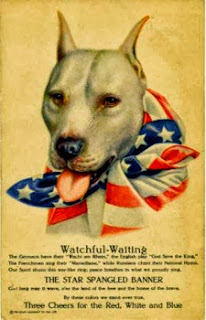 have the drug dog known by me as a child. The pit bull became man's enemy at the hand of man. I still run for my life when a drug-dog enters my cousin's yard. You never know when they're on the attack. Yet, when I visit my Admin Assistant's home, I'm barraged by the fierce loyal love of three engaging and slobbering pit bulls who only reinforce the Victorian age philosophy that no dog can love as much as a pit.

And let's not forget, the pit bull was the mascot of American war recruitment in both World Wars and were even known to be war heroes.

SO as my nanny-dog research continues, I hail the pit bull as a loving and vivacious family dog who, in more cases than not, became the best friends to many a 19th century child.

Jaime Wright - Writer of Historical Romance stained with suspense. Youth leader. Professional Coffee Drinker. Works in HR and specializes in sarcasm :)
Find me on Twitter
Find me on Facebook


Find me on Pinterest
Posted by Jaime Wright at 3:00 AM