Little Women by Louisa May Alcott was an early favorite of mine. I loved Jo and understood her angst about having to stay in the house and learn the womanly arts instead of being out of doors. When “Jo shook the blue army sock till the needles rattled like castanets, and her ball bounded across the room,” I was right there helping her scoop it up. I wondered if we would ever master the needles and yarn. 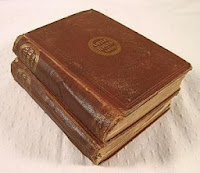 It was the first time I encountered knitting in fiction. Jo continued her knitting in Good Wives and Miss Alcott used knitting as a clever way to hide facial expressions and other reactions of her characters.

I learned to knit when I was in grade school. My mother showed me the pink booties her mother had knitted for me. It would be decades before I could knit with the precision and manipulation of double point needles needed for baby socks, but I racked up a lot of hats and scarves.

I began to watch for knitting and needlework references in fiction. A high school favorite, Nathaniel Hawthorne's The Scarlet Letter, had a character who knitted. Madame Defarge, an archetypal evil character in Charles Dickens' A Tale of Two Cities, used pattern stitches as a code to knit a list of the upper class doomed for the guillotine.

Who can forget Agatha Christie’s Miss Marple sitting in a corner knitting and eavesdropping? She carried her knitting as readily as she donned a sweater before an outing.

The very first description of Miss Marple in a 1928 Sketch magazine mentions her knitting: [She wore] a black brocade dress, very much pinched in round the waist. Mechlin lace was arranged in a cascade down the front of the bodice. She had on black lace mittens, and a black lace cap surmounted the piled-up masses of her snowy hair. She was knitting — something white and soft and fleecy. Her faded blue eyes, benignant and kindly, surveyed her nephew and her nephew's guests with gentle pleasure.

Many children know that the hero of Jessica Day George's Princess of the Midnight Ball is a knitter.

Clara Peggotty in Charles Dickens's 1850 novel David Copperfield is the housekeeper of the Copperfield home and plays a big part in David's upbringing. The name "peggotty" or a "knitting nancy" a knitting device, is thought to be a reference to Clara Peggotty's fondness for knitting.

Book One, Chapter 3: Mrs. Peggotty with the white apron, was knitting on the opposite side of the fire. Peggotty at her needlework was as much at home with St. Paul's and the bit of wax-candle, as if they had never known any other roof.

Ron Weasley’s mother in J.K. Rowling’s Harry Potter novels knitted jumpers (sweaters) for each member of her family every Christmas that reflected the person’s interest. Because Harry is such a close friend of the family, he gets a Weasley jumper each year. Hagrid is also a knitter, as we discover when he first took Harry to Diagon Alley: “Hagrid took up two seats [on the train] and sat knitting what looked like a canary-yellow circus tent.”

Jane Fairfax in Jane Austen’s Emma knits a pair of garters for her grandmother (Chapter 10).

It is thought that Penelope in Homer’s Odyssey was actually a knitter, not a weaver, as some texts have translated. The rationale for this is drawn from her actions while she awaits the return of Odysseus. To avoid commitment to any of the many suitors seeking her hand in marriage, she claims she needs to weave a burial shroud for Odysseus’ father Laertes — “she weaves every day, but then unravels her work every night.” Knitting scholars believe Penelope was actually ripping out her rows of knitted stitches.

Men also knit and apparently have done so for centuries. They also write about it — James Norbury, The Knitter's Craft, Knit with Norbury, Knitting is an Adventure and the classic Traditional Knitting Patterns. Others just do it. 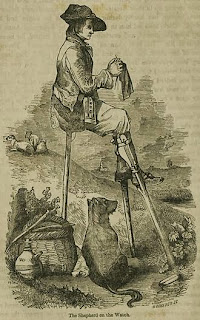 Okay, we’ve looked at a few characters in fiction who knitted, but what about the writers. Dorothy Parker, poet and short story author, took her knitting with her everywhere. In Hollywood, Dorothy knitted and dictated screenplay dialogue while her husband Alan Campbell typed them. Dorothy Parker’s review of a forgettable musical: “If you don’t knit, bring a book.”

In Knitting Yarns by Ann Hood (W.W. Norton & Company, 2013), twenty-seven writers tell stories about how knitting challenged, healed, or helped them to grow. For example, Barbara Kingsolver, Holding the Line: Women in the Great Arizona Mine Strike (1989), sheers a sheep for yarn. Elizabeth Berg, The Handmaid and the Carpenter (2006) writes about her frustration at a knitting failure. Ann Patchett, What Now? (2008) describes her life through her knitting. Andre Dubus III, Townie (2011) knit a Christmas gift for his blind aunt. Kaylie Jones, Lies My Mother Never Told Me (2009) finds the woman who used knitting to help raise her in France and heals old wounds. Sue Grafton, W is for Wasted (2013) shares her passion for knitting. Included are five original knitting patterns created by Helen Bingham, http://www.helenbinghamdesigns.com.

Knitting Christmas gifts is one of the activities Eleanor uses as she awaits the return of Barrett in my novella Christmas Gold.

Researching and crafting novels is a long process and the reward may be further down the road. Knitting is a great stress reliever and small projects provide immediate gratification.

I also knit historical patterns. It's fun to ferret out the meanings and terms that have changed over the years. For example, purling was called seaming or backwards knitting. Knit-two-together was abbreviated "N" - narrow by knitting two stitches together. Stitch names have also changed.

My favorite historical patterns are the Seafarer's Scarf and Hat. The original patterns were invented in 1898 during the Spanish American War. Mrs. E.A. Gardener, from what is now Manhattan, New York, conceived the idea of supplying our war ships with items that were needed. Included in the "comfort bags" were hand knitted scarves, hats, socks, mittens, and sweaters. Patterns and opportunities to contribute to the annual knitting campaign can be found at http://cas.seamenschurch.org/christmas-at-sea.

The Seafarer's Scarf and Hat and other patterns are offered by Christmas at Sea through The Seamen's Church Institute of New York & New Jersey, which is the longest continuous charity knitting program in the United States.

If you write, have you put knitting in your book?

P.S. — I did learn to knit baby booties and socks. I just finished chair leg socks for my wooden kitchen chairs so they wouldn't screech on the Travertine tile. Two sets down six more sets to go. 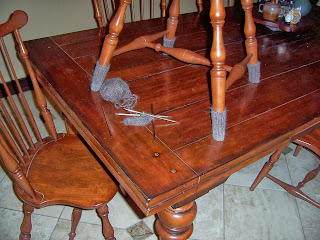