Touring Tyntesfield, the Setting of The Governess of Highland Hall With Author Carrie Turansky---and A GIVEAWAY! 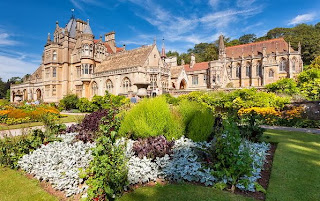 Early in 2012 when I started working on ideas for The Governess of Highland Hall, I wanted to find an English country estate for my setting. I am a visual writer, and finding images for my characters and setting brings the story to life for me. I loved visiting Highclere Castle where Downton Abbey is filmed, and I wanted to find an estate that gave a similar impression but was unique. After searching online, I discovered Tyntesfield, and I was delighted when I followed several more links to other images and articles. It was the perfect inspiration for the Ramsey family's Highland Hall. 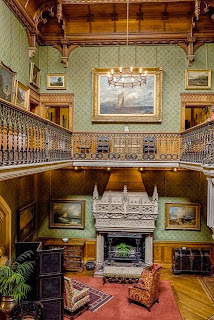 Tyntesfield is a beautiful Victorian Gothic Revival house and estate near Wraxall, North Somerset, England. The house is a Grade 1 listed building, which means it has special historic significance and cannot be demolished or changed without permission from the government.

The house is named after the Tynte baronets, who owned estates in the area since about 1500. The location was formerly a 16th-century hunting lodge, which was used as a farmhouse until the early 19th century. In the 1830s a Georgian mansion was built on the site. William Gibbs, an English businessman, who made his fortune by importing guano (bird droppings) from South America that was used to make fertilizer bought the house in the 1860s. Gibbs became the wealthiest non-noble in England for a time, and he enlarged Tyntesfield to become the beautiful estate it is today.

William and Blanche Gibbs were very dedicated to their faith, and they had a beautiful chapel added in the 1870s. The estate was passed down to each generation and remained in the family until 2001 when Richard Gibbs passed away.

Tyntesfield was acquired by the National Trust in June 2002 after a fundraising campaign was initiated to prevent it being sold to a private party and to ensure it would be open to the public. The first ten weeks after the acquisition, over 189,000 people visited Tynestesfield. They were eager to see the lovely estate that remained very much the same for the last 150 years. 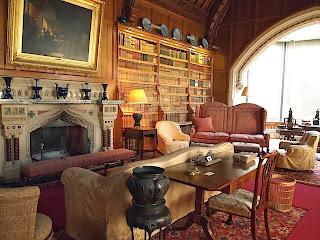 Several of the scenes in The Governess of Highland Hall are set in the great hall, the gallery, the library, and the nursery. So I thought you would like to see those areas of the house.

If you’d like to see more photos of Tyntesfield come visit my Pinterest boards. When you do, you can step back in time and meet the Governess and all the characters at Highland Hall.

I'm giving away a copy of The Governess of Highland Hall. Drawing is open only to mainland US and Canada. Which room at Tyntesfield is your favorite and why? I love to connect with friends on Facebook, Goodreads, Twitter, Pinterest, and through my website blog. I hope to see you there!


The Governess of Highland Hall 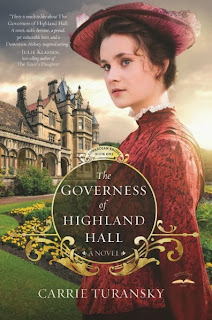 Missionary Julia Foster loves working alongside her parents, ministering and caring for young girls in India. But when the family must return to England due to illness, she readily accepts the burden for her parents’ financial support. Taking on a job at Highland Hall as governess, she quickly finds that teaching her four privileged, ill-mannered charges at a grand estate is more challenging than expected, and she isn’t sure what to make of the estate’s preoccupied master, Sir William Ramsey.
Widowed and left to care for his two young children and his deceased cousin Randolph’s two teenage girls, William is consumed with saving the estate from the financial ruin. The last thing he needs is any distraction coming from the kindhearted-yet-determined governess who seems to be quietly transforming his household with her persuasive personality, vibrant prayer life, and strong faith. While both are tending past wounds and guarding fragile secrets, Julia and William are determined to do what it takes to save their families—common ground that proves fertile for unexpected feelings. But will William choose Julia’s steadfast heart and faith over the wealth and power he needs to secure Highland Hall’s future?