Viking Warrior Women and their Weapons plus Giveaway

Heather will be giving away one ebook copy of God's Daughter to one commenter. To enter, leave a comment at the bottom of the post.

Now, I usually try NOT to post about Viking women using weapons. Images of Xena: Warrior Princess and Hagar the Horrible's wife spring to mind. With my Viking historical, God's Daughter, I was trying to dispel some of those horned-helmet images.

But historically, we know Viking women would've known how to protect themselves and their families. The sagas show they weren't afraid to use weapons. So when I wrote about a small group of Viking women who sailed to the New World with a large group of Viking men, I knew they had to be prepared to "take up arms."

I had two main female characters, and I wanted each of them to use a signature weapon. Both of them know how to use a sword, but for a more personalized touch, I gave them each something a bit different.

Gudrid, the more nurturing, healer type, used something she kept close to her (in a sheath on her thigh). It was actually her dead first husband's weapon (she's twice-widowed when this novel begins). It is a bit long for her, but believe me, she was ready to use it. This weapon is called a seax.

The description of a seax on the Museum Replicas site is this: "The seax, or sax, was universal in Northern Europe. Carried and used by the Saxons, Angles, Vikings and German tribes, its use probably dated before the fall of Rome and continued on into the early Middle Ages. From small knives with 3-4 inch blades to actual swords with blades of 27-28 inches and always single-edged, the profile of the seax varied a great deal. The original version of this large knife served from camp work to cutting work, on shipboard, and for fighting if a sword or axe was not available." 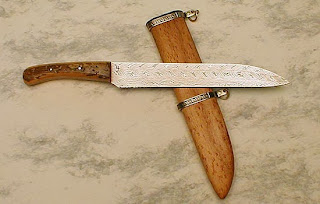 Freydis, Gudrid's sister-in-law (and Eirik the Red's daughter), was, according to the sagas, a true warrior-woman, with little thought for her life. I wanted her to be dangerous and fierce...as dangerous as the men. She hunts with a bow, but she also had a curved knife that was like her favorite item in the world: 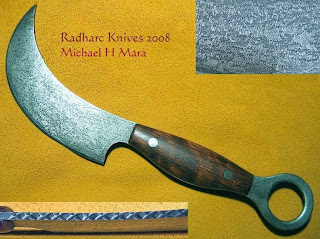 Since Freydis has long fingers, it was easy to imagine that loop wrapped about her little finger...I was trolling around the internet, looking for Viking knives, and I found this one, made by Michael Mara. The man is a professional knife-maker, and I'm not sure if this is based on actual archeological finds, but he calls it a Viking skinning/hunting knife. I kind of fell in love with it as much as Freydis did.

Viking swords and axes were the men's weapons of choice in my novel. If you want to watch an enlightening film on just how long it took to make a specialized steel Viking sword called the Ulfbehrt, you need to watch this video on Netflix: Secrets of the Viking Sword, in which a master swordsmith today recreates this legendary sword.

I did use a little liberty envisioning my Viking ladies' weapons...but that's the freedom we have as historical fiction authors. We know Vikings were talented craftsman, so it's not a far stretch to imagine Freydis might've had a curved hunting knife or that Gudrid strapped her dead husband's weapon to her thigh (versus on her belt, where many Viking re-enactors carry knives).

I think the thing I wanted people to realize is that Vikings were not dumb. They had all kinds of skills, not limited to invading and plundering. Viking women loved their families and would give their lives to protect them, just like women today. And I believe they had a variety of weapons at their disposal to do just that.

God's Daughter:
One Viking woman. One God. One legendary journey to North America. 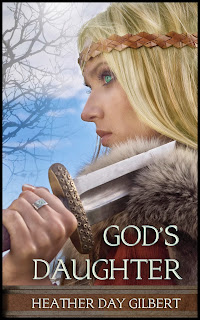 In the tenth century, when pagan holy women rule the Viking lands, Gudrid turns her back on her training as a seeress to embrace Christianity. Clinging to her faith, she joins her husband, Finn, on a journey to North America.

But even as Gudrid faces down murderous crewmen, raging sickness, and hostile natives, she realizes her greatest enemy is herself--and the secrets she hides might just tear her marriage apart.

Almost five centuries before Columbus, Viking women sailed to North America with their husbands. God's Daughter, Book One in the Vikings of the New World Saga, offers an expansive yet intimate look into the world of Gudrid Thorbjarnardottir--daughter-in-law of Eirik the Red, and the first documented European woman to have a child in North America. 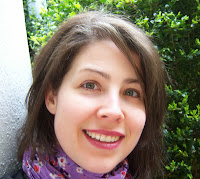 Heather Day Gilbert enjoys writing stories about authentic, believable marriages. Sixteen years of marriage to her sweet Yankee husband have given her some perspective, as well as ten years spent homeschooling her three children. Heather is the ACFW West Virginia Area Coordinator.

You can find Heather at her website, Heather Day Gilbert--Author, and at her Facebook Author Page, as well as Twitter, Pinterest, YouTube, and Goodreads. Her Viking novel, God's Daughter, is here on Amazon and Smashwords now, with a soft-cover version slated for release later in November.


Remember Heather will be giving away one ebook copy of her novel. To enter, like her facebook page and leave a comment with your email address below.
Posted by Naomi Rawlings at 1:00 AM