Mount Of The Holy Cross

Hi!  Winnie Griggs here.  Today I want to share with you a little tidbit of history I stumbled across in my research.

During the early days of the westward movement, when travelers and adventurers were still exploring the Colorado Rockies, there was a legend about a great wonder to be found hidden in a rugged and nearly inaccessible area of the great mountain range.  Rumors floated around for decades about an immense cross of snow that appeared only occasionally on the face of a high mountain peak.  Word of its existence inspired many of the curious and/or devout to seek it out.  But most who claimed to have seen the natural wonder stumbled on the sight accidentally, while others who searched diligently never caught so much as a glimpse.  And even those who saw it, found that it would subsequently disappear from view.

One of the earliest recorded sighting comes from author Samuel Bowles in his 1869 book, The Switzerland of America.  In it he wrote   “Over one of the largest and finest, the snow fields lay in the form of an immense cross, and by this it is known in all the mountain views of the territory. It is as if God has set His sign, His seal, His promise there--a beacon upon the very center and height of the Continent to all its people and all its generations...as if here was a great supply store and workshop of Creation, the fountain of Earth."

After the Civil War, the Department of the Interior turned its attention to continuing the exploration of the West, including mapping and charting the landscape.  As part of that endeavor they hired photographers and engravers to accompany the expeditions in order to capture images of the environment and the people who populated it.  Photographer William Henry Jackson was picked to accompany the US Geological and Geographic Survey of the Territories from 1870 to 1878.  During that period, heard the rumors and legends about the extraordinary cross and became determined to be the first to photograph it.  He set out to do so in the summer of 1873.  An experienced wilderness photographer, he led a small party to what was rumored to be the best vantage spot.  But this was no easy trek up the mountain.  This arduous climb involved carrying hundreds of pounds of equipment without the aid of pack animals.  When they finally reached their destination, Jackson and his team spent a night in the high altitude air so that he could be in just the right spot to take the perfect picture when the sun rose.  But all these efforts proved to be worth it.   That photograph won numerous awards and, among other things, inspired Henry Wadsworth Longfellow to pen his poem The Cross of Snow. 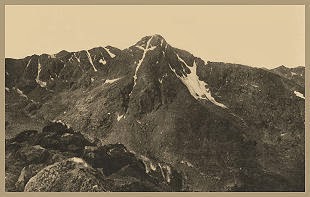 The next year, western artist Thomas Moran accompanied the expedition and made several rough sketches.  When he returned to his studio he did not attempt to create a faithful reproduction of what he’d seen, but rather a “true impression.  As one website stated “In an attempt to capture the "true impression" of the scene rather than a topographical view, Moran freely invented the foreground waterfall in his painting. Forthright about his approach, Moran declared, "I place no value upon literal transcripts from Nature. My general scope is not realistic; all my tendencies are toward idealization....Topography in art is valueless."  The result was the 7’ x 5’ painting Mountain of the Holy Cross, finished in 1875.

Both ’s photograph and Moran’s painting were exhibited in the 1876 Centennial Exposition held in .  The public was immediately looked for religious implications of this natural wonder.  Many saw the presence of the cross in this particular location as a blessing on the idea of the nation’s Manifest Destiny to continue the westward expansion.  Others went so far as to assign it curative powers.   It became the destination of many pilgrimages and was credited with many cures.
Now for the scientific explanation.  Centuries of erosion carved two very deep ravines in the rugged rock face, and these intersected at a ninety degree angle.  These ravines fill with snow during the winter months, and their steep walls keep that snow sheltered in the spring and part of the summer, well after the rest of the mountain’s snowfall has melted away.  It does eventually melt as well, but for 2-3 months every year, a dramatically perfect white cross could be viewed from great distances.  The vertical portion of the cross is about 1200 feet long and 50 feet wide.  The horizontal arms have a combined length of about 700 feet (though this varies with the season).  The altitude of that particular mountain peak is just over 17,600 feet.
.
In 1929 President Herbert Hoover designated the Mountain of the Holy Cross a National Monument.  The monument was then transferred from the USDA Forest Service to the National Park Service in 1933.  Then in 1950 it lost its National Monument designation and was returned to the oversight of the Forest Service. 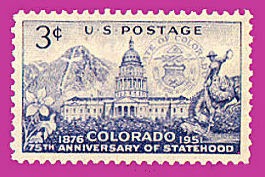 Eventually, visitation to the site fell off, and nature took its toll on the mountain itself as well.  Erosion has caused the right arm of the cross to virtually disappear, making it difficult to visualize the cross as it once was.

The AmericanDigest.org site describes it this way:  “The Mountain of the Holy Cross began as a myth and became a rumor. Then it became a report, a photograph, and a painting. In time it became a destination for pilgrims and tourists. Shortly after that it ceased to exist.”

So what do you think?  Do you think this was just some natural phenomenon, some accident of nature?  Or do you believe it was put there at that time and place for a purpose?

And do you have any first hand experience with this or any other natural phenomena you’d like to share with us?
Posted by Winnie Griggs at 12:30 AM