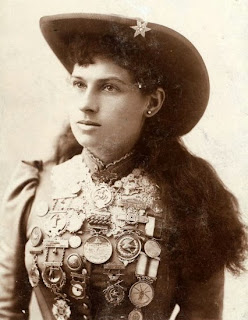 Phoebe Ann Moses--do you recognize the name? Some sources site her last name as Mosley. Phoebe was born in August 16th, 1860, in Ohio. She grew up in a poor family, and after her father died, she was sent to Darke County Infirmary in Ohio, where she was educated and taught to sew. At age ten, she was sent to work for a family who treated her cruelly. She called them “the wolves” and soon ran away and returned to her family. She helped support them by hunting game and selling it to a local shopkeeper. Her shooting skill grew quickly, and she was soon able to pay off her family’s mortgage.

Have you figured out who she is yet?

Annie Oakley, the most skilled female shooter of the 19th century. 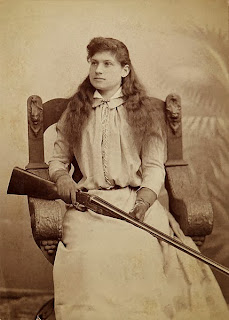 In 1875, when Annie was just 15, she stunned Frank Butler, an expert shootist and vaudeville performer, when she beat him in a Thanksgiving competition. Frank fell in love almost at first sight, and the next year, he and Annie married. A few years later, when Frank’s partner took ill, Annie replaced him, amazing audiences with her shooting skills. At that time, she adopted the stage name of Annie Oakley. They joined a vaudeville show, and Annie began making her own costumes--ones more modest than the risqué outfits the other females wore.

In 1884, Anne met Sitting Bull, the Sioux Indian chief. He was so impressed with her abilities that he dubbed her “Little Sure Shot.” In 1885, Annie joined Buffalo Bill’s Wild West show and performed in the show for the next seventeen years. Annie dazzled audiences by shooting the flame off candles and corks out of bottles. She even shot off the end of a cigarette that her husband held in his teeth. Talk about trusting your wife! Annie could shoot distant targets while looking into a mirror, hit the edge of a playing card at 30 paces, and shoot holes in cards thrown into the air before they hit the ground. 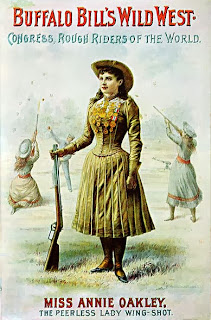 Annie toured Europe for three years and even met Queen Victoria. In 1901, Annie was injured in a railroad accident and partially paralyzed for a time, but she recovered and went on the star in a melodrama called The Western Girl. After she and Frank retired, Annie did exhibition work to raise money for orphan charities and the Red Cross. Annie died on November 3, 1926, and just eighteen days later, Frank joined her. Annie’s life was commemorated by the Irving Berlin musical, Annie Get Your Gun. She will always be known as America’s first woman superstar.

Call of the Prairie, book 2 in the Pioneer Promises series by Vickie McDonough.

Sophie Davenport fears life is passing her by. Her strict, overprotective parents have kept her close to home because of the severe asthma attacks she sometimes endures. She longs to live a normal life and hopes to marry, but that dream seems impossible. When her aunt has a tragic accident and requests someone come to Kansas to help her, no one is available except Sophie. Her father, tied up with business, reluctantly agrees to let her go. Sophie is ecstatic and sees this trip as her one chance to prove to her parents—and herself—that she’s capable of living on her own. But things in the small town of Windmill are not as her aunt portrayed. And her aunt’s handsome neighbor, guardian of two of the children her aunt cares for after school, obviously doubts her abilities. Will the Kansas dust, the drama, and difficulties prove too much for Sophie? Or will she lose her heart to her neighbor and succumb to the call of the prairie?