This month, I have a new book out called The Wyoming Heir, and as the title indicates, the book has an heir from Wyoming in it. (A rather handsome, rugged, cowboy heir. Because who doesn't love a rugged cowboy every now and then?)

One of the things I enjoyed the most when researching my cowboy was looking at old paintings and photographs of the West. My hero, Luke Hayes, hails from the Grand Teton Mountain area of Wyoming. This part of the country was discovered way back, about the time when Lewis and Clark were exploring the west. In fact, the 1807 discovery of Jackson Hole Valley is credited to a man named John Coulter, who was on the Lewis and Clark expedition. While it would be another 65 years before any settlers laid claim to the Jackson Hole and Teton Valleys, numerous painters and photographers helped to record this scenic area.

Albert Bierstadt was a German-American who painted brilliant landscapes of the American West. He has beautiful canvases of The Jackson Hole Valley, Lake Tahoe, Yosemite, and Sierra Nevadas, among other things.

Thomas Moran was another painter who focused on western landscapes, particularly those of the Rocky Mountains. His work is credited with helping to preserve Yellowstone as a national park.

Ansel Adams was a photographer, not a painter, and one who lived during the twentieth century. Even so, his black and white landscape photographs have gone far in acquainting the American people with the majestic views of the west.


From the images above, you can see why I had such fun writing about a character who lives in the shadows of the Teton Mountains.

What about you? Do you have a favorite place in the western United States? What's the most beautiful place you've ever visited? 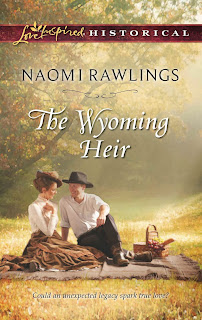 Given a choice, Luke Hayes wouldn't ever leave his Wyoming ranch. Yet when his estranged grandfather dies, leaving him everything, he'll travel to Valley Falls, New York—but only to collect his sister and his inheritance. He won't be roped into saving a floundering girls' school, no matter what mathematics teacher Elizabeth Wells says.

Elizabeth has defied social convention and her own family for the sake of her beloved Hayes Academy. Luke is pure rancher, from the tip of his Stetson to the scuff on his boots, yet he's also becoming her unlikely ally. Only he can help save her job and school…but how much will she lose when the time comes for him to leave?

For more information about Naomi Rawlings and her books, visit her website at www.naomirawlings.com.