Laurie Kingery here--I'd like to continue my series on the lesser-known tribes of Texas with the Karankawa tribe. They became extinct by 1860, but they certainly made an impression while they existed because of their reputation as cannibals. 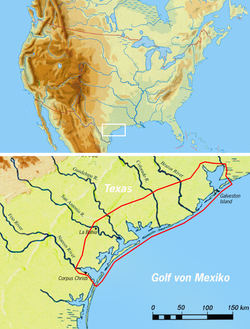 The Karankawas, known in their language as the Auia, inhabited the coastal area of Texas from Galveston Bay in the Houston area south to Corpus Christi Bay. The meaning of their name is not certain; it may mean "dog-lovers" or "dog helpers" because they had dogs that were fox- or coyote-like.
There is speculation that the Karankawas came from the Carib Indians because they were so tall—the males averaged six to seven feet. But this has never been proven. The men were striking in appearance, usually naked and heavily tattooed and with pierced nipples and lower lips. The women wore their hair long and painted their entire bodies if married; single women had only a stripe from forehead to chin. Women wore deerskin shirts and breechclouts. Both sexes used shark and alligator oil to repel mosquitoes. The tribe practiced head-flattening. 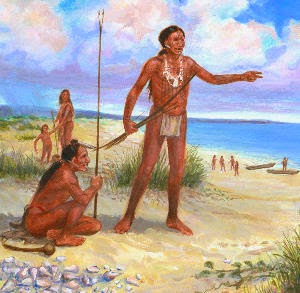 They did not farm, being a nomadic people that migrated between the barrier islands and inland present-day Texas. They took advantage of the bays and lagoons as well as the Gulf, eating oysters, clams, crabs, redfish, spotted seatrout and black drum. In the summer months, the shellfish were not safe to eat, and the fish migrated out of pass between the mainland and the barrier islands, so the Karankawa migrated inland. They may also have done so to get away from hurricanes. The picture below is a plaque marking the site of a Karankawa settlement on the west end of Jamaica Beach, Galveston Island.

The tribe had some interesting customs. For example, they had three gender roles: male, female and a third group made up of men called berdache because they took on female roles and activities and played a special role in their religion. They were also passive sexual partners for some of the other men. The women sold and traded or even offered themselves to get things. Divorce was easily obtained before children were born to a marriage, but rare afterwards. They made a distinctive pottery with an inside coating of asphaltum, a natural tar that washes onto Gulf beaches, and lived in circular 10-12 foot huts covered with hides and mats. They travelled in dugouts made by the women of twisted-together poles. Their bows were of cane and 5-6 feet long, with arrows three feet long—the better to retrieve fish they had shot. 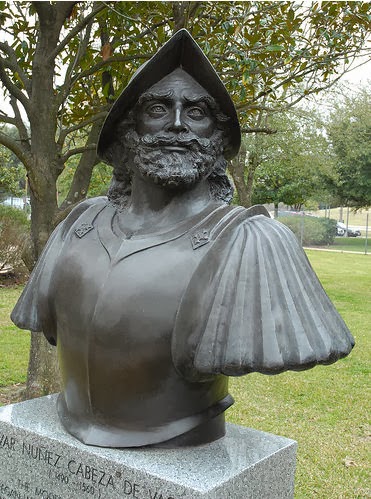 The first Europeans to come across this tribe were the Spanish, such as the explorer Cabeza de Vaca, who wrote favorably about them because they took care of him and his band when they ran aground in Galveston Bay in the 1530's. He then lived with the tribe for several years. Some of the tribe became Christians and lived in missions; others went to live with the Lipan Apache.

DeVaca denied the Karankawas were cannibals; in fact he admitted he and his own men had resorted to cannibalism when they shipwrecked. Others insisted that the tribe did indeed indulge in ritual cannibalism of their enemies, believing that eating their captives' flesh would transfer their power to the Karankawa. Some sources indicate the victims were not always dead when this flesh was taken, but sliced off while the victims were tied to a stake. The flesh was roasted in front of the victims and eaten.

When the pirate Jean Lafitte was kicked out of Louisiana and came to live in Galveston in 1817, the Karankawas tried to retrieve one of their women who had been taken to his so-called "kingdom of Campeche" but had to retreat after the pirates inflicted heavy casualties. The Indians didn't get along with the Anglo settlers in Stephen Austin's Mexican colony either, and sided with the Mexicans in the Texas war for Independence. Their chief, Jose Maria, and most of his warriors were killed. An early Texas Ranger, Noah Smithwick, called them "The most savage-looking human beings I ever saw."

The last known remaining Karankawa was killed by Mexican general Juan Cortinas in 1858, though in 2009 an army veteran of Vietnam, Bosnia and Desert Storm claimed to be the last descendant.

All photos courtesy of Wikimedia and Wikipedia
Posted by Laurie Kingery at 1:00 AM