"I don't see how we could have an army without music."

Music played an integral part of the Civil War, whether drumming cadence as soldiers went into battle, bugling commands or the men themselves simply singing a favorite of both the Confederates and the Union forces, Home! Sweet Home!

Both sides had brass bands to accompany their battles. Musicians earned more money than the privates in the beginning of the war, but as the war waged on, many of the those musicians were needed more to carry a rifle rather than a bugle and the ranks of musicians began to be filled with young boys. One of the youngest was twelve-year-old Johnny Clem also known as Johnny Shiloh.

Many well-known songs were written and/or popularized during the Civil War such as, Dixie (one of Abraham Lincoln's favorites, interestingly enough), Battle Hymn of the Republic, When Johnny Comes Marching Home Again and Taps which is still played at military funerals today. President Lincoln declared Dixie to be Federal property after the war was over so that the Confederates would be free once again to sing it. It is reported that the survivors of the disastrous Pickett's Charge returned singing Nearer My God to Thee. 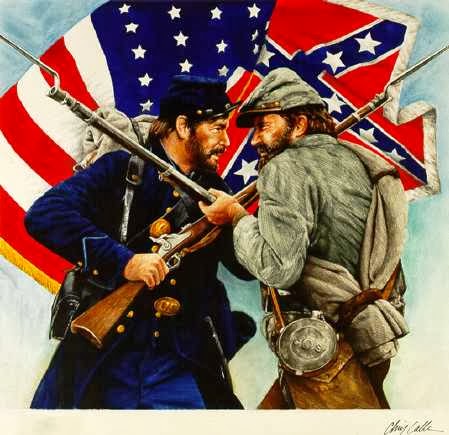 Music served as an oasis of peace for the men as well. Many instances are cited where the men on opposing sides joined in singing a hymn or listened to first one side's band and then the other, then resumed the fighting once the "concert" was over. At Fredericksburg, VA, in the winter of 1862-1863 the Union band and Southern band responded back and forth, trading their respective patriotic songs, then ended with both sides joining in singing Home! Sweet Home! culminating with cheers from all of the men.

All wars have had their music, but the Civil War left a legacy of music behind like no other war. Many modern singers have picked up some of the popular songs of that terrible time in our country and recorded them ... Elvis Presley being the most prominent. Somehow those songs have lingered in the memories of the American people perhaps more than any other. The singing and playing of Dixie and The Battle Hymn of the Republic still stir the hearts of Americans today ... not in division, but in unity.

Would love for you to consider reading my Civil War novel, set in Texas, His Steadfast Love. And please visit my web site at www.goldenkeyesparsons.com

Golden Keyes Parsons writes historical fiction, and is also a popular retreat/conference speaker. Her highly acclaimed Darkness to Light Series (Thomas Nelson Publishing) chronicled the journey of her French Huguenot ancestors in 17th century France. Her fourth novel, His Steadfast Love, is a Civil War novel set in Texas. Her latest releases are ebooks (WhiteFire Publishing) – a biblical fiction series entitled Hidden Faces, Portraits of Nameless Women in the Gospels. Golden lives in Waco, TX, with her husband, Blaine, where they enjoy their children, grandchildren and great-grandchildren and are avid sports fan of their alma mater, Baylor University.