One question I've been asked several times during blog interviews--who was your biggest writing influence—or what author influenced your writing the most. I didn’t have to think long to decide. While I have many current Christian authors that I love, as well as who wrote in the early part of the 20th Century, none impacted my writing like Zane Grey. 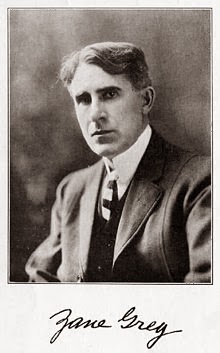 I started reading his books as a young teen, and I was captivated by the thrilling depictions of the Old West, an era I longed to visit. Since I knew of no way to travel back in time, books and movies were my best recourse—and his books definitely fed that hunger. By the time I was in my late twenties, I had read all of his Westerns, as well as some of his boy’s adventure series. After that, I started collecting them, and I own every Western and all of the boy’s books---many in first edition.


Zane Grey was born in the era I love to write…the last thirty years of the 19th Century. In fact, he was born in 1872, so he was a teenager in the late 1880s and would have experienced firsthand much of what he wrote. 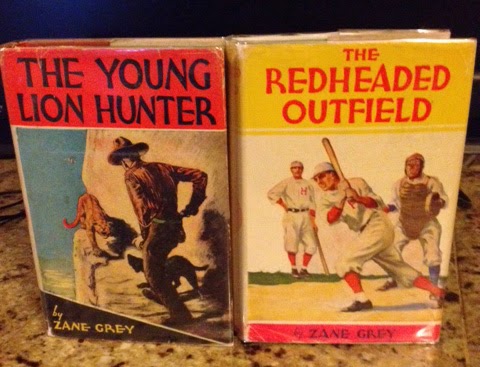 He passed away in 1939, after writing over 90 books that sold over 4 million copies (amazing in that time period), with many magazine stories, 112 movies, two TV episodes, and one TV series.

Zane wrote his first book at the age of fifteen. His father found it, tore it up, and beat him. The young man then turned to baseball and dentistry (his father’s occupation) and it wasn’t until years later that he wrote and published his first book. He visited most, if not all, of the places he wrote about, camping, fishing, hiking and exploring the mountains and range of the West., and bringing vivid descriptions to his work, as a result.

When he started writing, and even later after he was multi-published, some of his books were serialized in magazines, where 2-4 chapters were printed each issue. That was where I got the idea for my current hero, Jeffery, in Wishing on Buttercups, to have his first novel picked up and serialized by a magazine.

I was very blessed to find one of the magazines carrying the first few chapters of one of my favorite books of his, Raiders of the Spanish Peaks, at an antique store. Here's a picture of the magazine and the first page of the story.

Miralee Ferrell has ten books total, with four in the Love Blossoms in Oregon series, historical romance set in Baker City, Oregon in 1881. The first is Blowing on Dandelions and released June, 2013, the second is Wishing on Buttercups, a brand new release February 1, 2014. The third is Forget Me Not, a novella (see summary below) releasing the end of March on Amazon Kindle and paperback, then Dreaming on Daisies, releasing Oct. 1, 2014 (all three full-sized books are available in all stores and online).

Can a Lost Love Be Redeemed?

Seven years ago, Julia McKenzie rejected the man she loved, wanting to experience more of life. Now, at the age of twenty-four, she regrets that decision. What will Seth think of her, when they encounter one another hundreds of miles from home? Will the man she cared for understand the direction her life has taken and love her in spite of her choices?

Pastor Seth Russell has never completely forgotten the girl he once courted. When she shows up in his new home of Baker City, Oregon, all those feelings return. But why is she sneaking around town late at night? Even more important, will she reject him and break his heart again?


Posted by Miralee Ferrell at 1:00 AM