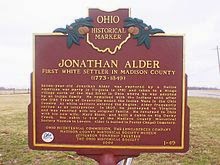 Hi, Laurie Kingery here, and this month I'd like to tell you about a pioneer figure in Ohio history, Jonathan Alder, before I get to my giveaway…:)

Jonathan was born in 1773 and was living in Wythe County, Virginia when, at age eight, he and his brother David were sent out to search for a couple of runaway horses. They ran into a group of Shawnee Indians from Ohio. David was killed and scalped when he tried to run, and the group, along with a neighbor woman and her child who were also captured, traveled to a Mingo Indian village near present-day Chillicothe, Ohio. On the journey the Indians killed the child, with whom they'd grown impatient, and beat the woman when she protested. Jonathan Alder was apparently spared because he had black hair, which they reasoned would allow him to pass as an Indian more easily.

When they arrived in the Mingo village, Jonathan learned one of the chiefs, Succohanos, and his wife had lost their son and wanted to adopt a captive as a replacement. He had to run the gauntlet first to prove himself worthy. The white woman who was taken with them was given to another Indian man in the village during Alder's adoption ceremony.

Alder was ill a lot when he first began to live with the Indians, a fact he attributed to their diet. The Indian children were friendly to him and taught him their language and customs. In time, he adopted their ways and lived as an Indian; so much so that when a white Kentucky trader offered to exchange him for an Indian prisoner, he refused, and accompanied the Mingos on raids to Kentucky.

When his adoptive Indian parents died, Alder wandered from village to village and began courting an Indian woman from the Upper Sandusky area, Barshaw. In 1793 during the Northwest Indian war, he joined Shawnee chief Blue Jacket to fight Anthony Wayne, taking part in the attack on Fort Recovery. He advised the  the Indians to sign the Treaty of Greenville, but he did not attend the signing. This treaty restored the peace between the Indians and the settlers, and so he decided to return to the whites.

He married Barshaw and settled near present day Plain City, Ohio, relearning white ways and customs. His wife did not adjust as easily. Their two children died in infancy. The couple decided the Great Spirit was opposed to their marriage and separated. Alder let Barshaw keep most of their possessions.

Alder then regained an interest in his original Virginia family, who was fortunately still alive. He was reunited with his mother and siblings and stayed with them a year. While with him he fell in love with Mary Blont, and they were married in 1806. The same year, they returned to the area where he had lived with his Indian wife and built a cabin along Big Darby Creek.

During the War of 1812, Alder was elected captain of a company of seventy men, and built a blockhouse to protect the Darby settlements. This fort was the only one ever built in Union County and the foundation still remains.

After the war, Alder returned to farming, and continued to visit other former Indian captives. He died in 1849 at age 75. He has a school named after him in Plain City. The cabin he built is now located in the Madison County Historical Society Museum.

And now to get to my giveaway! One lucky commenter will receive a copy of my latest release, THE PREACHER'S BRIDE CHOICE, the first of a three-author continuity series from Love Inspired Historicals about the Oklahoma Land Rush of 1889. I hope readers will also seek out the other two books in the series, THE HORSEMAN'S FRONTIER FAMILY, by Karen Kirst, in May, and THE LAWMAN'S OKLAHOMA SWEETHEART by Allie Pleiter in June. 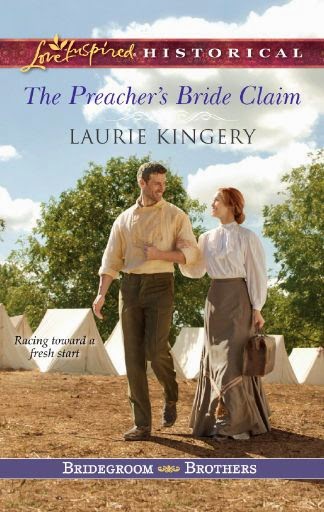 Blessings, Laurie Kingery
All photos are courtesy of Wikimedia Commons.