What type of citizen are you? Do you follow every single rule you know every time without fail? Do you allow a margin of error depending upon the circumstances? Or are rules merely guidelines, and you follow them when it suits you? 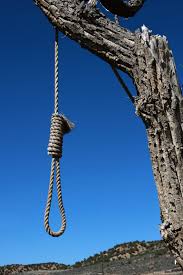 I'd probably put myself in the middle, allowing a margin of error. Of course, when a cop is waiting for you to drive by at 5 miles over the speed limit, this doesn't often bode well for you, and a speeding ticket is likely. That happened to me recently, only there was a pickup truck right next to me on the interior lane between me and the police car, and the truck was in the process of passing me, so I'm not certain which car the cop clocked. It had been about 17 years since I'd been pulled over, so thank you to our justice system which allows the chance to plead your case before a judge and be heard. 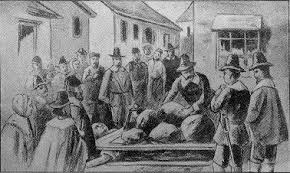 That got me thinking about law in the past and the consequences of breaking the law, whether that law was written or not. By today's standards, some of the punishments would be considered barbaric. So much was black and white with no room for gray, and while we're used to being able to find a loophole today, that often wasn't possible in previous centuries as punishment was enforced on the spot or very soon after the crime was committed.

What we know of today as policemen didn't really come into existence until the mid 1800's. Most times, folks too matters into their own hands and performed what some call "vigilante justice" which could be likened more to a "mad mob mentality" than anything remotely resembling "order." If someone wronged another, the person wronged would enact judgment right then, and if punishment was warranted, it happened immediately. This could happen in the form of a stoning, a beating or whipping, being drawn and quartered or tarred and feathered, a hanging, a robbing, property destruction, torture, dragged to death while tied to a horse or vehicle, and any number of options deemed suitable by the individual wronged.

Can you imagine being sentenced to death by burning at the stake, or pressed to death by a pile of rocks, or attacked by a mob rallying in support of the one you *might* have wronged? And can you imagine if the one accused was actually innocent, yet they still paid the price? For some, a swift justice served is exactly what's needed, but for others, allowing a little time between the crime committed and the sentencing might actually be more than an act of mercy on behalf of the guilty. It might be freedom to one NOT guilty.

What are some of the worst punishments you've read about, seen in a movie, or heard about, or even written about if you're a writer?

When have you been wronged and wished for a punishment method that was a bit more expedient?

BIO
Tiffany Amber Stockton has been crafting and embellishing stories since childhood. Today, she is an award-winning author and speaker who helps people look younger and live better by partnering with Nerium International. She lives with her husband and fellow author, Stuart Vaughn Stockton, in Colorado. They have one girl and one boy, and an Aussie/retriever mix named Roxie. She has sold fourteen books so far and is represented by Sandra Bishop of MacGregor Literary Agency. You can also find her on Facebook and Twitter.
Posted by Tiffany Amber Stockton at 5:00 AM