Memorial Day - How It Came To Be

As I was pondering what my topic for this blog would be it hit me that this particular post would be going up on Memorial Day.  So I decided that a fitting observance would be to discuss a little about the origins and history of this special day.

In 1866, as the country was trying to heal from the long and bloody Civil War, a drugstore owner in Waterloo, NY by the name of Henry Welles, watched the surviving soldiers come home, some with horrendous injuries and missing limbs, most with nightmarish stories to tell.  Mr. Welles decided he had to do something to recognize the sacrifices that had been made.  He discussed his idea with General John Murray, a war hero and intensely patriotic man.  General Murray supported the idea and helped rally the local veterans’ support.

Welles’ and Murray’s suggestion that the businesses in town close up shop for one day to remember and honor those who had given their lives in the war and were buried in the town cemetery was met with community-wide approval.  On May 5th of that year the shops did indeed close.  The entire village was draped in evergreens and mourning black, flags were flown at half mast and the townspeople marched to the three town cemeteries to the sound of martial music.  Solemn ceremonies were held and the graves were decorated with wreaths, flowers and crosses.
The ceremony became an annual event.

On May 30th, 1868 General John A. Logan, commander-in-chief of an organization of veteran soldiers and sailors called the Grand Army of the Republic, established Decoration Day with this declaration in his General Order 11:
The 30th of May, 1868, is designated for the purpose of strewing with flowers, or otherwise decorating the graves of comrades who died in defense of their country during the late rebellion, and whose bodies now lie in almost every city, village, and hamlet churchyard in the land. In this observance no form of ceremony is prescribed, but posts and comrades will in their own way arrange such fitting services and testimonials of respect as circumstances may permit.

May 30th was chosen as the date in part because it was not the anniversary of any given battle and so could stand on its own.  That first year, General James Garfield, who would later become the 20th president of the , gave a speech at .  Afterwards, an estimated 5,000 people pitched in to adorn the graves of the more than 20,000 Civil War soldiers, both and Confederate, who were buried there. 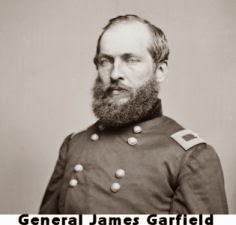 In 1882 the name was changed to Memorial Day and by the end of the nineteenth century, towns and communities across the nation were observing the day in some way.  After World War I, the observances expanded to recognize and honor those Americans who had died in any war in service to their country.

Of course those early observances in were not the sole or even the first such ceremonies.  Local observances of this type had been undertaken in many towns across the country since the end of the Civil War.  In fact, even though President Lyndon Johnson in May of 1966 declared Waterloo NY to be the birthplace of Memorial Day, over two dozen cities, both in the North and the South, still claim to hold that honor.  Among them are , , and .  It is said Waterloo NY received the official nod from President Johnson because it was the one town that had made Memorial Day an annual event, one the entire community supported by shutting down businesses for the day and showing up in large numbers to honor the fallen.

In 1971, Congress declared Memorial Day a national holiday to be celebrated on the last Monday in May.  On the national front, Memorial Day is observed at in with special reverence.  In the early hours of the Friday before Memorial Day, soldiers of the Third US Infantry walk along the rows of over 200,000 grave markers, pause before each and place the shaft of a small flag into the ground before it.  These soldiers are members of the Old Guard, a special regiment, and it is considered an honor to be selected for this duty.  As one soldier said “They have done their job and now it is time to do mine.” On Memorial Day itself, it is customary for the president or vice-president to give a speech honoring the contributions of these fallen heroes and to place a wreath at the Tomb of the Unknown Soldier.  Members of the armed forces shoot a rifle salute in the air.  About 5,000 people attend the ceremony each year (the same number who attended that first ceremony with General Garfield presiding).

I hope that today, whatever your plans, you will take some time to remember and honor those who have given their lives to protect the freedom and quality of life that we Americans enjoy.
Posted by Winnie Griggs at 12:30 AM