Law and Disorder and Book Giveaway

"The closest any of those lawyers came to

'passing the bar' was to walk by a saloon."

-Courting Trouble from Four Weddings and a Kiss 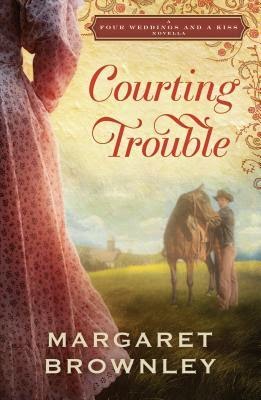 In my novella Courting Trouble (part of the Four Weddings and a Kiss collection)  my heroine Grace Davenport is in big trouble.—the kind of trouble no sane man would want to mess with.   Not even Wild West attorney Brock Daniels.  Not only is his beautiful  new client charged with killing her husband, her two previous husbands died under dire circumstances.

Things sure don't look good for Grace and when I sat down to write her story I had no idea how my hero would defend her. It was time to hit the research books.

My research for this story turned up many surprises. Namely, the number of lawyers required for frontier justice. Whenever a large mining boom began lawsuits were filed in incredible numbers. "Go west young man" went double for lawyers.

“We didn’t need laws until the lawyers got here.” -disgruntled citizen

The wilder the town, the more lawyers (and doctors) it required. Not everyone welcomed the onslaught of lawyers, of course, but most accepted them as the cost of doing business.

Tombstone became a favorite gathering place for lawyers many of whom became rich and ran for office.  Residents dubbed the street occupied by lawyer offices Rotten Row.

A court could be held indoors or out.  In one  murder trial the jury sat on the coffin containing the corpse of the victim.  Most trials allowed for regular recesses for "liquid refreshment."  One well-known lawyer was routinely locked up in a hotel room prior to trial to assure he would be sober enough to defend his clients.

Three for the price of one

One of the strangest trials I ran across took place in California in 1845.  During the trial of Joseph Wilson, William Ide served as judge, prosecutor and defense attorney. As the district attorney, he questioned his witness and was careful to object to his own questions when needed.  He then moved to the bench to rule on the objection.

Women didn't have the right to vote, but that didn't keep them from making their presence known in court. Margaret Cody of Denver owned a notions shop with her husband but spent most of her time suing and being sued.  I found a dozen lawsuits she was involved in and that was just during Colorado's Territorial years. When Colorado became a state, she happily continued to enjoy litigation far into old age.

It seems like everyone in the Wild West practiced law in one way or the other, which led a  character in my story to lament,  "Unless you know the trial of having a wife, you know nothing about law and order.”

I'm giving away a copy of Four Weddings and a Kiss (written by Robin Lee Hatcher, Debra Clopton, Mary Connealy and me).   For a chance to win this Romantic Times Top Pick, name your favorite TV,  movie or literary lawyer.

Book can be ordered from your favorite bookstore or on line.
Also the four of us are giving away a mini iPad. To enter click the picture below: 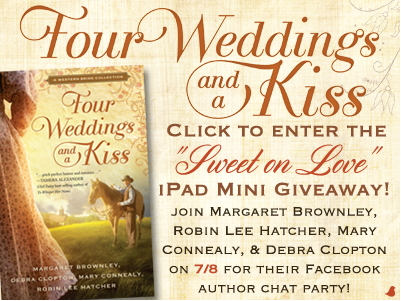