Hi.  Winnie Griggs here.  In one of my WIPs I needed to find a polite parlor activity for my characters to indulge in and after a bit of thought and research, I decided to look into the stereoscope.  And was fascinated by what I discovered.

Did you know that the scientific principles behind 3-D movies had their first practical application as early as 1838?  That’s when Charles Wheatstone patented his reflecting stereoscope.   I’m sure you’ve all seen stereoscopes before, in pictures if not in actuality.  But do you know how they work?
Actually, they work in much the same way human vision works.  Because our eyes are spaced about two inches apart we see everything from slightly different angles.  Our brains, wonderful creations that they are, then process these into a single image with both dimension and depth.
Charles Wheatstone applied this principle to his invention, using drawings that were pairs of reverse images and a series of mirrors to create the illusion of a single three dimensional image.  In 1850, glass images were developed.  Though this was an improvement on the earlier drawings, the quality was still low and the price was relatively high. Queen took a fancy to the device when she saw one demonstrated at the Crystal Palace Exposition in 1851, and suddenly they were all the rage in .  It was somewhat later, however, before the fascination took hold in .  These early stereoscopes were large, bulky and table mounted, requiring a large commitment of space as well as money.

But all of that changed a few short years later.  With the advent of photographic improvements, tintypes, daguerreotypes and flat mount paper became available, greatly improving the quality of the images.   Early attempts had photographers taking one photograph then slightly shifting the camera and taking a second.  The next evolution had photographers utilizing a rig that had two cameras mounted on it to take the twin photos.  Eventually an enterprising inventor created a camera with two lenses

Then, in 1862 Oliver Wendell Holmes and Joseph Bates created a compact, handheld viewer named the Holmes stereopticon and the popularity of stereoscopes exploded.  In fact, by the end of the century, in spite of their expense, you could find one of these devices in many middle and upper class parlors of the time. 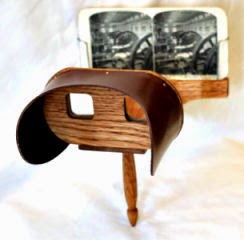 The most popular slides were the travelogue type that depicted exotic landmarks such as the pyramids of and the closer-to-home scenic beauty of .   The marvels of the Chicago Worlds Fair of 1892 and the St. Louis World Fair also made their way onto stereoscopic slides.  As Burke Long put it, “Mass-produced and relatively cheap, the integrated system of mechanical viewer and photographs became fashionable for classroom pedagogy, tourist mementos, and parlor travel to exotic places of the world.”  You could say that, as a form of entertainment, the stereopticon was the Victorian era’s equivalent of today’s DVD players.

By the 1920s movies and the enhanced availability of cameras to the ‘common man’ began to supplant the stereopticon’s hold on people’s  interest.  But the stereopticon survives to this day.    The child’s toy View-Master, named one of the top 50 toys of the twentieth century, is a direct ‘descendent’ of the stereopticon, utilizing the very same principles.

So, do any of you have any first hand experience with a stereopticon?