WHY GET MARRIED IN JUNE (And other Wedding Traditions)? By Cynthia Hickey

Ever wonder why June became the popular month for getting married? Most likely it was because folks didn't smell quite so bad. Yearly baths were usually taken in May as soon as the weather warmed up, thus leaving the bride and groom the freshest they would be all year. Still, body odor did prevail so the brides started carrying flowers. How romantic!

But, as much fun as it is to believe the sweet-smelling reasons above, they aren't true. People bathed two thousand years ago. Maybe not every day as they do today, but summer weddings were most likely the favorite because June was indeed a good time to take advantage of good weather and the arrival of new crops for a wedding festival, as well as fresh flowers for the ceremony and celebrations. The use of flowers in wedding ceremonies goes back to ancient times.
Depending on the culture, flowers have numerous symbolic meanings, some of the most significant being loyalty, purity and love. In the late fifteenth century, roses were popular in medieval Europe for their connection to romantic love and were used in many ceremonies, including weddings. 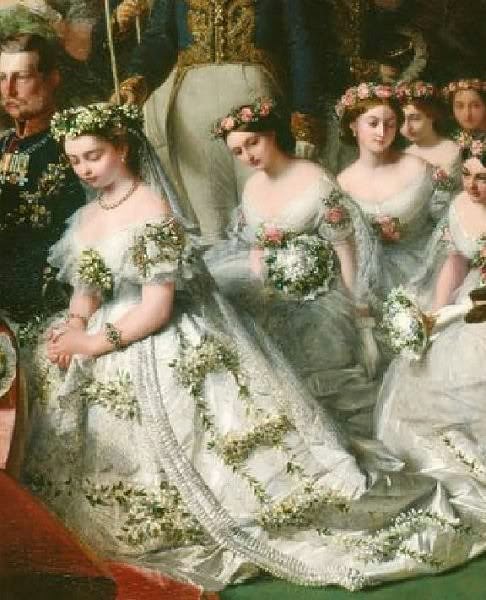 Although engagement rings have been popular through the ages, it wasn't until Archduke Maximilian of Austria presented a diamond to Mary of Burgundy in 1477 that the tradition of offering the most enduring gem on Earth took hold. These days, the majority of brides receive diamond engagement rings.

Other information goes on to explain that the wedding itself and the events leading up to the ceremony are steeped in ancient traditions still evident in Victorian customs. One of the first to influence a young girl is choosing the month and day of her wedding. June has always been the most popular month, for it is named after Juno, Roman goddess of marriage. She would bring prosperity and happiness to all who wed in her month. Practicality played a part in this logic also. If married in June, the bride was likely to birth her first child in Spring, allowing her enough time to recover before the fall harvest.

June also signified the end of Lent and the arrival of warmer weather. That meant it was time to remove winter clothing and partake in one's annual bath. April, November and December were favored also, so as not to conflict with peak farm work months. October was an auspicious month, signifying a bountiful harvest. May, however, was considered unlucky. "Marry in May and rue the day," an old proverb goes. But "Marry in September's shine, your living will be rich and fine."

In the Southern United Sates, April was favored, as it was less hot, and a bride's favorite flowers were in bloom--jasmine and camellia.

Brides were just as superstitious about days of the week. A popular rhyme goes:

Marry on Monday for health,
Tuesday for wealth,
Wednesday the best day of all,
Thursday for crosses,
Friday for losses, and
Saturday for no luck at all.
The Sabbath day was out of the question.

So, whether you believe in annual bathing or daily showers before choosing that all important day, a lovely bride has always labored over choosing the "perfect day".

Why did you choose the day you got married?

Leave a comment for a chance to win a copy of An Unconventional Lady.

ANNIE ROLLINS LONGS FOR ADVENTURE
But her strict mother keeps her close to home, working as a Harvey Girl waitress. Until Dallas Baker shows up in town and takes the job Annie really wants—leading tours through the Grand Canyon. Annie's frustrated, but finds it impossible to ignore the handsome outdoorsman.
With her split skirts and modern hairdo, Annie challenges Dallas's old-fashioned notions of what makes a lady. To his surprise, he finds her delightful, until he learns she has no interest in settling down. Dallas is ready to win her heart, but is Annie willing to fall in love?

Multi-published and Best-Selling author Cynthia Hickey had three cozy mysteries and two novellas published through Barbour Publishing. Her first mystery, Fudge-Laced Felonies, won first place in the inspirational category of the Great Expectations contest in 2007. Her third cozy, Chocolate-Covered Crime, received a four-star review from Romantic Times. All three cozies have been re-released as ebooks through the MacGregor Literary Agency, along with a new cozy series, all of which stay in the top 50 of Amazon’s ebooks for their genre. She has several historical romances releasing in 2013 and 2014 through Harlequin’s Heartsong Presents, and has sold more than 160,000 copies of her works. She is active on FB, twitter, and Goodreads. She lives in Arizona with her husband, one of their seven children, two dogs and two cats. She has five grandchildren who keep her busy and tell everyone they know that “Nana is a writer”. Visit her website at www.cynthiahickey.com