Today, I'm bringing you a delightful post stolen (graciously given) by my author friend, Gina Welborn.

A scavenger hunt is a game in which the organizers prepare a list defining specific items, which the participants â€“ individuals or teams â€“ seek to gather all items on the list â€“ usually without purchasing them â€“ or perform tasks or take photographs of the items, as specified. The goal is usually to be the first to complete the list, although in a variation on the game players can also be challenged to complete the tasks on the list in the most creative manner. (source: Wikipedia) 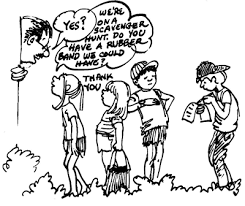 When I was in junior high and high school, our church youth director did summer scavenger hunts. Sometimes we had to walk through the neighborhood asking for items. Other times our hunts were at the mall, or even city-wide. Before the item could be collected, the group had to figure out the clue. St.Patrick Hay meant Green Straw which meant Go to Starbucks and get a straw.

Scavenger Hunts evolved from ancient folk games. Thanks to Elsa Maxwell, they became a popular form of entertainment.

Elsa Maxwell (May 24, 1883 â€“ November 1, 1963) was an American gossip columnist and author, songwriter, and professional hostess renowned for her parties for royalty and high society figures of her day. She developed a gift for staging games and diversions at parties for the rich, and began making a living devising treasure-hunt parties, come-as-your-opposite parties and other sorts, including a scavenger hunt in Paris in 1927 that inadvertently created disturbances all over the city. She also hosted parties in Cannes, Venice, and London, and launched night clubs in England and America.


In the 1930s, in a series of exclusive New York parties, Elsa introduced scavenger hunts and treasure hunts, which created a Society's obsession with them. This scavenger-hunting craze among New York's elite was satirized in the 1936 film My Man Godfrey.

If you have 93-minutes to waste, you can watch it here:

In 1950, the Connecticut Valley Camera Club hosted their annual photographic scavenger hunt. The group was divided into two teams, after which print titles were assigned. The photographers had to bring in print and color slides to fit the titles. The titles, chosen from suggestions given by the group, were Wet Weather, Rendezvous, Street Scene, Sour Grapes, Smoke, and Two of a Kind.

PBS Scavenger Hunt thru History // Match the historical event with the time period in which it happened. // Click HERE to test your skills.


Have you ever participated in a Scavenger Hunt? Tell me about it!

KATIE GAMBLE IS ON THE RUN

After her unscrupulous stepfather accuses her of being a thief, a horrified Katie hopes to hide out until she can prove otherwise. But slipping into obscurity in a small Texas town isn't so easy. Not with Texas Ranger Ward Alston on her tail.
Ward's used to getting his man—or woman. But he's not used to the accused being so resolute in her innocence or so beautifully appealing. As he uncovers the truth, Ward realizes this Harvey Girl isn't all she seems. Together, can they evade danger and obey the law of their own hearts?