Hi!  Winnie Griggs here.  I came across an interesting bit of trivia a while back that intrigued me enough to send me on a research rabbit trail.
Maxwell Henry Aronson was born on March 21, 1880 in .  Max eventually changed his name to Gilbert M. Anderson, but you would probably know him better by the name of the character he played in over 300 films – Broncho Billy.
drifted into acting, working first as a photographer’s model and then newspaper vendor before moving into work as a vaudeville performer.  In 1903 landed a role in The Great Train Robbery by claiming he could ride a horse like a Texas Ranger.  When it turned out he could hardly climb onto a saddle, he was demoted to ‘extra’ and ended up playing several minor parts in the film.  The resulting 10 minute movie found an enthusiastic reception from the general public, and was hooked.  He decided to make his career in the fledgling moving picture business. 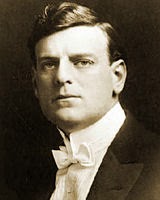 formed a partnership with old friend George Spoor and together they created the Essanay Company (the name is a play on the first letter of each of their last names “S and A”).  This company was destined to become one of the early film industry’s predominant studios.
At first Essanay made comedies, but couldn’t forget the success of The Great Train Robbery and soon he focused on Westerns.  But where really differentiated himself, is that he was one of the first to realize that the public needed a ‘star’ to latch on to, a central character they could really focus on.  But at that time (1909) the big names of the stage were reluctant to risk their careers on the new medium of film.  So decided to take on that star role himself, creating the character of Broncho Billy from ideas he collected for the most part from popular dime novels.  wrote and directed most of the movies himself and within five years he had filmed over 300 one or two reel movies featuring his new character.  Most of these films were distributed simultaneously in the and .  And while was not especially dashing, audiences liked Broncho Billy for his bravery and virtue. 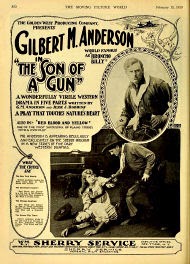 As an interesting side note, Essanay studios also filmed many Charlie Chaplin shorts, including The Little Tramp.
In 1915, ’s final film in the Broncho Billy series, Broncho Billy’s Sentence, was released.  He tried his hand at writing for a while and then later he attempted a film comeback.  But by then more dashing actors such as William S. Hart and Tom Mix had taken over the interests and hearts of movie goers.  So Anderson turned to making comedies for a while before finally retiring from film.

Some of the milestones in his later years:

So there you have it, the fascinating life and times of Broncho Billy.
What about you?  Are you a fan of the western movie genre?  Have you seen any Broncho Billy movies or even heard of him before?  And what is your favorite all time Western movie?
Posted by Winnie Griggs at 12:30 AM