Have you ever wondered how women of the 1800s managed to look they way they did without dry cleaners or department stores? Imagine trying to pull off the wasp waist of the 1950s or the S-curve of 1900 without the proper girdle or corset. Translate this to the 1800's and you can imagine a time when Victoria was the Queen of England instead of a secret place where women shop and men just feel embarrassed. :)

According to Sharon Gooley, expert on antique clothing, the secret to a woman's outfit was not the clothes she wore but what she wore beneath the clothes. A nineteenth century woman often wore multiple layers beneath her frock to achieve the desired silhouette. Often her undergarments alone would weigh 10 pounds or more. No wonder those ladies remained so trim and fit!

Let's examine what a typical woman of the 1800s would wear from the inside out:

Before the layers of undergarments could be piled on, a proper lady would don her chemise. The chemise (later known as a shift) was a garment worn directly over the skin. Looking much like a modern woman's cotton nightgown, the chemise was usually made of white or off white cotton or wool, though chamois was sometimes used in cooler climates. The main purpose of the chemise was to create a layer between the body and the clothing, which was often difficult to keep clean. While the chemise absorbed sweat, the clothing over it would remain dry.

Along with the chemise, some women wore drawers. Starting in about 1840, straightleg drawers were popular. A pair of straightleg drawers were just that: two legs attached to a waistband that either tied or buttoned (sounds a bit drafty to me). Because the ankle was considered a risque body part to expose, these often were long enough to protect the woman's dignity. During the Civil War years, knickerbocker drawers became popular. These were more like the bloomers (though they were not referred to as such by the women of that era) of today though they were much longer and came in close at the knee.

Next came the petticoats - plural. In the 1840s and '50s women would have worn up to 7 at one time to give the desired effect of a full skirt (which gave the waist a smaller appearance). Cording at the hem made petticoats stiffer and, thus, adding to the impression that a woman wore multiple layers of petticoats. When hoop skirts came into vogue, the number of petticoats was greatly reduced, though there were still rarely less than 2 worn at any time. The first petticoat was donned beneath the hoop skirt to cover the limbs (a lady would never refer to them as legs), with a second one placed over the hoops to avoid those embarrassing hoop lines (similar to a modern woman's concern of panty lines). 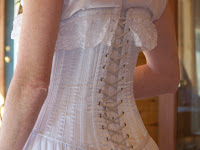 Layer number 4 is the corset, also in white or off white and stiffened with whale bones in the earlier part of the century and metal in the latter part. Corsets were often donned from the age of 3 or 4 for medical reasons. According to the experts of the day, a corset encouraged good posture and thus good health. Say what you will about what appears to be an instrument of torture, but I once attended an event where participants were encouraged to try on one of these fearsome items. The consensus was this garment provided the dual miracles of a drastically reduced waist and reduced back pain. When one considers the work some women of this century performed, it's no wonder they would need an item for back support. The fact that it gave them back their figures and turned the gentlemen's heads was, no doubt, a bonus.

And lest you think of Scarlett O'Hara's tight lacing as the norm, doctors actually warned women about the dangers of lacing one's corset too snugly. In reality, a properly fitted corset should support the back and bust while allowing the wearer to breathe normally. The stories you hear about ladies passing out or unable to sit down for fear of crushing their ribs meant the lady wasn't wearing her corset properly. And should a woman feel her bust a bit inadequate, the 19th century version of the Wonderbra was available in something called an artificial bust enhancer which was tucked into the corset in the proper place (no explanation necessary, I'm sure).

Atop the corset came a corset cover, again of simple construction and generally modest fabric. Its purpose was, as with the hoop skirt, to avoid having the lines of the corset show. This sleeveless garment usually slipped over the corset and chemise and buttoned or tied in the front. For those of you who are counting, this is layer number 5 (number 6 if you've chosen a bust enhancer as a part of your wardrobe). 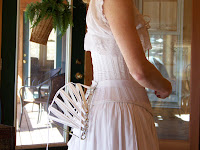 Now comes the bustle. Depending on the year it might be a large lobster-like contraption that tied on at the waist and across the hips. In a different era, the bustle looked more like an inverted hockey helmet that folded to allow the wearer to sit without crushing it.

Is it just me, or are you exhausted thinking of how much effort went into getting dressed?

Do you think it was worth all the trouble women underwent for the sake of fashion?
Which one of the above fashion items would you not mind wearing today to help achieve a certain silhouette?
Have you ever donned any of the above items for any reason? What was it?

BIO
Tiffany Amber Stockton has been crafting and embellishing stories since childhood. Today, she is an award-winning author and speaker who has partnered with Nerium International in the anti-aging industry, helping others look younger and live better. She lives with her husband and fellow author, Stuart Vaughn Stockton, in Colorado. They have one girl and one boy, and an Aussie/retriever mix named Roxie. She has sold fourteen books so far and is represented by agent Sandra Bishop. You can also find her on Facebook and Twitter.
Posted by Tiffany Amber Stockton at 1:00 AM