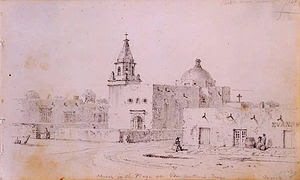 Laurie Kingery here, and this month I'd like to tell you about an attempt at peace between the whites and the Comanches that went tragically wrong, the Council House fight of 1840 in Texas.

The meeting took place under a truce after years of conflict between the Texas settlers and the Comanches. The Comanches wanted recognition of the boundaries of  the Comancheria, their homeland, upon which they saw the settlers encroaching. The Texans wanted release of all the captives that had been taken. The meeting had been asked for by a group of powerful Comanches who approached Colonel Wax Karnes in San Antonio to negotiate a peace treaty in return for captives.

Except for Sam Houston, most Texans did not understand that the Comanches were not a unified nation as they understood one—there were at least twelve divisions of them and thirty-five roaming bands, known as rancherias or villages. There was no unified authority. The Comanches had suffered from the years of war and a smallpox epidemic. They returned a boy as a show of their sincerity. One of the other chiefs, Buffalo Hump, warned that the Texans could not be trusted.

The Comanche delegation arrived for the negotiation in San Antonio on March 19, and consisted of twelve chiefs, warriors, women and children. The warriors were dressed in their best and had painted faces. The meeting took place in a one-story building on the corner of the Main Plaza and Market Street called the Council House. They brought along one white captive child, Mary Lockhart, and several Mexican captive children.

Some Texans reported that Mary Lockhart had been raped and beaten and her nose burned away—though other eyewitnesses reported no such injuries to the child.  Mary reported about other whites who were still captives, and that the Indians wanted to see how high a price they could get for her (before bringing other captives?).  The Texans believed this violated the conditions of the proposed peace treaty as all captives were supposed to be released. The Texans demanded to know where the other captives were. Chief Muguara explained that the other captives were held by other bands, but that he thought they could be negotiated for in return for a lot of blankets, ammunition, and other supplies, finishing with the words "How do you like that answer?"

In response, the Texas militia came into the room and positioned themselves around the walls. The officials said the chiefs would be held until all captives were released, but the interpreter warned them not to deliver this message, for there would be a fight. They insisted it be delivered as they said it, so he left the room as soon as he'd done so. As he predicted, the chiefs attempted to fight their way out of the room, and the soldiers opened fire, while the Indian women outside, hearing the commotion, began to fire arrows. As Indians escaped into the streets, Texans joined in the battle. In the commotion, both Indian women and seven innocent spectators were killed. Of the sixty-five members of the delegation, thirty males, three women and two children were killed. Seven Texans died in the crossfire, and ten were wounded.

There was a German surgeon named Weidman who treated the citizens. He was sent by the Russian czar to make observations about the Texans. After the battle, it was learned that he had taken the heads and bodies of two Indians back to Russia. To do so, he boiled the bodies until they were skeletons and dumped the water into the San Antonio water supply.

A Comanche woman escaped San Antonio and reported back to her camp what had happened, along with the demand that the sixteen captives be released in twelve days. In response, thirteen were tortured to death. The three that were spared were spared because they had been adopted into the tribe. This response took place because native Americans believed a council to be sacred, and that sanctity had been violated by the whites.

When the truce deadline expired, the Comanches brought the three captives back to San Antonio and they were returned to their families. The Comanche jail prisoners were given to families for whom they agreed to work, but they ran away.

In response to the slaughter at the Council House, Chief Buffalo Hump launched the Great Raid of 1840, attacking many villages and killing at least twenty-five settlers and capturing others and taking thousands of dollars worth of goods. The militia responded, and the Battle of Plum Creek resulted, but the raids continued. The Texas Rangers began to be recruited in 1823, specifically to combat the threat of the Comanches. They didn't make much headway against them until they began to fight like the Comanche, and until they got the Colt revolver. During the Civil War, the frontier was rolled back 100 miles because the Rangers had gone to fight for the South.

Those who have read Larry McMurtry's LONESOME DOVE and its sequels will already be familiar with Buffalo Hump and his actions.  I think a quote from the book illustrates the degree of threat the Comanches posed—"If there's ever been a thousand Comanches in a single band, they'd have taken Washington D.C."

One has to wonder how different things might have been if they'd been a little more patient in their negotiations at the Council House. What do you think?
Blessings, Laurie Kingery
Pictures courtesy of Wikimedia Commons