On a Wheel and a Prayer

When you think of the old west, bicycles probably don't come to mind. I mean can you honestly picture John Wayne chasing down bad guys on a tricycle? Yet, the bicycle craze that hit the country in the 1890s was just as prevalent in the west as it was in the east.
The new craze not only changed the way people got around, but also the economy. An editorial in the Fort Macleod Gazette in the early 1890s stated, “If this craze for bicycle riding continues much longer our livery stable men will have to close down.” The same lament could be heard from hatters, dressmakers and carriage workers.

Cowboys, sheriffs and outlaws hopped on the bandwagon—and so did women

One Texas newspaper in 1895 issued this warning regarding female bicycle riders: "We have been watching the course of events with breathless anxiety and Nebuchadnezzar himself never saw the handwriting on the wall more distinctly than we see it now. The bloomer is coming sure enough."

One Kansas newspaper lamented that "Women wear their trowserettes even when their machines are left at home."  While some were criticizing women's attire others like Susan B. Anthony insisted that bicycles "Have done more than anything else in the world to emancipate women."

Bloomers aside, muddy dirt roads and wooden sidewalks made for a wild ride. Newspapers regularly reported people taking a "scorcher" and "being knocked senseless" or "carrying an arm in a sling."

One Texas town responded by adopting the following regulations:

1.Anyone riding a tricycle or relocopede must be supplied with a bell or horn that must be rung at all crossings.
2.Any persons riding a tricycle at night must have a suitable lantern.
3. It is especially prohibited for three or more riders to ride abreast
4. No person or persons shall rest their bicycle, velocipede, or tricycle against a building (including saloons) where the vehicle will be on sidewalks

Some cities imposed a speed limit in town, usually four miles an hour. Fines could be as high as twenty-five dollars. Some regulations created as many problems as they prevented. Not only was there suddenly a shortage of cowbells but the constant ringing posed a nuisance.

It wasn't just riders that gave sheriffs and marshals a headache, but a new kind of outlaw—a bicycle thief. Bicycles were also used as getaways and one thief led his pursuers on a merry chase through Sacramento.

Hold on to Your Stetsons

An Arizona Territory newspaper reported that cowboys in Three Rivers, Michigan "have discarded their horses for bicycles in herding cattle. Cowboys in Arizona would have a happy time herding cattle on bicycles."

Cattle didn't always take kindly to bicycles as one doctor found out when he unexpectedly ran into a herd of cattle. He ended up with a broken shoulder blade and his $100 bike in ruins. Things got so bad that some insurance companies announced they would charge double for bikers.

Some lawmen like Arizona Sheriff Donahue decided to fight fire with fire and announced that he was the proud owner of a "handsome nickel-plated bicycle" and was in negotiations to purchase a Ferris wheel bike for his under-sheriff.  John Wayne will never know what he missed.

I don't know how it is where you live but the bicycle craze has hit my town big time and I recently caught my husband drooling over a $1000 bike. How are wheeling conditions in your town and have you joined the pack?

I'm excited to announce that one of my early historical novels is now an eBook! 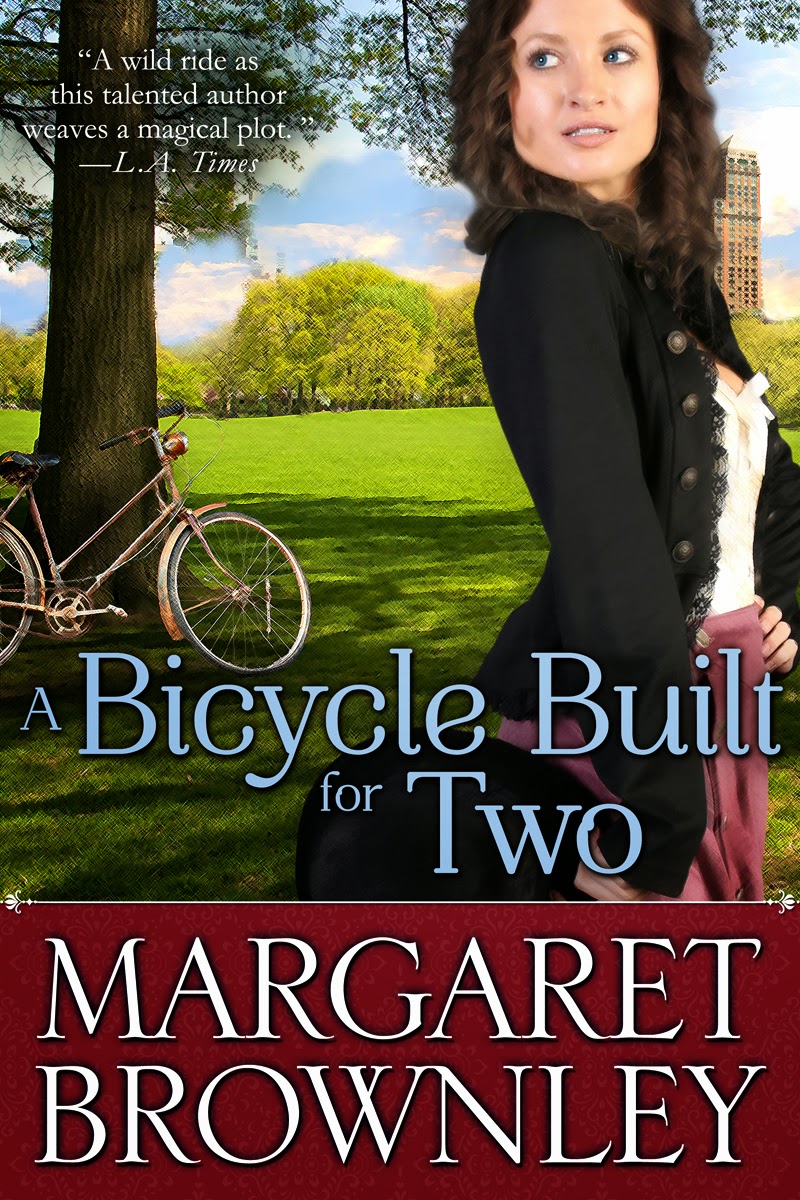 "What was it about yesterday that made you think
I was a gentleman, Miss Blackwell?"-A Bicycle Built for Two

a Rafflecopter giveaway
Posted by Margaret Brownley at 1:00 AM