There’s nothing more pastoral and peaceful than the sight of horses grazing, whether they’re wild or tamed. And nothing more exciting than to watch horses run, whether on a track, along the beach, in a pasture, or across the desert. The pounding of stony hoof beats on a hard desert floor starts with a long, low rumble. Then a whiplash of speed, mane and tail flowing, muscles rippling with grace and power.

A friend once told me of her horse getting tangled in a stallion fight. A vice grip of teeth ripped his hide. His beautiful neck and throat became a puffed mass of dry, curled skin, his head nearly torn off. He had a busted knee and nearly every rib broken.

Another time she told me of running with wild horses. “The sensation’s like trying to capture the wind. No, it’s more than that. Like entering into the whirl of raw freedom and capturing wildness itself.”

A band of wild horses usually consists of a harem of mares and colts and a dashing, spirited stallion. The 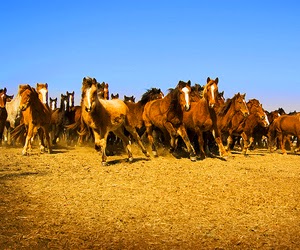 dominant mare leads the band, but always aware of the stallion’s commands. They can make a rapid exodus in an orderly, single-file manner with the aid of the mare. However, there’s a sad fact. If one of the mare’s foals becomes separated from her during a chase, the mare rarely returns. The foal’s left to wander and fend for itself.

An adventurous Indian in the Old West days would gallop into a wild horse herd, lariat coiled over the arm, ready to cast it over the neck. Then he vaulted off his own pony and chased the captive, letting out rope as slowly as possible until the mustang dropped to the ground.

He would hobble the forelegs and tie a thong around the lower jaw. After loosening the lariat, the mustang could rise to its feet to buck, rear, and plunge. But the hobble and thong kept it under control. When the horse stilled, the Indian edged forward hand over hand along the rope until he could touch and stroke the horse. About three hours later, when the captive seemed subdued and resigned to its fate, the animal could be led or ridden back to camp.

Another Method involved control of the newly caught mustang with a thin thong around its muzzle. When jerked, it exerted hard pressure on the nose. The Indian soothed the frightened horse with grunts deep in the chest while he tried to place a blanket on the pony. If the horse protested, he jerked the thong. After a while, he determined the right moment to rest his weight on the pony’s back and swing a leg to mount. 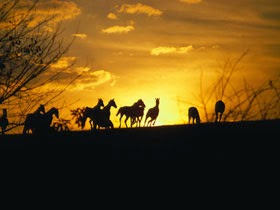 Like the warning goes, don’t try this on your own. Novices getting near wild horses is not recommended. Especially if the stallion of the group whistles with a sharp, loud blowing breath through nostrils, a neigh like a distress call. Or cocks his ears, swishes his tail, and twitches his lips and nose. When every nerve’s taut and alert, his head held high, and tail arched like a pluming banner, stay away. He’s liable to explode, to lunge with gnashing teeth and lightning hooves. He’ll kick like fury with powerful, muscled hind legs.

On the other hand, they can whip away and vanish in an instant if they sniff a scent they don’t like.

~~~~~~~~~~~~
Janet Chester Bly is the widow of award-winning western author Stephen Bly. Together they authored and co-authored 120 books, both fiction and nonfiction for adults and kids. She and her three sons finished Stephen's last novel, Stuart Brannon's Final Shot, a Selah Award Finalist.
Janet’s first solo adult novel, Wind in the Wires, Book 1, Trails of Reba Cahill, will be released in November in paperback, eBook, and audio edition. It’s a contemporary western mystery, a road adventure with a touch of romance.