I hope you had a wonderful Thanksgiving with your family and friends. Paul and I drove 18 hours to Independence, MO. to where our daughter and her family recently moved. On Tuesday we visited the Union Station in Kansas City, MO. So, I thought I'd thought I'd share a tidbit or two from our visit.

The first impression as you drive up to Union Station is "what the heck—why is there a large bug greeting you as you drive into the parking lot?" Personally, I don't know. We didn't find an answer to the question, but it does make you wonder, especially when you see large bugs in the Lionel train sets in the back of the station. (Upon further exploration, I found a link to a large bug exhibit online.) When you step into the station you are awed by the intricate work with stone and architecture. Here's a picture of the ceiling that accents the fine details that went into the creation of this station. Note the chandelier as well. 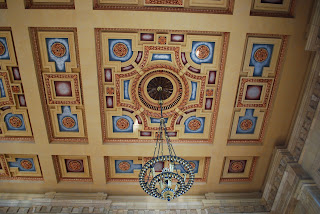 Union station was built in the early 20th century, opening in Oct. 1914, making it 100 years old last month. Here's a link to a timeline with historic pictures of the construction of the station. www.unionstation.org/timeline.
The original station was called the "Union Depot" and opened in 1878.

Kansas City is perhaps the closest location to the middle of the United States as one can get to. Union Station—with the advent of the trains criss-crossing the states—naturally became a hub of the train rails. Today you can still come by train to the station, and there were plenty of trains on the tracks when we visited. There was also a great showcase of Fred Harvey and his restaurants through the display of the china used in the restaurants. Here is a picture of the most common southwestern pattern. 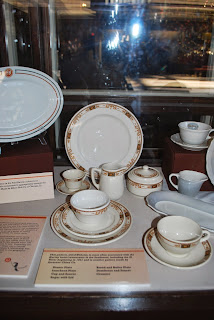 Here is a set of dishes that were commemorative plates of the Grand Canyon which were sold at the Harvey stops. 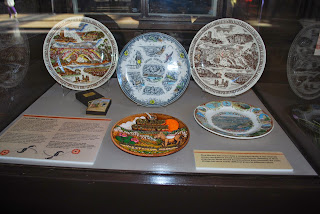 Another marvel of the architecture was the design of the floors: terra cotta design in marble. Here's a sample of the floor. 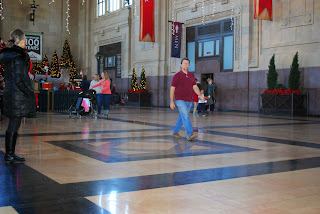 So if you're ever in the area you should take and spend some time at Union Station. There was so much more to explore but our time was limited. I look forward to going there again. As today marks the beginning of preparation for the Christmas season, I'll leave you with this picture of Paul and I at the base of the Christmas tree at Union Station. 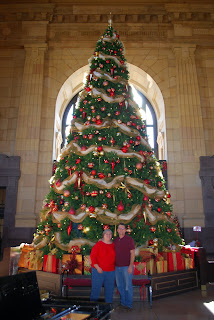 Lynn A. Coleman is an award winning & best-selling author who makes her home in Keystone Heights, Florida, with her husband of 40 years. Lynn's newest novel THE INNKEEPER'S WIFE will be released November 1, 2014. It is the second in her Historical St. Augustine, FL. series. If you are interested in 19th Century Carriages & Wagons follow the enclosed link.
Check out her 19th Century Historical Tidbits Blog if you like exploring different tidbits of history.
Posted by Lynn Coleman at 1:00 AM