The Christmas Truce of 1914

Merry Christmas to you from Jennifer Uhlarik! I hope you all are having a wonderful day with family and friends, and remembering the true meaning of this blessed season.


Perhaps some of you have already heard of the Christmas Truce of 1914, but I was so taken with the story that I thought I would share it with you. It’s such a wonderful piece of history, you can’t help but enjoy it, even if it’s not “new” to you. The story goes like this:


On Christmas Eve, just five months after the start of World War I, soldiers from both sides sat shivering in their respective trenches along the Western Front when the Germans began to sing Christmas carols. The familiar songs carried across the distance to the English, and they also began to sing. It’s said that in some places, soldiers brought out instruments to accompany the singing. Through the night, both German and English troops sang in their respective languages.


By dawn on Christmas morning, a few brave Germans ventured out of their trenches to cross into no-man’s land and approach the Allied forces. At first, the English soldiers were wary, expecting a trick, but they saw that none of the opposing troops carried weapons. Only then did they crawl out of their trenches and step out to meet their fellow man.

These troops converged between their respective sides, shook hands, talked, and even played a friendly game of soccer together. Having nothing other than what little they could carry with them, they exchanged cigarettes and chocolate as gifts. For a brief time, Allied and German soldiers met together in order to celebrate Christmas. It mattered not that later that day or the next they would return to fighting. For that one moment, they were at peace, staring into the eyes of their avowed enemies in order to experience a moment of true peace and harmony.


Please enjoy this brief depiction of the Christmas Truce of 1914 which I found online.


My wish for you this Christmas is that you will also experience true peace as you contemplate the birth of Jesus Christ, the Prince of Peace. May you all be blessed today and all year through! Merry CHRISTmas! 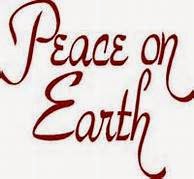