A Step Back to a Time of Elegance.

I’ve written before about the historical significance of my hometown of Lake Geneva, Wisconsin and the surrounding area. Beginning with the Chicago Fire in October 1871, many of Chicago’s wealthy came north to beautiful Geneva Lake to build summer homes that rivaled that in Newport, RI, the east coast retreat of the New York wealthy. For this reason, the area gained the nickname, Newport of the West.

As the years passed on, more wealthy came and built beautiful extravagant homes, some of which have become teardowns, being replaced by more modern mansions. Others are in disrepair. Some have been purchased by people who appreciate the history behind these homes and have endeavored to restore rather than replace. One that has recently gone under extensive renovation to bring it back to it’s glory is a mansion that began it’s life as Wadsworth Hall. Built in 1906, the structure is a magnificent example of stately and classical Georgian architecture. It’s often compared to Thomas Jefferson’s home, Monticello

Built by Norman Wait Harris, organizer of the banking house that later became Harris Bank, he named the home for his wife who had been a Wadsworth and was a cousin of Henry Wadsworth Longfellow.

The following pictures are taken after the recent restoration.

As you can imagine, the interior of the home was especially regal, including a 12-foot wide staircase in the 50-foot wide central hall.

The staircase led to a landing about 20-square feet wide with windows that looked out on the lush landscape designed by the Olmstead Brothers, who had designed Central Park in New York City.

The restored dining room back to it's original design. I can't imagine all the elegant dinner parties that must have taken place in this room.

The property was eventually sold by Mr. Harris to a Mr. Shaw, and then eventually became the property of Daniel Peterkin the president of the Morton Salt Company. Over the years, the property had been maintained, but often tweaked according to the fashion of the current time.

Many of the large estates on Geneva Lake have been subdivided, and to prevent this from happening to this estate, the Peterkin family worked with the Lake Geneva Conservatory to place deed restrictions on the property that would prevent it from being subdivided.

The most recent owner of this magnificent home is investment manager, Richard Driehaus. A number of years were spent renovating the interior back to its original state, and now that the restoration has been completed, Mr. Driehaus often opens the property to charity organizations for fundraisers and events. He also hosts a large Fourth of July party every year, complete with a huge fireworks display that is enjoyed by many locals, in addition to his invited guests.

The home is by far one of the most elegant homes on the lake, classy, even at the street entrance to the estate (shown here) to it’s view from the lake. 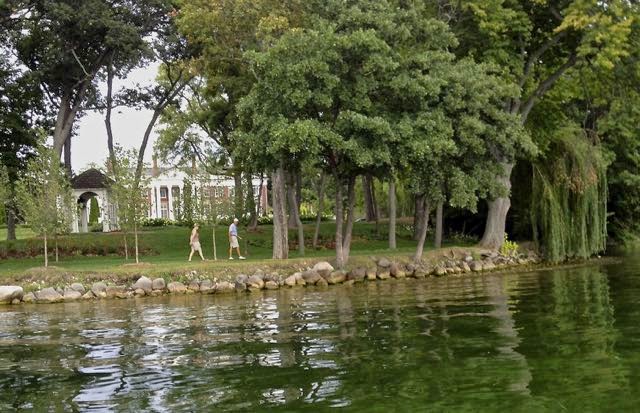 The home is easily seen from the lake or from the shore path, which is open to the public. You can see in the picture people walking across the mansion's front yard on the public shore path. It’s well worth making a point to see this historical estate up close and personal.

A native of Lake Geneva, Wisconsin, author Pamela S. Meyers lives in suburban Chicago with her two rescue cats. She’s an hour's drive away from her Wisconsin hometown, which she visits often to dig into its historical legacy. Her novels include Thyme for Love, and Love Will Find a Way, contemporary romantic mysteries and her 1933 historical romance, Love Finds You in Lake Geneva, Wisconsin. When she isn’t at her laptop writing her latest novel, she can often be found nosing around Wisconsin and other Midwestern spots for new story ideas.