Long before the Native Americans were moved to Indian Territory along the Trail of Tears, the Cherokee Nation organized the regulators to curb crimes like horse stealing, robbery, and to protect widows and orphans. Once they’d been moved to Indian Territory, the Five Civilized Tribes: the Cherokee, Choctaw, Chickasaw, Creek and Seminole, established a law enforcement system and judicial courts similar to what they had in the East. 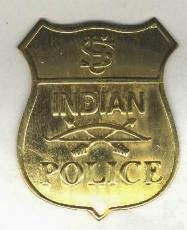 In November, 1844, the Cherokee Advocate, published in Tahlequah, reported that the Cherokee National Council had passed a bill authorizing a Lighthorse Company. The bill authorized the Lighthorse to consist of a captain, lieutenant and twenty-four horsemen, and their main duty was to pursue and arrest all fugitives from justice and then turn them over to the Indian courts to be tried and punished. The Lighthorse were named after Revolutionary War hero, General Henry Lee who was called "Lighthorse Harry" because of his rapid cavalry movements during the conflict. Henry Lee was the father of Robert E. Lee.


In some circumstances the early Lighthorse had to serve as policemen, judges, and jurors. Their job was eased in 1874 by the construction of a national prison in Tahlequah which was presided over by a high sheriff. The Cherokee Nation had a gallows for execution at Tahlequah. The other Indian nations didn't have a prison and used firing squads for execution.

A condemned man would often be released to his family for a year's time and then return for his execution. Most all Indians honored this tradition except a few who escaped their punishment as the era of the Indian nations moved closer to an end.
In 1874, the federal government ordered the consolidation of the four Indian Agents for the Five Civilized Tribes into one posi. The agent was moved into a new building at Muskogee on January 1, 1876. The new office was called the Union Agency. In February of 1880, Col. John Q. Tufts, United States agent for the Union Agency of Muskogee, Indian Territory, organized a unit of Indian police to operate throughout the Five Civilized Nations. The policemen were recruited from the Lighthorsemen from the various Indian nations. The official title for this group was United States Indian Police or U.S.I.P. It is interesting to note that also in the Cherokee, Choctaw, and Chickasaw nations they had county or district sheriffs who were appointed by the Indian political leadership. Many of the larger Indian towns also had constables.

One of the first outstanding Indian police officers was the legendary Cherokee, Sam Sixkiller. At the age of nineteen, Sixkiller joined a Union Indian artillery company under the command of his father, 1st Lt. Redbird Sixkiller, during the Civil War. In 1875, Sixkiller was appointed high sheriff of the Cherokee Nation and warden of the National Penitentiary. On February 12, 1880 Sixkiller became the first captain of the United States Indian Police headquartered at Muskogee, Indian Territory. As captain, Sixkiller had forty men under his command. Besides this position, Sixkiller also held a commission as a deputy U.S. marshal and a special agent for the Missouri Pacific Railroad. Sixkiller's duties included policing the streets of Muskogee, one of the most dangerous towns in the "Wild West." There were more lawmen killed in a fifty mile radius of Muskogee than anywhere west of the Mississippi River during the frontier era.
Here is an example of early Cherokee justice for the crime of rape: For the first offense, the rapist was punished with fifty lashes upon the bare back and his left ear cropped off close to the head: for the second offense, one hundred lashes and the other ear cut off, for the third offense, death.


Due to coming statehood, most of the Indian police powers were given to the federal government by 1898; except for the Seminoles, who only disbanded their Lighthorse shortly after the turn of the century.

Many of the Indian tribes in present day Oklahoma have regained full police powers. The Muskogee (Creek) Nation have resurrected the Lighthorse police. The Cherokee Nation has the Cherokee Marshals Service which is the largest with 14 officers.

Vickie McDonough is the best selling author of 35 books and novellas. Her novels include the fun and feisty Texas Boardinghouse Brides series and the 3rd & 6th books in the Texas Trails series. Her novel, Long Trail Home, won the Inspirational category of the 2012 Booksellers’ Best Awards. Song of the Prairie, the final book in her Pioneer Promises series, set in 1870s Kansas, recently released. Vickie had three Christmas novellas in collections releasing this fall: Westward Christmas Brides, The Christmas Brides Collection, and The 12 Brides of Christmas. To learn more about Vickie, visit her website: www.vickiemcdonough.com
Posted by Vickie McDonough at 12:30 AM