The Man Behind California's Gold Rush

Gold Country greetings from Keli Gwyn. I'm honored to have been invited to join the talented authors who blog here at Heroes, Heroines & History.

I traveled to Coloma, California recently, along with many others eager to commemorate the 167th anniversary of James Marshall's historic discovery of gold back in 1848. 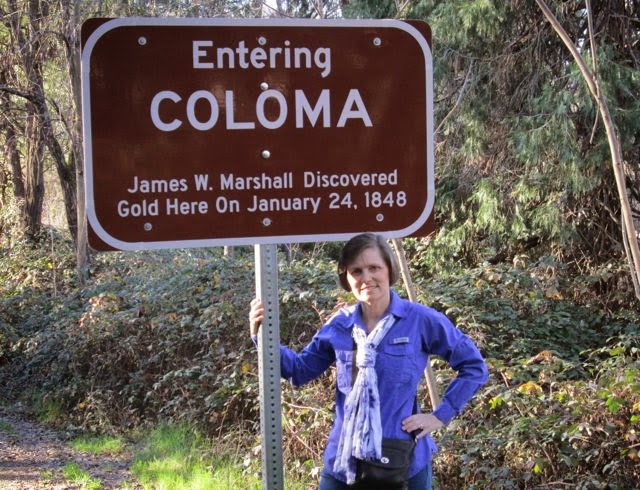 Saturday, January 24 was Gold Discovery Day at Marshall Gold Discovery State Historic Park. The knowledgeable, talented docents and re-enactors were out in force, ready to transport visitors back in time to the rough and tumble days of my state's notorious beginnings. 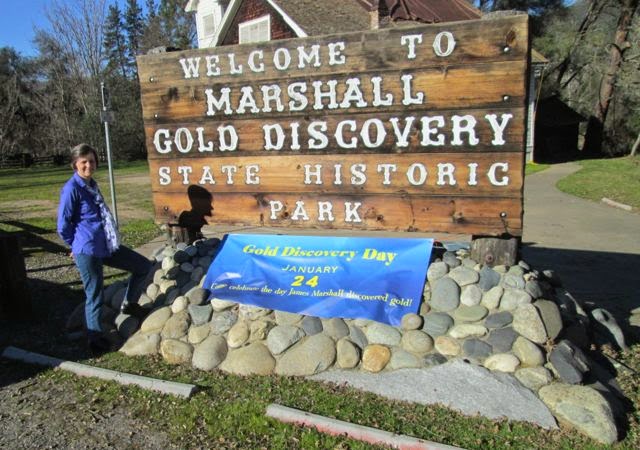 On a chilly January morning in 1848, while inspecting the hydraulically operated sawmill he was constructing in conjunction with his partner, John Sutter, Marshall spotted something glinting in the shallow water of the tailrace (the portion of the mill replica in the foreground of the picture below). 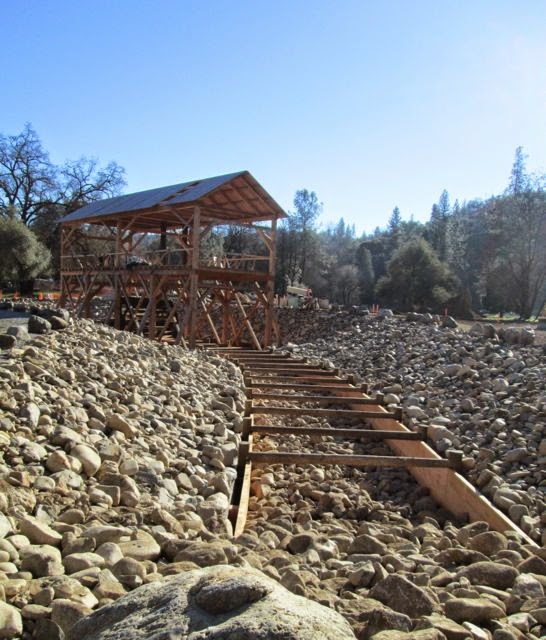 Marshall stooped, picked up the nuggets and wondered what he was holding. Could the shiny pieces on his palm be gold? (The docent let me hold the representative amount of gold Marshall found, about $15 worth. At the time, a man earned around a dollar a day.) 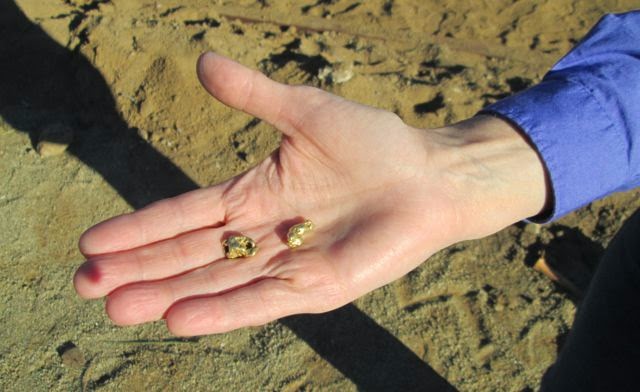 Having never seen gold before, Marshall wasn't sure if what he'd found was actually gold. He proceeded to test the metal by placing one of the nuggets on a rock and smashing it with another. Knowing that gold is soft and malleable, he wanted to see if the impact would flatten his find. It did!

Still unsure if what he'd found was really gold, Marshall sought the opinion of his crew. None of the men in the camp had seen gold either, but they, too, pounded the nuggets. Their results were the same. It appeared Marshall had found gold.

Before he headed down the mountain to Sutter's Fort in what is now Sacramento, Marshall wanted more certainty. The camp cook, Jennie Wimmer, was the only one who'd actually seen gold, having panned for it as a child back in Georgia. She plopped one of the tiny nuggets in a boiling pot of soap, knowing that if the metal was indeed gold, the lye in the mixture wouldn't affect it.

Jennie made her soap, searched the cooled bars for the bit of gold hidden inside, but she found none. Upon further exploration, Jennie met with a surprise. As she said in an interview years later, "At the bottom of the post was a double handful of potash which I lifted in my two hands and there was the gold piece as bright as could be." 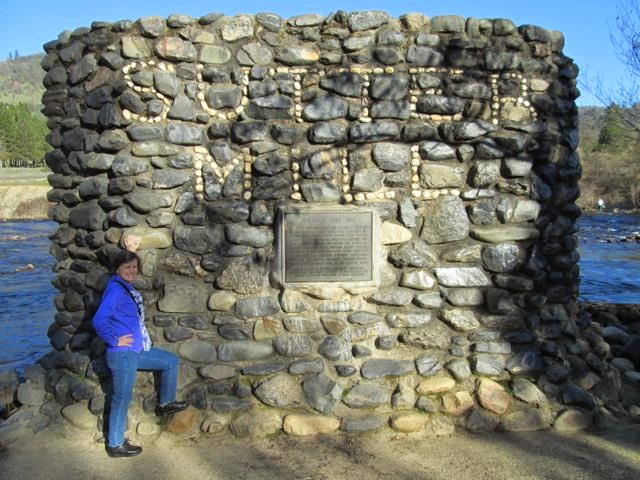 Eager to share his find with his partner, Marshall made the trek to Sutter's Fort four days later. Marshall and Sutter performed further tests and concluded that the metal was, without a doubt, gold.

The two men, knowing they had a mill to complete and operate, decided to keep the news of the discovery to themselves. They couldn't run the risk of losing all their workers or having the mill site overrun with prospectors. They knew, too, that gold had been discovered in California territory before. That discovery hadn't made a huge impact, so there was no reason to think Marshall's would.

Some secrets are hard to keep, though. The news of Marshall's discovery spread like wildfire, sparking a mass migration of epic proportions. Men came from across the country and around the world. In 1848 the non-native population of the California territory was less than one thousand. By the end of 1849 it had soared to over 100,000.

Those pouring into the area came seeking to make their fortunes, but few did. Not even James Marshall. His milling operation failed. His gold mine didn't pan out. His wine-producing venture, although initially successful, dried up due to a series of hardships. He ended up a broke and broken-down bachelor living alone in a remote cabin in Kelsey, California.

On May 3, 1890, four years after Marshall's death, a crowd gathered in Coloma to dedicate a monument erected in his memory, financed by the Native Sons of the Golden West. 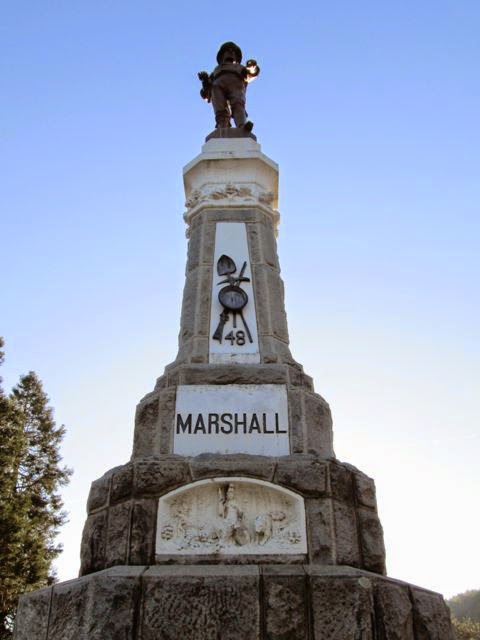 Marshall's likeness, an impressive bronze statue atop a tall stone pillar, is pointing to the spot down by the river where he found those tiny nuggets that altered the course of history and led to the formation of the state this Native Daughter of the Golden West is proud to call home. 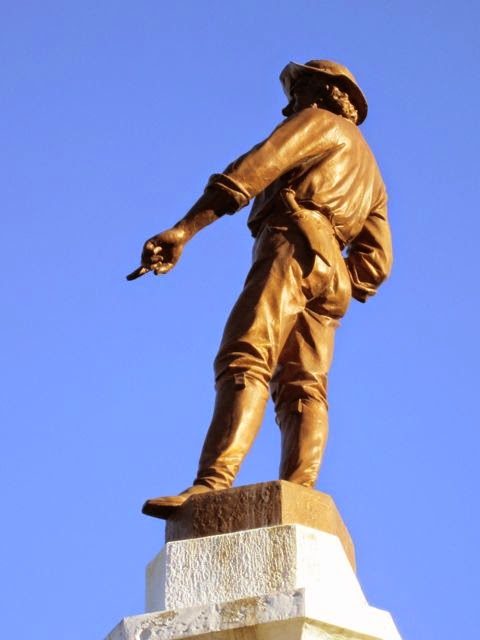 Although the Golden State's history is tainted by greed, mistreatment of the true native peoples and other ills, California went on to become a land of opportunity and has made significant contributions to the lives of a great many.

Were any of your ancestors among the 49ers headed for California?

Have you ever had an opportunity to try your hand at gold panning?

What aspects of modern-day California do you find most appealing? 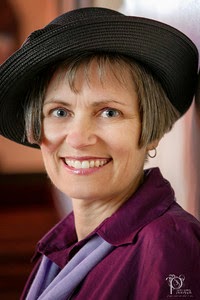 When Keli's fingers aren't hovering over the keyboard of her newfangled laptop, she enjoys strolling past stately Victorian houses in her historic town, burying her nose in reference books as she unearths interesting facts to include in her stories and interacting with other romance readers. Her favorite places to visit are her fictional worlds, historical museums and other Gold Rush towns. She invites you to visit her Victorian-style cyber home at www.keligwyn.com.