Over 150,000 American women served in the Women's Army Corps (WAC) during World War 11. WACs were the first women other than nurses to serve in the United States Army. Both the Army and the American public initially had difficulty accepting the concept of women in uniform. However, military leaders, faced with fighting a two-front war and supplying men for that war, realized women were desperately needed. Women seized the opportunity to make a major contribution to the national war effort. 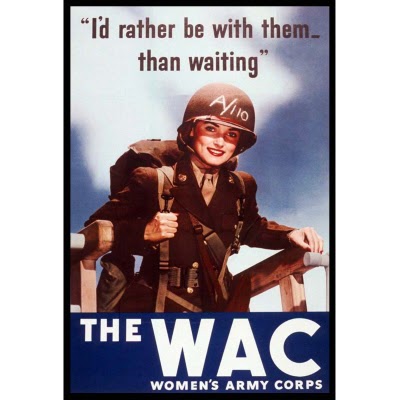 In the beginning WACs were called WAACs, Women's Army Auxiliary Corps. The WAAC bill permitted women to serve overseas, but failed to provide them with the overseas pay, government life insurance, veterans medical coverage, and death benefits granted Regular Army soldiers. If WAACs were captured, they had no protection under existing international agreements covering prisoners of war.

The day the bill became law, Oveta Culp Hobby was appointed Director of the WAAC. Oveta Culp Hobby believed strongly in the idea behind the Corps. Every woman enlisted would be trained in a noncombatant military job and "free a man for combat." Hobby explained, "The gaps women will fill are those noncombatant jobs where women's hands and women's hearts fit naturally. WAACs will do the same type of work which women do in civilian life. They will bear the same relation to men of the Army that they bear to the men of the civilian organizations in which they work." WAACs were to help the Army win the war, just as women had always helped men achieve success.

On 20 July the first officer candidate training class of 440 women started a six-week course at Fort Des Moines. The average officer candidate was 25 years old, had attended college, and worked as an office administrator, executive secretary, or teacher. One out of every five enlisted because a male member of her family was in the armed forces and she wanted to help him get home sooner. Several were combat widows of Pearl Harbor and Bataan. One woman enlisted because her son, of fighting age, had been injured in an automobile accident and was unable to serve. Another joined because there were no men of fighting age in her family. All of the women desired to aid their country in time of need by "releasing a man for combat duty." 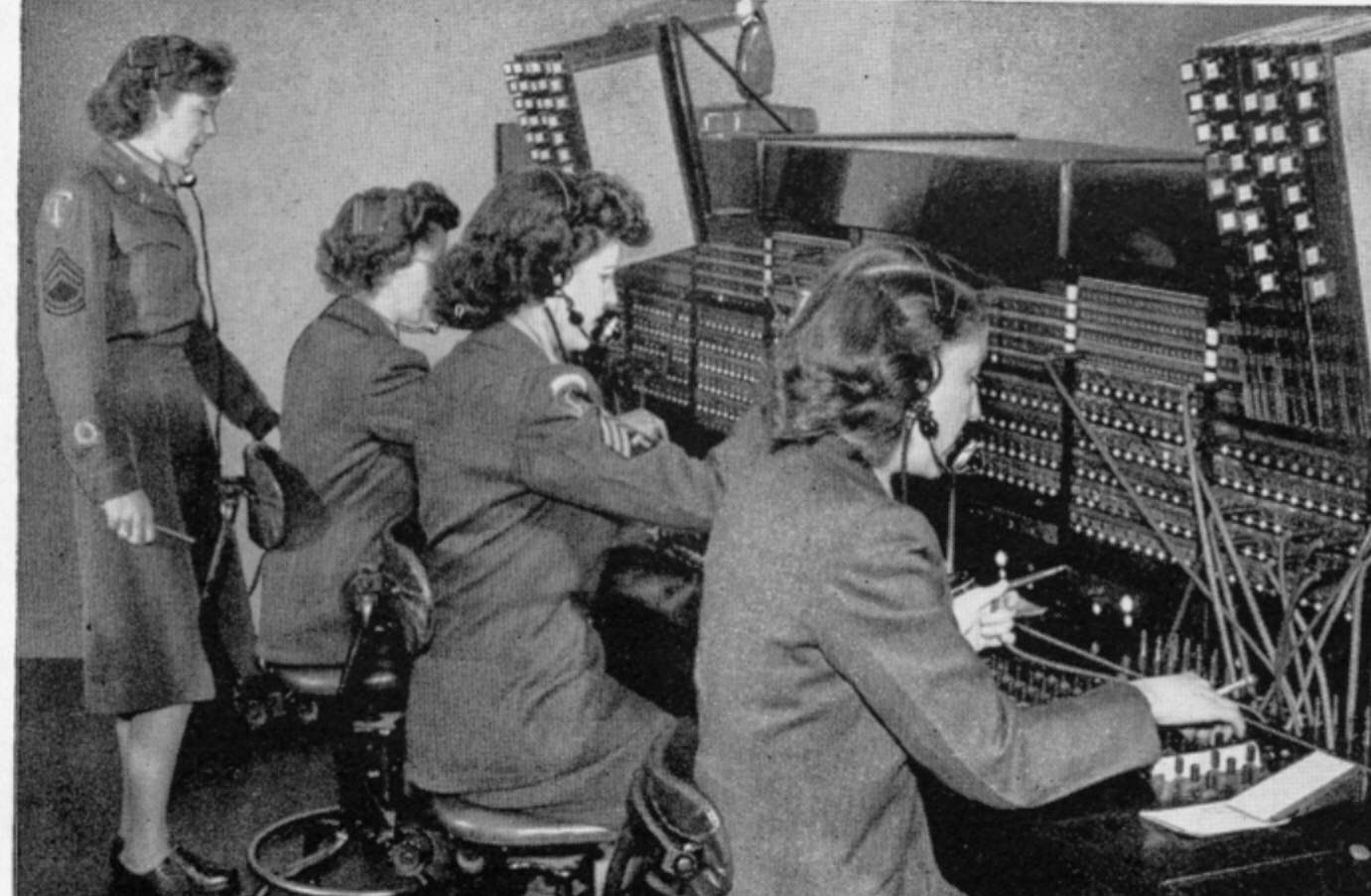 Some WACS computed the velocity of bullets, measured bomb fragments, mixed gunpowder, and loaded shells. Others worked as draftsmen, mechanics, and electricians.

Many processed men for assignment overseas, handling personnel files and issuing weapons. In the words of one WAAC, "Soldiers come in here unarmed and leave with a gun. It gives me a pretty good feeling." WAACs served as boat dispatchers and classification specialists.

Near the end of 1944, women replaced men as radio operators on U.S. Army hospital ships. Female secretaries and clerical workers were assigned to hospital ships soon after.

WAACs assigned to the Chemical Warfare Service worked in laboratories as glass blowers and made test tubes for the Army's chemical laboratories. Others field tested equipment such as walkie-talkies and surveying and meteorology instruments.

WAACs were used as laboratory, surgical, X-ray, and dental technicians freeing Army nurses for other duties.

WACs served in North Africa, the Mediterranean, Europe, the Southwest Pacific, China, India, Burma, and the Middle East. They coveted overseas assignments, even though the majority consisted of the clerical and communications jobs. Only the most highly qualified women received overseas assignments. 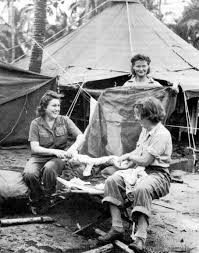 The American press reported favorably on the WAAC, sympathetic to their adjustments to military life and the job and travel opportunities for those who enlisted.

Anti-WAAC feelings originated with enlisted soldiers who did not want to be "freed" for combat. The mothers, wives, sisters, and fiancées of these men were also not anxious to see them sent into combat. They blamed the WAACs and believed the worst rumors about them and repeated such gossip to their friends and neighbors. Thus WACs got a bad reputation.

Many of these soldiers had never seen a WAAC. But they were away from home and facing dangers. Many kept up their spirits by imagining their return to family and community. Which they wanted unchanged! Women in the military represented change.

Rumors said ninety percent of WAACs were prostitutes and forty percent were pregnant.

Americans of the 1940s found the concept of women in uniform difficult to accept. They couldn’t believe the highly skilled office jobs which the WACs held, because such positions carried significant responsibility and people doubted women could handle such jobs.

Women in the Army broke the stereotypes which restricted them, moving into positions outside traditional roles. Overcoming slander and conservative reaction by many Americans, women contributed to the war effort. The 1943 transition from WAAC status to WAC recognized their valuable service.

General Douglas MacArthur, the Supreme Allied Commander, praised the WACs calling them “my best soldiers.” He alleged they worked harder than men, complained less and were better disciplined. . .he would take any number of the WACs the War Department would give him in any future command he might ever have.
Did any female member of your family serve during World War II? Please leave a comment and Anne will love visiting with you. 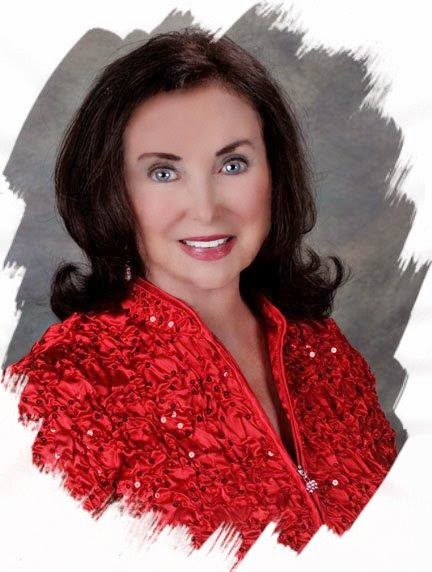 ANNE GREENE delights in writing about wounded heroes and gutsy heroines. ANGEL WITH STEEL WINGS, Anne’s WWII WASP romance about a Women’s Air Force Service Pilot, releases soon. Look for it on Amazon. Anne’s highest hope is that her stories transport the reader to awesome new worlds and touch hearts to seek a deeper spiritual relationship with the Lord Jesus. Anne makes her home in McKinney, Texas. She loves to talk with her readers. Buy Anne’s books at http://www.Amazon.com. Talk with Anne on twitter at @TheAnneGreene. View Anne’s books, travel pictures and art work at http://www.AnneGreeneAuthor.com.

Learn more about Anne as well as get tips on writing award-winning books at http://www.anneswritingupdates.blogspot.com.