Storytelling in the Bardic Tradition

Bardic storytelling had an important role in the history of England, Scotland, and Ireland. Bards were once thought to wield magic, but actually fulfilled a more prosaic function by keeping history and culture alive through storytelling. This was especially important during the cultural decline following the fall of the Roman Empire.

The word, 'bard,' derives from a Gaelic word that means 'to sing praise.' When the term first came into usage, it was not bestowed as a compliment. Bards were considered rootless wanderers. However, the entertaining nature of their offerings, their usefulness to convey oral history, and their acceptance by the nobility soon elevated their status.

As the first writers, bards left behind manuscripts that have become invaluable in giving us an unaltered glimpse into a bygone world. The epic poem, Beowulf, is one example of this type of work, and a collection of ancient Gaelic manuscripts can be found in the National Library of Ireland.

Bards still exist today in many cultures, continuing the time-honored tradition of centuries. They are unique in combining arts, such as music, poetry, acting, sleight-of-hand, sound effects, and creative storytelling. A masterful bard can transfix an audience. A bard is only half the storytelling team, with the listener as the other.

Being transported into a story by a gifted storyteller can seem magical, so it's not difficult to understand why bards were thought to possess supernatural abilities. However, a bard's true power lies in the ability to inspire the readers' imagination. As a novelist, I know that as the lifeblood of storytelling. Right now, I'm studying bardic storytelling in preparation for my upcoming Story Circle Podcast, in which I'll answer the challenge of reading my original fiction in the bardic tradition. 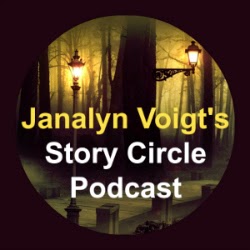 Escape into creative worlds of fiction with Janalyn Voigt. Her unique blend of adventure, romance, suspense, and fantasy creates worlds of beauty and danger for readers. Tales of Faeraven, her epic fantasy series that begins with DawnSinger, carries readers into a land only imagined in dreams. Janalyn is represented by Sarah Joy Freese of Wordserve Literary. Her memberships include ACFW and NCWA. When she's not writing, Janalyn loves to discover worlds of adventure in the great outdoors.

Posted by Janalyn Voigt, escape into creative worlds of fiction. at 1:01 AM