From Babyhood to Boyhood: The Breeching Process

The idea of baby boys wearing dresses is foreign to many modern readers, even those who read historical fiction. Since I've long known this fact, I didn't realize others were unaware of it until my editor pointed that out in the revision notes for my upcoming release, Family of Her Dreams.

Because readers today could have a hard time relating to the thought of a boy in dresses, I used some creative wording to describe the clothing my widowed hero's four-year-old son wears at the beginning of the story. I refer to Luke's garments as "loose-fitting little-boy outfits."

The ambiguity enables me to avoid the word dress, although that's what the garments were, as evidenced in the following picture from 1871. If it weren't for the notation on the back, showing the child's first name as Michael, it could be difficult to tell that he is a boy because of his dress and his long hair. 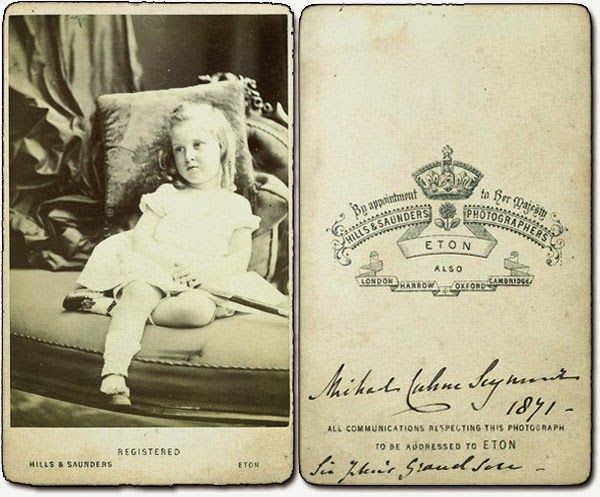 After Spencer's new housekeeper, Tess, arrives, she transitions little Luke into his "big boy clothes," as she calls them. This process is known as breeching, which means to put a boy into breeches, or trousers. Because the term breeching has fallen out of use and the word breech could be confused with breach, as in a breach birth, I avoided them as well.

Although I made modifications to the language in my story, my representation of the breeching process is accurate for the year 1866, in which my story takes place. It wasn't until the early 1900s that little boys' clothing began to differ from that worn by little girls.

For many centuries men and women wore similar clothing. It wasn't until the 1600s that men began to wear separated lower garments that have become the pants we know today. Below you can see Walter Raleigh and his son in breeches and hose. 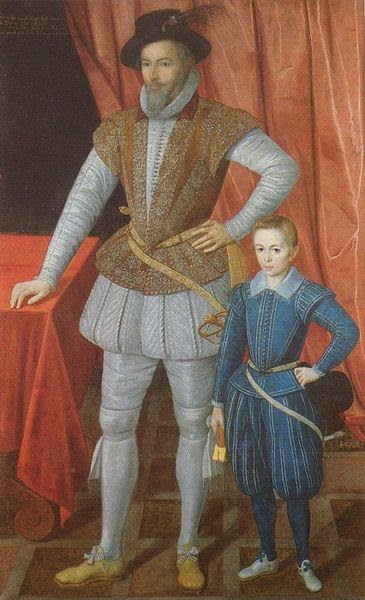 For many centuries men and women wore similar clothing. It wasn't until the 1600s that men began to wear separated lower garments that have become the pants we know today. Below you can see Walter Raleigh and his son in breeches and hose.

Although men's clothing changed, little boys' clothing didn't. Why is that? There are three primary reasons that little boys continued to wear dresses for another three hundred years.

Ease of toilet training is the first reason. Fasteners in days past were more difficult to operate than the snaps and zippers we have today. Little boys would have had a hard time manipulating buttons, hooks and eyes, and such.

Practicality came into play in the second reason as well. Clothing was expensive, and fabric could be hard to come by. The free-flowing dresses could be worn longer than form-fitting items, such as breeches or trousers. The dresses could be passed down from one child to the next, regardless of gender, enabling a mother to get the most use from each garment.

The third reason little boys remained in dresses for so many years is that they were under the care of their mothers at that stage of life. Since dresses had always been worn by boys and girls alike, there was no stigma. Mothers, mindful of the first two reasons, had no motivation to change things.

Several historians point out that a number of mothers preferred keeping their sons in dresses as long as possible. Since their influence over their sons diminished once they were breeched, that's understandable.

So when did a boy become breeched? The age varied. There was no hard and fast rule. Some boys were breeched quite early, at perhaps two years old. This would happen in cases where a parent wasn't expected to live and wanted to see his or her son in breeches before passing. Other boys weren't breeched until the age of seven or even later. This could happen when a mother was reluctant to relinquish her son from childhood.

The general age for breeching was four to six years old. In affluent families a breeching could become quite the event, having been planned for months in advance. Extended family and very close friends were invited. The process often began with a haircut, for until they were breeched, most boys had long hair like their sisters.

After the cut the boy would go behind a screen and be helped into his new big-boy outfit. He would then parade in front of the guests, who would slip money in his pockets, presumably to help with his expenses in life, such as his education. In later years after the advent of photography, a well-to-do family would often have a photograph taken to mark the occasion, such as the one with the proud father and his son below. 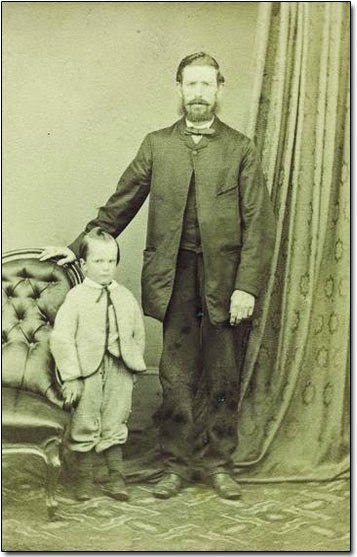 Out in the American West where families were working hard to make a living, a breeching was less of an event, although it was still an important rite of passage. This is the type of breeching I portray in my story.

When a boy was breeched, he would often be put into what were known as short pants, such as those shown in the picture of a mother and her sons below. He would wear those until his next transition to long pants or trousers. It's still the custom in Britain to keep a boy in short pants until he's eight years old. 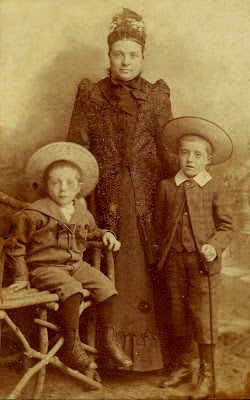 When did the wearing of dresses by little boys end? Surprisingly the practice continued until the 1920s and, in a few cases, into the 1930s. Below is a picture of my father-in-law when he was a baby in 1918. He was the youngest of five boys, so there was no sister from whom his dress would have been passed down, proving the custom of baby boys wearing dresses was still in effect then. 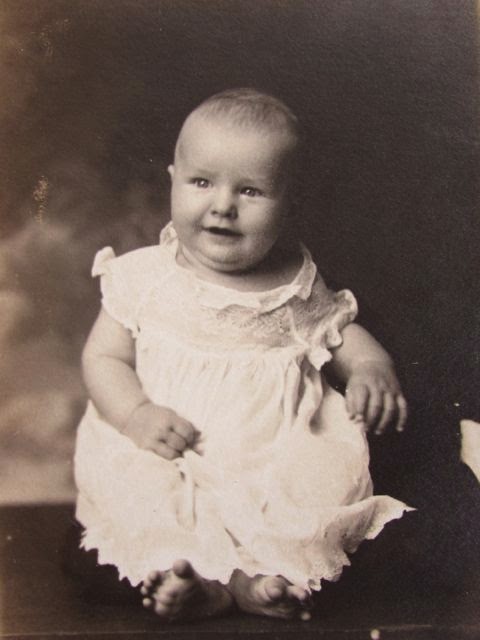 In the picture below, taken in 1920 when Dad was two years old, he's wearing short pants. This indicates that the wearing of dresses by little boys had already begun to wane. I feel certain Dad was the last Gwyn fellow to wear a dress. 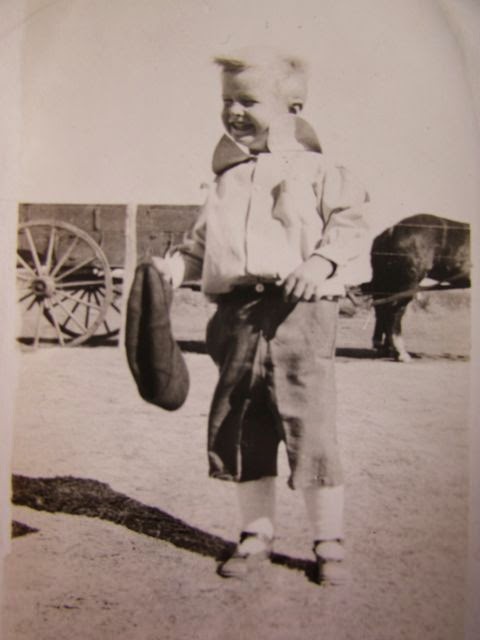 Breeching was a monumental event in a boy's life. In writings of the time, men referred to life as before and after they were breeched. Some have even joked about practicing a certain habit or holding a certain belief "since before I was breeched." When the practiced ended, so did this long-standing rite of passage.

Have you seen photos of your male ancestors wearing dresses as boys?
What rite(s) of passage do boys have to look forward to today?

Award-winning author Keli Gwyn, a native Californian, transports readers to the early days of the Golden State. She and her husband live in the heart of California’s Gold Country. Her favorite places to visit are her fictional worlds, historical museums and other Gold Rush-era towns. Keli loves hearing from readers and invites you to visit her Victorian-style cyber home at www.keligwyn.com, where you’ll find her contact information.

A Family of Her Dreams

Headstrong Tess Grimsby loves her new job caring for the children of a recently widowed man. But she never imagined that she’d fall for her handsome employer. Yet Spencer Abbott is as caring as he is attractive, and Tess can’t help but feel for him and his family. Though, for the sake of her job, she’ll keep any emotions about her boss to herself.

Between his stationmaster responsibilities in a gold-rush town and trying to put his family back together, Spencer has his hands full. He soon finds his new hire’s kind personality warming his frosty exterior. But could he ever admit to seeing her as more than just an employee?

Other images used are public domain or from the author's collection.
Posted by Keli Gwyn at 12:00 AM