Buy a Watch at the Train Station? 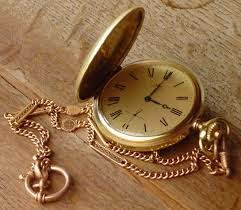 “Hey Sam, I sure do like that watch. I need one too. Didn’t know the mercantile had any.”
“Didn’t buy it at the mercantile. Bought it at the train station. You better hurry if you want one. I hear they’re going fast.”

The train station? Why would anyone go there to buy a watch?  Well it seems that the agent at the North Redwood Falls station of the Minneapolis and St. Louis Railway, a young man named Richard Sears, found himself with a shipment of gold-filled watches that had been refused by a retailer. It was a common scam at that time for wholesalers to ship items to stores which hadn’t ordered them, then offer to “make a deal” for the retailer to keep them to avoid the cost of returning the merchandise. However, the retailer who received the watches refused to accept the deal, so Richard offered to buy them from the wholesaler himself at a reduced cost of $12.00 each.
He then telegraphed other station agents asking them if they wanted a good, inexpensive pocket watch for $14.00 apiece. Sears’ watches sold out quickly, so he ordered more, encouraging his fellow railroad agents to sell them to travelers as well. Within six months he had netted $5000.
Encouraged by his success, Richard retired from the railroad and moved to Minneapolis where he founded the R.W. Sears Watch Company. By placing ads in farm publications and mailing flyers to potential clients,  Richard’s promotional ads persuaded folks in rural communities to purchase by mail-order.
In 1887, Sears moved his company again, this time to Chicago, an important transportation center. The same year, he hired his first employee, a watch repairman named Alvah Curtis Roebuck to repair watches that were returned.
Roebuck became co-founder of the Sears, Roebuck and Company in 1893. Richard Sears was thirty years old at the time.  The pair published the first Sears catalog that year which featured only watches. But by 1897, other items such as clothing, plows, silverware and bicycles had been added.

The 500-page catalog was sent to some 300,000 homes. Sears catered to the rural customer because being raised on a farm, he knew what the rural customer needed. His experience working with the railroad taught him how to ship merchandise to remote areas.

When Richard W. Sears retired in 1908 at the age of 44, the Sears catalog was known as the “Consumers’ Bible, and the Sears’s company’s annual sales was in excess of $40 million.

And it all started by selling watches at the train station.


When I was a child, my mother worked at Sears. I used to look forward to the Sears Christmas catalog with great excitement. What about you? Did you have a Sears catalog?

A multi-published author, Marilyn Turk writes historical fiction about the coastal South. Her fascination for lighthouses spawned her popular weekly lighthouse blog @pathwayheart.com. When not climbing lighthouses, she and her husband can be found camping, fishing, boating or playing tennis.
Posted by Marilyn Turk at 12:30 AM